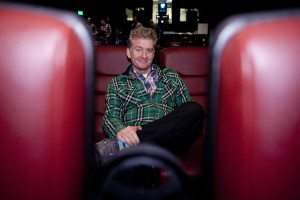 Tim League tries out the seats.

The point being, Tim League, founder and CEO of Alama Drafthouse, is just such a person, and at long last one of his much lauded theaters is opening in San Francisco, officially on Decemeber 17th with…um…what was it? Oh yes, Star Wars. And somewhat less officially they’ve actually already opened as of a few days ago, showing classics and favorites from earlier this year. Why one of those favorites isn’t Mad Max: Fury Road I don’t know, but so it goes. Surely it’ll be coming soon on a double bill with a 35mm print of The Road Warrior (he said with hope in his heart that Creative Manager Mike Keegan is reading this and taking notes). You can find their calendar here.

The New Mission is a hundredish year old theater on Mission St. between 21st and 22nd, and League has had it lovingly restored to resemble as much as possible its original glory. Having taken a recent tour, I’ll say this: it’s real purty. Old timey pillars bracket the screen in the main theater, which seats 326 in big comfy seats, and sports 35mm, 70mm, and digital projectors. The digital one, I am told, is a Sony 515DS Dual 4K, the first in use on this side of the Mississippi. Or so. Which is to say, it’s awful dang fancy, and should have appropriate light levels for both 2D and 3D movies. (Unlike, for example, the Kabuki, which have you been there lately? They must have the worst digital projectors on earth. Makes me feel like I’m going blind.)

Four other screens are upstairs: a hundred seater, and three under fifty. They’re all digital only. All of the Alamo’s theaters are reserved seating. 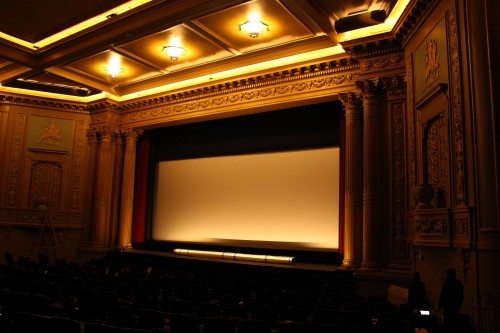 Aside from movies, the other thing Drafthouse theaters are known for is serving food and alcohol to your seats while you watch. Between every two seats is a small table. You write your order on a slip of paper, and stealth waiters serve you. Drinkwise, this sounds brilliant. Foodwise, I admit I’m a bit leery of my neighbor chowing down on a cheeseburger while I’m watching Re-Animator, but considering their exceptionally fancy kitchen and inventive menu, I’m willing to be convinced this is the best thing since the advent of talkies.

The theater features two bars, one in the lobby, and the one serving in the theaters. The 27 beers on tap are all from California breweries, and the cocktails appear to consist of classics for movie viewers, and elaborate, unique drinks in the lobby. Even if you’re not up for a movie, the bar should prove an entertaining spot to argue the finer points of Shaft In Africa and other classics. 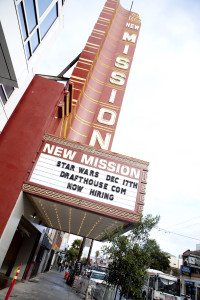 The marquee, all shiny and new.

Now, while true movie lovers have years of practice drinking heavily in dingy rep houses and know not to disrupt, for example, the ant-instigated fourth phase of human evolution with inappropiate joking/talking/barfing, what about, I hear you wisely wondering, the clowns who think watching an archival print of The Mole People is an excuse to get blotto and record their bad jokes live on their iPhones? Never fear. The Alamo has you covered with their No Talking/No Texting policy. You get one warning. Then you get the boot.

Which boot I wish I had handy a few nights ago at the Castro watching a 35mm ‘Scope print of The Keep. Three twenty-something women sat behind me five minutes after it started, spent twenty minutes crinkling plastic and opening beer bottles, and the rest of the movie saying shit like, “Oh my god! Is that Gandalf? That’s Gandalf! Oh my god!” This is not to say one shouldn’t laugh during The Keep, because holy god, have you ever seen The Keep? But there’s a line, people, and movie lovers know not to cross it.

The movie love doesn’t end with the theater. The Alamo is also partnering with Lost Weekend Video to offer movies for rent from both the Lost Weekend collection and the Le Video collection (which they just bought all 90,000 titles of) in their lobby. No doubt they will focus on the weird and obscure.

The new New Mission Theater is aiming high. Here’s to hoping League and Keegan and everyone else they’ve gathered together pull it off. I expect they will.

One response on “Alamo Drafthouse Re-Opens The New Mission Theater”