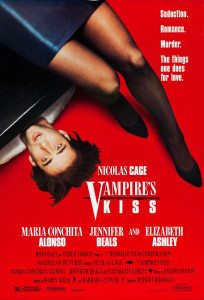 I do not wish to alarm you, but Nicolas Cage‘s eyes can get awfully wide. So wide, in fact, that you will fall into them and — once within their googly, madness-inducing wateriness — lose your grip completely. You will flounder wildly for a lash, scream for someone to throw you an eyeliner, but it will be far far too late.

You will, like Nic Cage in Vampire’s Kiss, go absolutely bat-shit crazy.

Vampire’s Kiss is a film infamous for Cage’s wide-eyed, unhinged performance. It is a film that NIC CAGE is famous for acting CRAZY in. Nic Cage. Acting crazy. Famous. So yeah. I had to watch it.

It does not disappoint. From its first moments it is clear that Vampire’s Kiss will not be stingy with the goods. It will slather the world with its lunacy. It will puke nutsy-cuckoo all down the front of your shirt. It will provide, frankly, genius-level madness.

It will make you crazy, not like a fox, but rather crazier than a fox and foxier than the Krays. You will be so nuts that you will lap the insane and understand madness anew. Or at least afresh.

The story is darkly comic and on purpose. Cage plays literary agent, Peter Loew, a misogynist Lothario and chronic seeker of psychotherapy. His life consists of a cycle of boning someone he just met, screaming at people in his office, and then going to see his shrink (Elizabeth Ashley). This pleasant routine gets disrupted when he sees a very sexy bat.

Nic Cage’s Peter Loew is the short of fellow who talks like Derek Zoolander after he’s been debilitated by a massive stroke. His is a Cary Grant-style accent, plucked from nowhere and committed to with religious fervor. It is the sort of accent that always carries a roll of quarters so it can catch the space bus to Spanklebonk 6. Loew, before his life goes psychotically sidewise, is none too stable. After his refreshing mental dissolution, the man could gibber for America in the International Headcase Games.

At the beginning of this tale, Peter’s night of drunken humping gets interrupted by a bat that gives him a woody. Soon thereafter, he picks up a foxy lady named Rachel (Jennifer Beals). Loew slowly comes to believe Rachel is a vampire and that she has bitten him, because he is out of his fucking mind. Robert Bierman’s film indicates this by allowing Nic Cage’s eyes to envelop the universe.

What happens and what only gets imagined in Vampire’s Kiss isn’t too challenging to figure out, and yet this challenge completely overcomes Mr. Loew. He loses his bat shit, frequently, and without delicacy. At the office, he tortures his meek secretary, Alva (Maria Conchita Alonso) out of the need to vent his highly pressurized yarbles. He forces her to work hard and to stay late and, also, he chases her around the building like a pack of wild dogs wearing blindfolds and tied together with jumbo-sized rubber bands.

As the film progresses, Loew falls deeper and deeper into madness. You will have a hard time believing that this is possible, but I tell you: Nicolas Cage.

His is a performance both utterly crazy and not crazy at all. Cage acts the sort of nuts that screams nuts. He acts cinema crazy, like a man who is going crazy because he knows he is going crazy. He acts crazy as a loon crazy, or at least its guano. He eats a live cockroach (two, really). He starts sleeping under his overturned black leather couch. He destroys his apartment (really). He buys some drugstore-style plastic vampire teeth and wears them out, in both senses.

In and through this madness, Loew commits despicable acts.

Just as in the brilliant American Psycho, Vampire’s Kiss‘s central character is bonkers, and his insanity — combined with his 1980s’ socially normative shittiness — leads him to misconceive his relationship to and with the world. Said more simply: his brain unleashes its sick fantasies and cannot then wind them back into their cage. 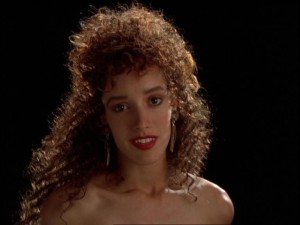 The joke in American Psycho is that Christian Bale‘s Patrick Bateman only imagines his acting out; his emasculation is real. He is no serial killer, just a schmuck who will never dominate anyone. In Vampire’s Kiss, Peter Loew is not nearly so lucky. His emasculation is both less complete and, as such, too much for him to bear passively.

This makes Vampire’s Kiss harder to laugh with but easier to laugh at. The joke, however, is the same one.

While Bateman thinking he’s an axe murderer is much subtler — and better realized — than Loew acting a vampire, Cage acting like Loew acting like a vampire is some kind of deranged genius. Whether or not Cage was in on the joke is hard to say. He appears to have been too high at the time to even remember.

But Vampire’s Kiss. It is not good, except that it is great. Watch it for Cage playing Cage on a headful of Cage. Watch it understanding that there is no escaping some kinds of crazy. That some kinds of madness cannot be buried in the basement. Bat-shit crazy is gonna get you, because it must.

And hopefully with a stake through the heart.

One response on “Go Bat-Shit Crazy with Vampire’s Kiss”