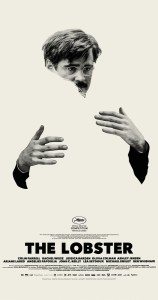 Yorgos Lanthimos’ new film The Lobster is only as crazy as you are, but that’s more than crazy enough.

Like his earlier films — Dogtooth, in which a patriarch isolates his grown children from the world in a perverse suburban Eden; and Alps, in which a group of people imitate the recently deceased as part of a questionable business model — The Lobster takes the real and shakes it like a snow globe filled with dandruff.

It is, in two words, beautifully icky.

Lanthimos’ subject in The Lobster is love. That and the societal pressure we all face to find it, keep it, and treasure it regardless of its actual worth. Sorry romcom fans! You’re just as likely to fall head over heels in love with Miss Right as you are to be biologically processed into a creature of your choosing — let’s say a lobster. 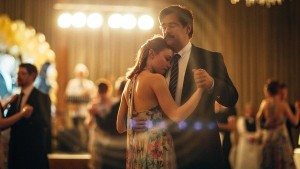 In the world of this film everyone simply must be half of a couple. As in: by law. If they cannot find a suitable love partner — someone who shares their propensity to bleed from the nose or who also has an affinity for soft-shoe dance routines — then they get taken into the Transformation Room and animalized ungently.

Our protagonist, David (Colin Farrell), begins the film by getting thrown over by his wife. With all due depression and resignation, he packs up his brother — now a dog due to his unlovability — and heads to the charming all-inclusive hotel to which singles are shunted. There, said singles spend their days looking for love and their evenings hunting escaped loners with tranquilizer guns. Or, at least, they do that until their allotted time runs out and they’re turned into a peacock or a tapir or whatever. 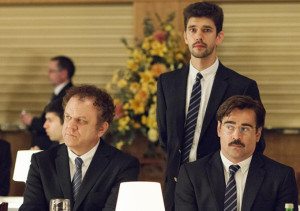 But David wishes to be a lobster if it comes to that. He likes the sea and lobsters live a long time and remain fertile. It sounds idyllic, no? Wouldn’t you like to be a lobster?

Maybe, instead, you could just love me forever?

At the hotel, David slums with other singles, notably the two sad sacks played by Ben Whishaw and John C. Reilly. He is wrangled by the hotel’s manager — Olivia Coleman — and commented on, in voice-over, by a yet-to-be-revealed character played by Rachel Weisz. Around him pathetic people seek pathetic love so they can rejoin pathetic society and fit in.

It is this first half of the film, in which these unfulfilled people seek companionship with a strange sort of listless insistence, that is the darkest and funniest and most wrongly right. 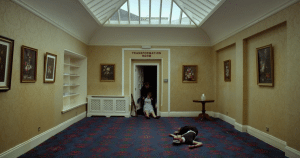 Lanthimos, who also co-wrote the script, is brilliant at isolating the quirks of our society and vivisecting them until they become almost but not quite unrecognizable. This hotel, this pressure, this insistence on what life should be and with whom and why: that’s you. That’s us. You are right there, hoping to connect the dots or, if not, at least become the sort of animal that won’t depress you too greatly.

Just not another dog, please. Have some creativity. Know thyself.

And — if you would — think back to the film’s creepy opening sequence in which a woman drives through the rain to find a mule, so she can shoot it in the head. What did that mule ever do to her? Ah, well. See. Yes.

The Lobster gets awfully itchy through this first half. It slowly but surely nudges you towards a place you do not wish to see or go or even admit exists. Parts of it are deliberately heartless. Parts of it are as surreal as Buñuel. All of it is awkward and morose and bleakly hysterical in a way that won’t make you laugh out loud once.

Then, in the film’s second half, David flees the hotel to live in the wilds of committed singledom with the hunted loners. This community is as bizarre and severe as the one of the couples; no flirting, no relationships, and certainly no sex — upon pain of razor-slashing revenge. 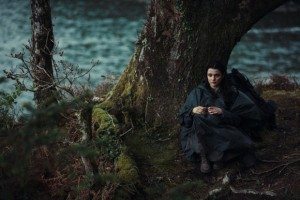 Naturally, here David falls in love with Weisz’s character for reasons that are as arbitrary as love itself. Both she and David are short-sighted, and that isn’t an affliction chosen coincidentally. And here The Lobster loses some of both its grim humor and heartless direction. It does not go bad, it just flags. It becomes as listless as the hotel’s guests, doing what it must because it must, and not out of affection or desire.

In it’s own way, that is also funny. And right. And less satisfying than one might hope.

The Lobster is a carefully made film of oblique ideas left unclarified. You figure it out, or don’t. Enjoy the severe scenery captured on film, wild and rough, if you care to. Enjoy the subtle performances, tightly wound, I’d suggest. Enjoy the brutality of eternal love. Or fuck it. There’s no law that says you need to love it, or anyone, is there?

6 responses on “The Lobster: Love It or Else”