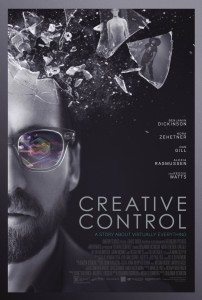 The more you seek to control, the more you are controlled. Such is the message of Creative Control, a sleek, stylish black-and-white feature from writer/director/star Benjamin Dickinson set in a near future NYC in which computers and cell phones exist as clear plastic rectangles, their images visible from either side. Dickinson plays David, a climber at an ad firm tasked with marketing Augmenta, a Google Glass competitor its creator claims overlays a new version of the world over the old. David’s strategy is to give the glasses to a true artist, Reggie Watts (playing himself), and see what he comes up with. Meanwhile, David takes home a pair for himself, to test out the product’s possibilities.

So, like any man given a new electronic toy, David uses Augmenta to achieve a better wank.

David’s got a thing for Sophie (Alexia Rasmussen), girlfriend of his lecherous fashion photographer pal, Wim (Dan Gill), who when not photographing models is banging them. David’s own girlfriend, Juliette (Nora Zehetner), is a new-agey yoga instructor he’s sick of. With the power of the Augmenta glasses, David goes about programming a more or less realistic 3D image of Sophie he can faux-fuck, while in real life he texts her with creepy frequency suggesting a tryst in the Wythe hotel.

Given the set-up of the film, along with its beautiful, stylized cinematography, I expected David to lose track of reality and for we the audience to lose it with him. But Creative Control never goes down that road. Despite its future-tech premise, the tech plays no role beyond the thematic one: as tech more fully connects us to everyone else, we become more alienated. I’m not sure why it needed to be set in the future to deliver its message. 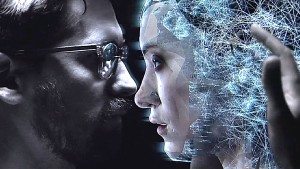 Making out with digital Sophie

Briefly, toward the end of the film, David confuses a fake tryst with reality. But it doesn’t play plausibly. We see David at the Wythe with his digital Sophie creation, and though visually it’s a beautiful image—Sophie appears real from the front while her backside bristles with fizzing digital noise—there’s certainly no mistaking it for reality. I wonder why Dickinson didn’t take a page from Cronenberg, who in movies like Videodrome, Naked Lunch, and eXistenZ presents uncertain realities subjectively, putting the audience in the same place as his protagonists.

Confusing the audience is not Dickinson’s intent. He means to show David’s disengagement with real life, and though the message is clear enough, it never resonates emotionally. The movie winds up playing like a too simple love triangle. David’s relationship with Juliette is presented as a series of arguments, his wishful relationship with Sophie as flirting and lonely tech-aided wanking. While facilitated by Augmenta, David’s obsession with Sophie isn’t caused by it. The same story could be told with David wanking to a stolen photo. Which undercuts the theme that tech is to blame for increasing alienation. David appears to be an obsessive mess regardless of his magic glasses. 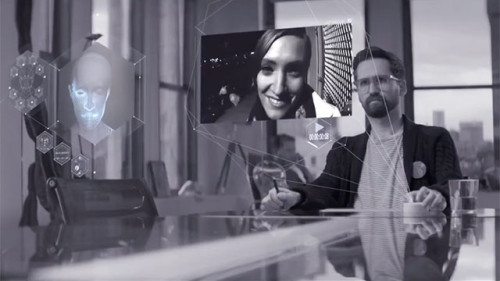 Computing in the future

It’s hard not to think of Her watching this. I didn’t love Her, but it digs into our increasingly intense relationship to technology much more organically and emotionally than Creative Control.

Creative Control itself comes across as nothing more than a beautiful veneer. Dickinson directs with confidence and vision (with one rather odd Kubrick reference—David walks down a hallway carpeted with the pattern from The Shining while music almost but not quite identical to A Clockwork Orange’s plays—the meaning of which I didn’t catch), the dialogue is sharp, the acting excellent across the board. But with its promise of Augmenta’s new layer of reality never remotely realized, and the thinness of the love triangle driving its story, I was often bored. I’ll be interested to see where Dickinson goes next, though. There’s a lot to like in Creative Control, even if, overall, it doesn’t take its premise far enough to resonate. 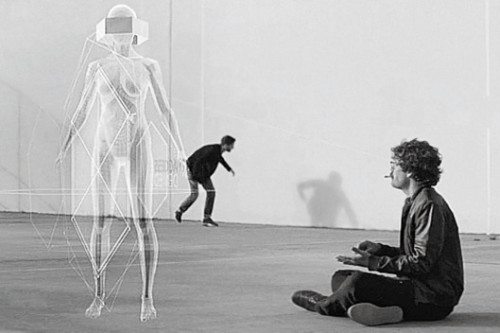