Imagine a dark, serious movie about a man losing his mind. Picture a scene of him sitting on his bed in his shabby apartment, holding a plastic doll in his hands, half humming/half singing some random melody. His singing becomes more and more intense and maniacal until he breaks the doll in half. Nothing funny about that. Just a disturbing scene of blossoming lunacy.

Now imagine that same man is dressed as Santa Claus, imagine he’s tormented by the knowledge that some people don’t love Christmas, imagine it’s a holiday toy in his hands, and imagine the song he’s insanely singing just the melody of is “Here Comes Santa Claus.”

Presto! You’ve got comedy! And yet…it’s a strange kind of comedy. 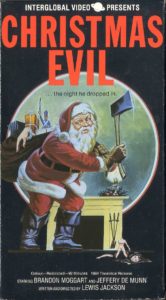 Christmas Evil (’80) is a strange kind of movie. It’s advertised as a slasher flick, but it’s not. It’s barely a horror movie, save a handful of killings. What it is is a picture of a man slowly going crazy. It’s just that his craziness is focused on Santa Claus.

Writer/director Lewis Jackson walks a fine line here, and does it with surprising style. The whole movie plays like the scene above. Jackson doesn’t try to milk laughs out of the set-up. He understands that the laughs are built-in. Santa doing anything horrible is automatically funny. You don’t need to work for laughs. If, for example, a man dressed in a Santa suit kills a bunch of people in front of witnesses, you’re going to have a police line-up of Santas. A police line-up isn’t funny. But when it’s a line of Santas? The laughs are there for the taking. Not needing to work for them, you can focus on telling whatever real story you want to tell. In this case, the tale of Harry Stadling (Brandon Maggart), who as a boy learned that Santa Claus wasn’t real and never got over it.

Harry sleeps year-round in his Santa pajamas and works at a toy factory. But this year, something is wrong. The toys he makes are crap, and his co-workers don’t care. Watching the Thanksgiving day parade with its mighty Santa float, Harry snaps. The world needs Santa. And Harry needs to be Santa. 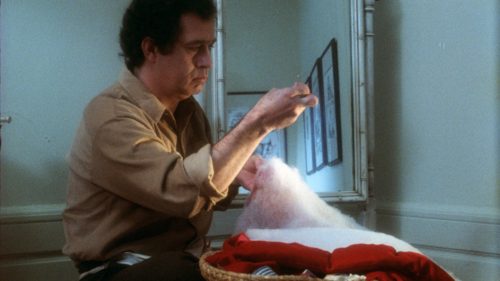 And what does Santa do? He rewards the good, and punishes the bad. Good children get presents, bad adults get whacked. They’re bad bacause they don’t love Christmas. They lack the proper spirit of kindness and giving. Christmas Evil is a movie about loving the Christmas spirit—or being killed because you don’t. Which is to say, it’s as pro-Christmas as It’s A Wonderful Life.

As played by Maggart, Harry is a very sympathetic character. He’s also unpredictable. He’s not a killer for killing’s sake. The movie is so unusual you never know what he’s going to do next. A scene where he dances with children shortly after hacking three people to death is deeply unsettling. It’s real, is what it is. Harry doesn’t feel movie-crazy, he feels like a real person, one who’s slipped a few gears and might do anything. Is he going to lose it while he’s dancing? Is he going to kill one of these nice parents in front of their children? You won’t know what’s going to happen until it happens. 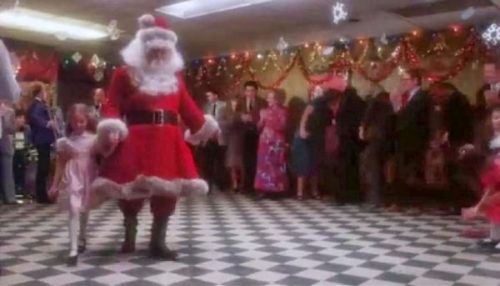 Homicidal Santa dances with the children

It was only last year I first watched Silent Night, Deadly Night (’84). It’s delightful in exactly the way you expect a knowing Santa-based horror movie to be. It’s trashy in all the right ways. You have to respect a movie that has Santa Claus gunned down by police in front of an orphange not once, but twice. Silent Night, Deadly Night is fully tongue-in-cheek, with a few scenes bordering on pure exploitation. It’s a lark. A sick one, but a lark all the same. Christmas Evil is an entirely different animal. It plays out as nothing more than a sincere, albeit very odd, character study. One shot and edited with real care.

So in Christmas Evil there’s nothing as straightforward as cops gunning down Santa. The townspeople realize a man dressed as Santa is on a killing spree, and decide to take action. Cut to a shot of one man lighting a torch. A torch? Oh my word, I said to myself. Is there about to be a scene of angry, flaming-torch-wielding townspeople chasing Santa Claus through the streets like he’s Frankenstein’s monster? You bet there is. That is movie-making, people.

Then there’s the final shot, which I won’t give away. It’s the same as so much of what comes before. Grim, serious, sad—but with one little twist that changes everything. The spirit of Christmas is strong in Christmas Evil. It is truly a perfect B movie. I’m going to have to make this one a new yearly tradition. 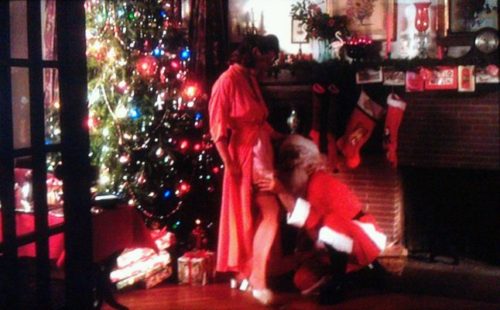 A boy’s indelible memory of Christmas