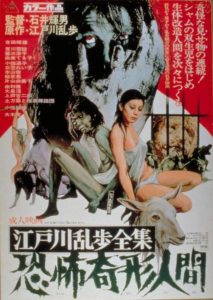 Needless to say, there have been and continue to be some awfully weird things going on in Japanese popular cuture. One of what must be the weirdest is Teruo Ishii’s 1969 film, Horrors of Malformed Men. Which let’s call a variation of sorts on Wells’s The Island of Dr. Moreau. Mostly it’s not anything like it whatsoever, but it features a madman on a jungly island making weird human/animal hybrids, so surely Wells was an inspiration. More directly, it was based on stories by Japanese writer Edogawa Rampo (whose nom de plume reflects a Japanese pronunciation of “Edgar Allan Poe.”)

It was banned in Japan when it came out, and stayed that way for decades. Presumably it’s okay to watch it now (or in any case, easy to come by), but it really freaked people out at the time, one must suspect because, in part, the creatures made by the mad doctor Komoda (Tatsumi Hijikata) are suggestive of atomic bomb survivors.

Komoda’s monsters aren’t actors in animal masks or prosthetic limbs. Some appear physically normal, but are painted wildly and behave like animals. Others are far more disturbing, like the goat-people and the young woman he grafts to a monstrous-faced man to create his version of Siamese twins.

This happens. For example.

That woman happens to be the daughter of Komoda’s one-time wife, fathered by a man she had an affair with. When Komoda found out, he shut them both away in a deep dark island cave. The man died. His corpse was eaten by crabs and spiders, and his wife lived by eating those same crabs and spiders. Then she gave birth.

Before the affair she and Komoda had a son, Hirosuke (Teruo Yoshida), whom Komoda shipped off to Tokyo to study medicine. Once becoming a surgeon, imagined Komoda, Hirosuke would return to the island and assist in creating monsters with his dear old dad. And now here he is. How lucky for everyone.

Hijikata’s performance as the madman is uniquely creepy. Wearing a glittering silvery wrap, he moves like a half-snake/half crab, all lithe and jittery at the same time, with expressions demoniacally possessed, long hair, and a devious mustache.

As Hirosuke, Yoshido acts the opposite end of the spectrum: cool and calm with little expression. We meet him at an insane asylum surrounded by naked writhing madwomen, one of whom plunges a knife in his chest. Because how else would you open a movie like this? He’s haunted by memories of a rocky coastline, but has no idea who he is or where he came from or how he ended up in an asylum.

He escapes, and then, wouldn’t you know it, learns that a rich man named Genzaburô Komoda died, a man who looks identical to Hirosuke. Certainly the only natural thing to do in such a situation would be to travel to the rich man’s estate, dig up his grave, steal the clothes he was buried in, lie down next to the headstone, and wait to be discovered and mistaken for the apparently not-quite-so-dead-after-all dead man.

Them crabs is good eatin’

What follows is a variety of palace intrigues as Hirosuke pretends to be Genzaburô, and finds himself embroiled in various romantic plots and schemes of his household. It’s quite a while before he makes the trip to his father’s island. Which all of this makes it feel like you’re watching at least three different movies woven together in a way that winds up making a logical story-sense by the end, but guarantees you never know what’s coming next.

Once Hirosuke reaches the island, Horrors of Malformed Men becomes a non-stop kaleidoscopic freakshow. Often it’s only make-up and movement that gives the island creatures their disturbing qualities. It’s more than enough to imbue the whole movie with an unsettling quality that’s hard to pin down. It’s the combination of the details that adds up and gets under one’s skin. At its core, it’s a mystery story, complete with the evil genius explaining his whole plan at the end, revealing who murdered whom, and so on, which clearly must have come from Rampo’s story (he was known for writing mysteries). But it’s what director Ishii does with this backbone that turns Horrors of Malformed Men into a must-see in the world of the bizarre and disturbing.