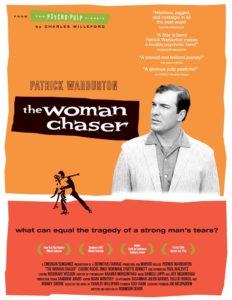 Turns out I’m one of only three—give or take—people who bothered to see The Woman Chaser when it opened in ’99. After killing it at Sundance, it was given an all too familiar botched release by the Landmark chain—they had no idea how to advertise it, didn’t screen it in many of their theaters, no one knew it existed, and that was that. It turned up on VHS, but never made it to DVD beyond one printing sold only at some lousy, long-forgotten video chain. Not only that, but failure to secure music rights meant all the perfectly chosen loungy jazz tunes were replaced with generic sound-alikes. And, finally, in making their distribution deal, Landmark asked that the most disturbing scene in the film be cut.

I went in ’99 because who would cast Patrick Warburton in a black and white neo-noir? They must have known something, I figured.

The Woman Chaser, as many have been coming to realize over the years since its release, is one of the best—and weirdest—neo-noirs ever made. Warburton, playing used car salesmen/genius filmmaker Richard Hudson, gives a performance he’s never topped; he’s never had the chance to. Characters like Hudson don’t come along often. I don’t know how first time writer/director Robinson Devor knew Warburton was his man, but then again I don’t know how he knew any of his insane choices would work. Yet they do. Devor made a masterpiece. 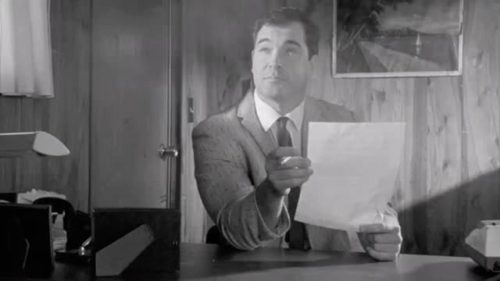 Big claims, I know! But it’s all true, I swear it. I have seen more noirs than you can shake a stick at, it’s a favorite genre of mine, and if there’s one thing I hate, it’s modern attempts at making jokey imitations. Dead Men Don’t Wear Plaid pulls it off, but with the help of actual scenes from old noirs and Steve Martin in his prime in the rest of it.

What typically happens with these kind of comic homages is this: A filmmaker loves noirs. Okay, great place to start. But one reason for their love is how funny parts of them play today, especially the gritty B movies, the ones not directed by Wilder and Kubrick and Welles. So those stone-faced men and dreamy femmes fatales with their hard-boiled dialogue are all goosed up and played for laughs, and what you end up with is a movie whose knowing winks come off as smug and condescending and far from funny. You pretty much end up watching a noir SNL sketch.

Same thing happens with jokey modern versions of ‘50s science fiction. Make the effects hilariously bad, the dialogue incredibly stupid, etc., etc. It’s a way of distancing oneself from the genre you claim to be paying homage to. It’s a way of saying you’re better than those filmmakers because you’re making your movie bad on purpose.

The Woman Chaser makes none of these mistakes. Every second of this movie is deadly serious. And every second is fucking hilarious. 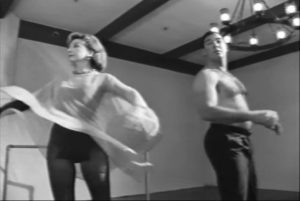 Take the dancing scene. Hudson, having had a life-changing epiphany, finds his mother at home practicing ballet. She asks him to dance with her. He agrees. He whips off his shirt, and in a lengthy sequence runs and leaps and twists with his dear old mother. That’s Patrick Warburton, shirt off, ballet dancing. Imagine it. It’s absurd. It’s hilarious. And yet—it’s as serious as the rest of the movie, because Warburton commits to it. More important still, the character he plays commits to it. It’s not a joke to Hudson, it’s not a joke to Warburton, and it’s not a joke to Devor. It’s funny as fuck, but it means something. It’s important. Hudson has to dance.

Why does he have to dance? Because The Woman Chaser is about one man’s existential crisis. Hudson realizes there’s more to life than money, that money is an empty pursuit, that for life to have any meaning, he’s got to create something, something perfect, something pure. His narration describing his newfound understanding of the meaning of life is delivered with utter sincerity.

Hudson is bigger than life. He’s a caricature. And he’s painfully real. Devor doesn’t mock him for a second. This is really a used car salesman and he’s really stumbled into what to him are deep philosophical waters. To Hudson, these are profoundly serious matters. None of it is a joke.

And that’s why it’s so funny. 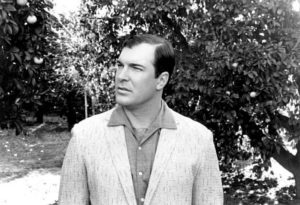 In search of his leading man.

Which still I’m failing to describe the way The Woman Chaser works. It knows it’s being funny. It knows it’s playing up the comedy. It knows it’s twisting around noir genre conventions for laughs. But it does so without mockery. It does it with love for noir, or bettter yet, with veneration for noir. How this is possible, how Devor pulls it off, I still can’t figure out. Examine the pieces of his puzzle and they feel as tired as every other attempt to imitate noir, but watch how he’s put them together, and a beautiful picture emerges. Let’s call it the magic of movie-making.

Ah, the magic of movie-making! Hudson, now knowing he must create, observes that painting, sculpture, writing a novel, and every other artistic pursuit take years of apprenticeship and work he has no time or talent for. “But,” he says, as so many have said before him, “I knew I could write and direct a movie.”

He calls his movie The Man Who Got Away. He lays out the story walking in a slow circle in his step-father’s study, and it’s gripping. Warburton speaks directly into the camera, telling us his grim, horrifying tale of a trucker who runs over a little girl, goes on the run, and is brutally killed by outraged bystanders.

Hudson ditches his car dealership, where all August long he’s been making his salesmen wear santa suits, and makes his movie. He finds his leading man working in the orange groves. He directs with passion and intensity, and knows exactly how to handle a lazy actress. He edits it down to perfection. Everyone who sees it agrees. It’s powerful. It’s devastating. It will make people angry. But it’s only 63 minutes long. Too short to be a movie, too long to be an hour of television. The studio head demands that changes be made. Hudson refuses. He will not reason. He will not compromise. His vision must remain pure. So of course he goes mad, 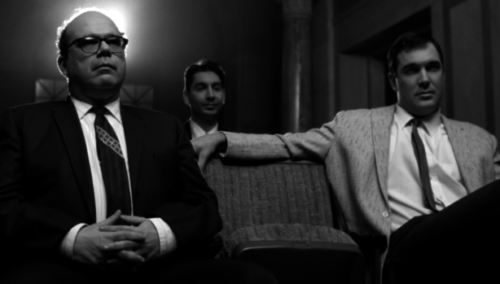 The black and white cinematography glitters and glows with a vibrancy rarely seen in modern black and white movies. Devor goes in for outrageous angles and close-ups, and once again makes them work when by all the laws of good taste they shouldn’t. He brings alive his ‘60s version of Los Angeles in a way I’ve never seen before, but in a way wholly consistent with the classic noir aesthetic.

The cast is full of amazing faces. No central casting here. There are no bad performances.

It’s based on a book by great noir writer Charles Willeford. Willeford really shines when he writes from the perspective of delusional, possibly psychotic characters mixed up in the art world, as in The Woman Chaser and a later great, The Burnt Orange Heresy. He’s been adapted to the screen before with Cockfighter and Miami Blues, the former directed by Monte Hellman from Willeford’s own script. It’s pretty good. I like Miami Blues even more. But I think the movie that best captures Willeford’s dark, twisted, hiliarious style is The Woman Chaser.

Hudson is no hero. This is noir. He is a dangerous man hell-bent on his own mad schemes. He mistreates everyone, including a secretary he impregnates and tosses aside like an old rag. When she comes to him, insisting he marry her, he punches her in the stomach. This is the scene Landmark had cut from the film. The movie is currently streaming where movies stream, but I haven’t watched it to see which version it is. I assume it’s the Landmark cut, but even if it is, it’s well worth watching.

Lucky for me, I’ve only ever seen The Woman Chaser on film, the last three times at the Roxie in San Francisco, where they’ve shown Devor’s original Sundance print, most recently last week. If I could demand Criterion release one movie on blu-ray, I’d choose The Woman Chaser. 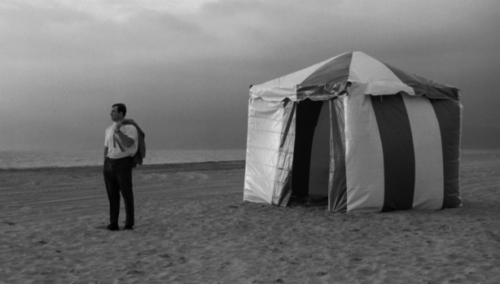 It’s out there, if you can find it…