Episode 3 of the new Twin Peaks may be the weirdest hour of television I’ve ever seen. And I’ve seen the Star Wars Christmas Special (ok, most of it, over multiple sittings, years apart). It plays more like a continuation of Eraserhead than of Twin Peaks, and it doesn’t even include Arm from episodes 1 and 2. Good ol’ Arm. I like that guy. The way he vibrates and his squishy talking brain. I hope we haven’t seen the last of him. 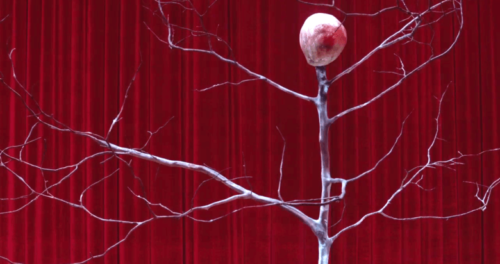 Episode 3 is for the most part concerned with Cooper returning from the Black Lodge. Broadly speaking. More specifically, it’s about Lynch reassuring us after the first two episodes that no, he really doesn’t give a damn what anyone wanted or expected or needed of Twin Peaks, he’s going to open up his skull and show us what’s inside, however inexpressibly odd. Is there something in particular you wanted? A character? A vibe? A story-line? A damn fine cup of coffee and a little gossip at the Double R? Sorry. David Lynch is not your bitch.

I’m having fun reading episode reviews of the show so far. Those poor, addled writers of TV recaps. They don’t know what to do with themselves. They expect TV to conform to the same bland rules they’ve learned to write the same bland recaps about. They want a mystery to solve, they want clues, they want a simple theme they can talk about ad nauseam. Lynch is confounding them at every turn. Whatever Twin Peaks is about, it’s not about to reveal it four hours into its eighteen hour run-time.

Story-wise, it’s not terribly complicated. Yet. The basics are, um, simple. Sure they are. Cooper has been stuck in the Black Lodge, i.e. the red-curtained, zig-zag floored room, for twenty-five years, and according to no less than Laura Palmer, he can go out now. When he does, Evil Cooper will return to the Lodge. Only problem is, Evil Cooper says he’s not playing along. 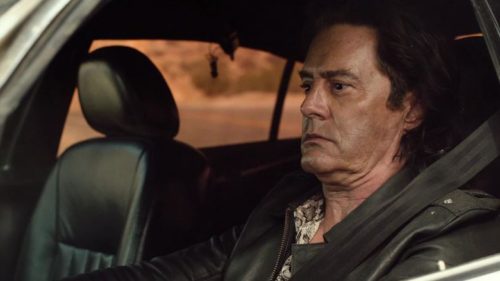 Instead, Dougie Cooper appears and winds up in the Black Lodge in Evil Cooper’s stead, only to turn into a small copper sphere. Like you do. One-armed Mike says Dougie was manufactured for this very purpose. So. Well-played, Evil Cooper.

Cooper returns to the real world, but he seems to be missing everything that made him him, although, possibly, his first drink of coffee brings him back. We won’t know for sure until episode 5. Evil Cooper is in jail, freaking out everyone with his improper thumbs-upping and poisonous barf (creamed corn? Aka garmonbozia? Anyone’s guess), and, says Mike, what with this whole Dougie issue complicating matters, either Cooper or Evil Cooper will now have to die.

We are deep in Lynch’s wheelhouse here. The man loves multiple identities, as Lost Highway, Mulholland Drive, Inland Empire, and the unproduced One Saliva Bubble have shown. What it all means for Cooper is as yet unknown. Anyone who says they know where this is going is too busy writing TV episode recaps to notice that what they’re watching does not conform to normal rules of episodic story-telling. 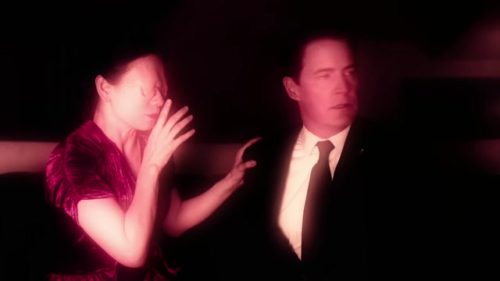 One of those days

Episode 3 begins with a sequence lasting close to twenty minutes so strange it belongs in a museum. Then again, it’s likely too strange for a museum crowd. With simple lighting and editing effects, Lynch brings us deep into uncut Eraserhead territory, but Eraserhead 40 years later. Cooper flies through space following his brief visit to the New York mystery cube and finds himself in something like a small, industrial living room in the middle of an ocean, where a blind, squeaking woman would rather he not travel by means of doorway number 15.

Same squeaking noises as the Giant played Cooper at the outset of Episode 1? I think maybe?

No matter. Blind lady brings Cooper upstairs and out into the starry night of deep space, throws a switch, and tumbles away into the infinite just before the giant head of Major Briggs floats by. “Blue Rose” he says by way of explanation.

Back in the room, Ronette Pulaski tells Cooper everything’s groovy, and he’s sucked into the machine in the wall, now numbered 3.

Of note, his room number at the Great Northern is 315. This is either important or not important. Trust me.

How lovely is the shot of black-smoke-Cooper creeping into the Las Vegas house through the wall socket? The shadow of the smoke-stick on the wall. The weird mound of Dougie-puke on the floor. Shoeless Cooper arriving in his perfect suit. There’s something terribly pleasing about it. 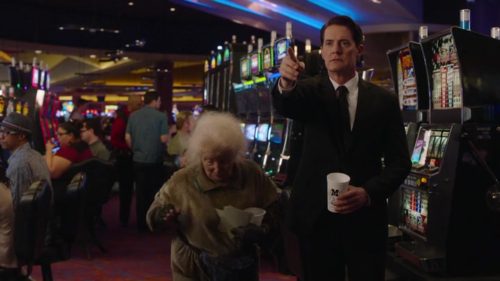 Mr. Jackpot. No normal human would allow this scene to last half as long as Lynch does. He plays it out so long the other half of it is in Episode 4. I wonder why no one but the weird witchy old lady asks him to point out a winner? Thirty in a row, you’d think somebody else would catch on.

Why is the Black Lodge showing Cooper the winners? The answer is either important or not important, I have no doubt.

Which is to say, like so many Lynchian moments, there is no “answer.” This is what the TV recappers are going to find themselves hard up against. Lynch doesn’t hand out answers. Lynch creates scenarios, and when he’s on, like now, those scenerios feel right. So of course Cooper is shown winners by ephemeral flames in which the red curtain and zig-zag floor appear. Not because of a reason we’re going to learn later, but because that’s just what happens in this situation. 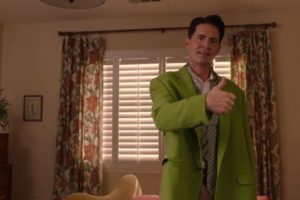 A couple of weeks ago I wrote about what a poke in the eye to TV viewer expectations Lynch’s Twin Peaks season 2 opener was back in ’90. Season 3 is on an entirely new level of weird. This is Lynch unbridled. I don’t know how much Mark Frost contributed to the story. Possibly a lot. So far it’s not the story that’s on another planet. It’s the way Lynch tells it. It’s no wonder the number of episodes kept increasing while Lynch edited this all together in the months before it aired. Spending an almost wordless twenty minutes in an industrial space-box is going to increase run-time. Even spending two solid minutes watching Dr. Jacoby paint shovels is outrageously long when compared to your standard shovel-painting scenes.

The pacing, too, is unheard of for television. These scenes couldn’t move more slowly. Yet every time an episode has ended I’ve thought, wait, what? It’s over so soon?

Lynch has always liked his actors to deliver lines at an unusually sedate pace, but he’s pushing it harder than ever before. The scenes with Hawk, Andy, and Lucy are like a test. One imagines Lynch daring each of his actors to see how long they can wait between lines. The bunny scene in particular. It’s so wrong it’s right but then, no, it’s wrong again, only it’s gone on so long you like it wrong now. 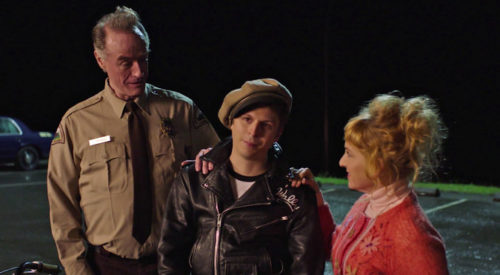 The Wild One stops by.

I don’t know what to make of Michael Cera’s Marlon Brando impression except to say I was laughing so hard I had to watch the episode again a day later just to make sure I didn’t dream it. Will he be returning in later episodes? He either will or he won’t, I’m thinking. Whichever it is, I’m happy.

I’m happy with this whole show so far. I have no clue what it all means, or what it’s going to mean, or what’s happening aside from Cooper making a slow return to our world, and I don’t care. Or rather I do care, I’m just fine not knowing until Lynch decides I’m ready. I’m more than happy to give Lynch my hand and let him lead me where he likes. I know he’s going to take me somewhere weird and spooky and I know he’s going to ask a hundred questions he’ll never answer, and that’s just the way I like it. 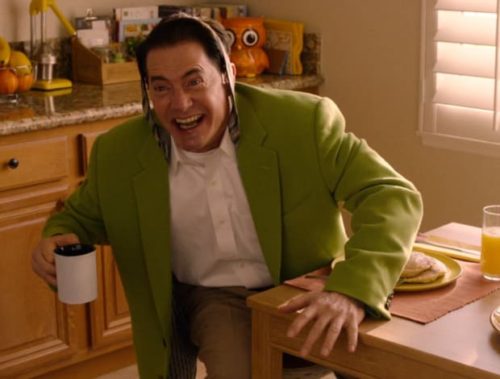 8 responses on “Twin Peaks Season 3: David Lynch Is Not Your Bitch”