The nose. So-called avenue to the soul, portal to the heart, byway to the brain, without which whither the rose, wherefore the waffles, what wonder the woods? Imagine a face sans sniffer—tis but a skull! Though oft second-fiddled to the eyes, we ignore the nose at our peril. Would that we could scent coming quakes and tornados, smell out evil intentions, olfactorate the electorate! But, alas, though schnozzes sit front and center on every face, rare is the genius proboscis.

Rare, but not unheard of. Or, rather, not unsmelled of. In this week’s Mind Control Double Feature, we dive deep into nasal cavities of unusual mystery and subtlety. What lies within is certain to open your eyeballs to the potential of your nostrils. 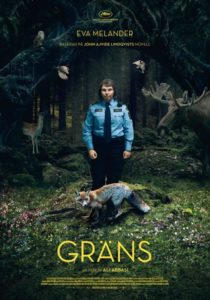 A small, strange Swedish film the less about which I reveal the better, winner of the Un Certain Regard at Cannes this year, Border has yet to open in the U.S., but when it does, you will need to both see and smell it in its entirety, as I was lucky enough to do at an early screening following which director Ali Abbasi and star Eva Melander spoke about its creation.

Eva Melander who, I did not at first realize, wore considerable makeup for her role as Tina, the best airport customs agent in the world. At first I thought, whoa, where did they find an actress with a face like this? Before thinking, hold on, there’s no way they found an actress with that face who’s this good an actress, that’s way too lucky. Or did they put out a casting call for oddest faces ever, and Melander turned up? Finally I said to myself, what are you, insane? That’s make-up, you dolt. Which it is.

But which goes to show the skill of the make-up artist and of the character’s conception. Tina’s face rests delicately on the edge of too grotesque to be real and mysterious but plausible glandular problem without going over it. According to Abbasi, to test their design, they sent Melander in her make-up out into the world pre-shooting to see what kind of reactions she got. Just as they hoped, people did the kind of double-takes they do when someone with a pronounced deformity walks by. They gape for a second, then quickly look away, so as not to rudely stare at this unfortunate—but certainly very real—soul.

Yet this plotline, while important later on, takes a backseat to more immediate concerns for Tina, namely the strange man who shows up at customs one day, Vore (Eero Milonoff). Vore’s face is weird in the exact same way as Tina’s. At which point she, and we too, realize there’s something more to this strange face and olfactory genius than we’d supposed. 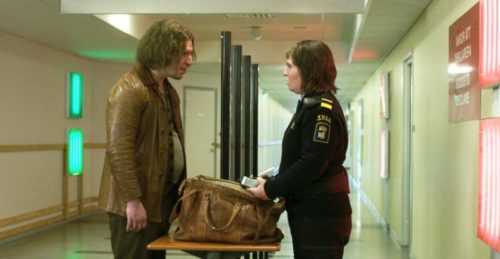 Soulmates at the airport

The film is then concerned with Vore slowly but surely revealing to Tina her true self, and how Tina, who thought she’d found her tiny corner of this world in which to feel safe, reacts.

It’s a carefully-paced, lovingly shot film with just enough weirdness to keep one enthralled—a slow, strange burn—but one that’s stayed with me since seeing it. 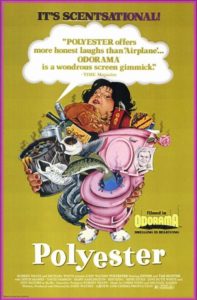 After sitting through a meditative, thoughtful, eerie Swedish sort-of-romance, you’re going to need something to wake you up. That something is John Waters’s first foray into what approaches, but is still comfortably far from, mainstream filmmaking, Polyester.

Another sort-of-romance, Polyster is the first and only movie to be filmed in Odorama, a technique described in a marvelously goofy prologue in a laboratory (which, I am led to understand, may not be included on home-viewing versions of the film? I caught it last week on 35mm, so I can’t be sure). Viewers, upon the film’s initial release, were given scratch-and-sniff Odorama cards, ten numbers on which corresponded to numbers that flashed on-screen during the film, indicating when to smell one’s card. Odors included pizza, model airplane glue, farts, roses, gasoline, and other olfactory pleasures. 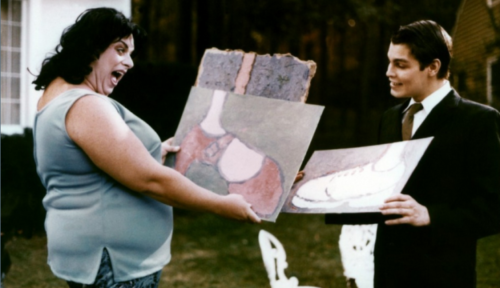 A mother and her foot-loving son

Odors play an important role in the film, and throughout, Francine shows off her unusually powerful sense of smell. Being a Jon Waters movie, the odors on display are not always the most delightful, but you won’t soon forget them.

Tab Hunter shows up in the latter half of the film as Divine’s dreamy love interest and potential savior, Todd Tomorrow, but Tomorrow has his own agenda, and in a movie where loveable pet dog Bonkers commits suicide by hanging, you can hardly expect everyone—or much of anyone, for that matter—to make it to the end alive. 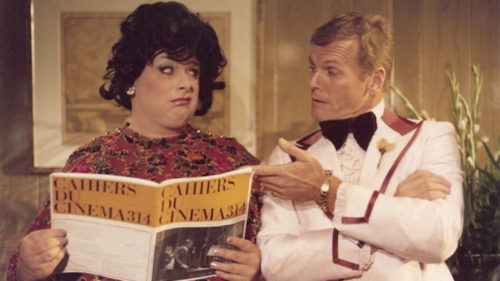 Polyester is exactly as ridiculous as you’d expect from Waters. As its sits between his early, purposefully shocking low-budget forays into outrageousness and his mainstream career directing Hairspray and so on, it hits something of a sweet spot for him. Mostly, it’s hilarious.

And the smells! Polyester is without question the smelliest movie ever made, while Border is the smellingest. Do your nose a favor and watch these two back to back as soon as such a thing is possible. 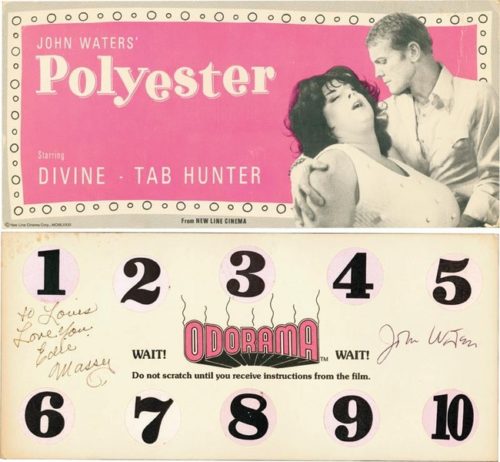 3 responses on “Mind Control Double Feature #111: Listen! Do You Smell Something?”