If you thought Hollywood could sink no lower into the filth in which it resides, you’ve got another think coming. Watch this preview for the so-called “children’s movie” Smurfs 2 and be shocked by the overt sexuality on display. The sheer perversity of marketing this kind of sexually explicit material to our kids should shame us all. But does it? No. Instead we laugh at the cat reaction shots, at  Neal Patrick Harris having sex with a unicorn, and so forth. Watch!

So Gargamel, here representing taboo sexual knowledge–he clings to a giant erect penis while shooting blue lightning (superpowerful semen) from the “wand” (penis) in his hand–creates the “naughties,” i.e. “naughty bits.” He creates a penis and a vagina! Hollywood, not satisfied until every child in the world has had their faces rubbed in vile sexual perversion, has outdone itself.

Note that the naughties are presented as funny and adorable goth kids. The naughty vagina has black hair, a sign in all Hollywood fare of the daring, fun, sexually awakened girl, always in contrast to the blonde heroine, she of a pure and virginal nature. Worse still, the black hair on the vagina is dyed with a blue streak, indicating here abdication of all socially responsible behavior. Seeing that blue streak, will any child doubt that this naughty has a tramp stamp and a labial piercing? The moment these foul sexual creatures are introduced, a thumping electronic rave-up song blares for the rest of the preview. Rave music is an indicator of drug use and its partner, lascivious, orgiastic sexual perversion. 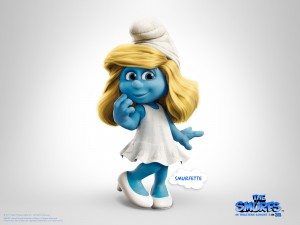 Note too the nature of the penis naughty: stupid and sputtering and all over the place. The penis has no brain, in other words. It will do the bidding of the vagina, its master. What does the vagina wish? To trick Smurfette into being as naughty as they are. What do we cut to the moment the vagina says this? We cut to Smurfette leaping onto a spoon and sending a splooging blob of chocolate semen onto the face of the chef. Smurfette is corrupted instantly. As the rest of the preview shows, she takes to being naughty with sickening gusto. “Isn’t this fun?!” she cries, shooting blue lightning from Gargamel’s “wand.” And all the while, the pulsating rave music thumps in the background.

Thankfully, this is as much as the preview reveals, for certainly, it is enough. I think it’s time we stood up against this kind of filth. I would like all readers, and their friends and family, to write emails to Sony Pictures, denouncing them for what they intend to attack our children with in ’13. Tweeterize about it! Update your facebooks with a call to arms! Together we can put a stop to this so-called “movie” ever seeing the light of day.