It is our present fate that every movie we once loved will soon be remade into something bland, unimaginative, and, in a tiny way we wouldn’t even notice save for the cumulative effect of remake after remake on our all too fragile psyches, soul-raping. And I know, these remakes vanish instantly, no one cares, the originals are still there, they’re still beloved. The remakes aren’t even worth discussing. Yet there they are. Staring at us with their big, stupid eyes. Begging for attention. Drooling on the carpet. 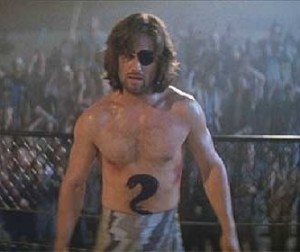 where’d he get that tattoo? i must know!

Next up? According to Ain’t It Cool News, Joel Silver is plotting a trilogy of movies about Snake Plissken, the one-eyed Kurt Russell bad-ass from John Carpenter’s Escape From New York (’81), and no, we’re not talking about the continued adventures of, we’re talking backstory, a trilogy of movies leading up to, one presumes, that time the President’s plane crashed into the prison that is Manhattan Island. Because as we’ve all spent years asking ourselves, how did Snake lose that eye? Why is he so bad-tempered? Where’d he get that crazy name? I mean just how the hell am I supposed to enjoy Escape From New York without knowing whether Snake’s uncle Ned touched him where he pees? 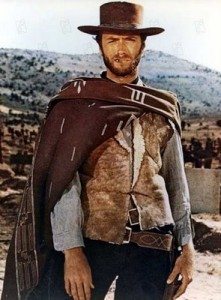 do you think he had a pet rabbit as a boy?

I wrote about the evils of backstory some months ago. I stand by it all. There is an obsession in Hollywood with turning character bios into entire movies. Here’s what I think is going on. Of course we wonder about Snake Plissken, or better yet the character that inspired Russell’s performance, Clint Eastwood‘s Man With No Name from Leone’s trilogy of A Fistful of Dollars, For A Few Dollars More, and The Good The Bad And The Ugly. The point is to wonder about them. Both characters are mysterious, bitter men with little to say and a generally nasty attitude. Both have seen things they’ll never forget, and won’t ever reveal. Both are fascinating because we can only guess at what made them the tough sons of bitches they are. 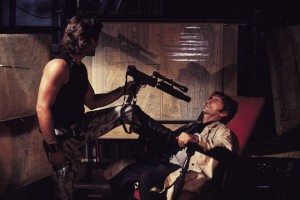 “Reveal my backstory, and I will shoot Harry Dean Stanton!”

If that’s not bad enough, I trust you’ve heard that aside from the official new Star Wars movies continuing Lucas’s saga, there will also be stand-alone movies set in the Star Wars universe? Oh yes. And prime among them? Han Solo’s backstory. You know, like how he met an attractive young Wookie by the name of Chewbacca and got into a bad situation with a slug named Jabba, back when he was merely a hovel. Beause if there’s any character whose shadowy background we’re desperate to see laid out by the Disney-approved numbers, it’s Han Solo’s.

Well, at least we can always just watch the original Star Wars movies and–oh, wait, that’s right. Lucas won’t release the originals, only the re-done ones from the ’90s. Sigh.