Back when I was knee-high to a grasshopper, my great-grandpappy sat me on his lap and said, “Boy, there’s a time gone come in life, when you just plain ain’t got the sense to know what the heck picture show you oughtta be puttin’ on. An’ when it up an’ happens to you, an’ by gum it will—git that dadgummed finger out yer nose, boy! Listen up!—when yer a needin’ an’ a hurtin’ an’ a yearnin’ fer them lights to dim but ya ain’t got one dang notion what to put on, why you just go on an’ watch yerselfs a couple of big damn bug movies, ya hear me? Bugs! Big ones! Now go on, git!” 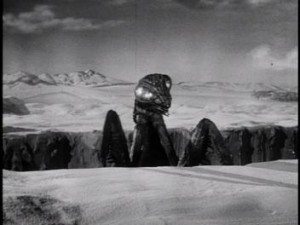 Why hello there. Mind if I eat your head?

I now pass the same advice on to you, dear readers, because there comes a time for all of us when that trippy independent mindfuck, that old black and white masterpiece, that trashy Nic Cage flick, that latest bullshit Oscar winner, and that animated freakshow requiring more weed than any mere human could smoke without serious long-term repercussions to fully comprehend, just isn’t going to cut if for our evening’s entertainment. We’ve seen it all before. We know how it ends. We want something different. Something old. Something weird. Something—dare I say it?—bad. Really, really bad. It is then, by which I mean now, that grandpappy’s advice must be heeded.

It’s time for some big bugs. We’ve gone partway down this road before, with the best known of all giant bug movies, Them!, in which big goddamn ants run rampant. But like any such work of genius, Them! inspired imitators—or, shall we say, shameless rip-offs—to follow in its footsteps, six feet at a time. For this week’s Mind Control Double Feature, we present two of those lesser known lights. Rest assured, once seen, neither is easily forgotten. 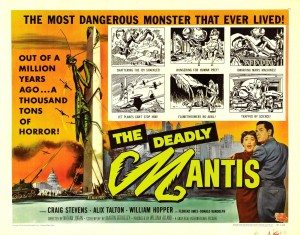 Not worried about the ice caps melting yet? You will be after watching The Deadly Mantis, in which a volcano erupting somewhere in the South Seas causes the icebergs at the North Pole to melt (don’t ask). Bad enough that soon we won’t have ice for our drinks, now we’ve got an ancient, defrosted, 200 foot long praying mantis come to life, killing Eskimos and headed south. You want to know what it looks like in flight? Enjoy: 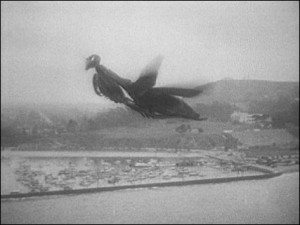 Army guys are sent to investigate. I seem to recall one of them getting scooped up and, presumably, eaten. In its wake the mantis leaves big mantis footprints and a four-foot-long-chunk of leg, or some such insectiod something or other. Whatever it is, it looks aburd, and that’s the important part here. Total absurdity. 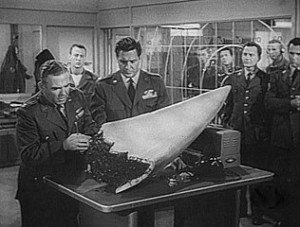 The army colonel guy gets a paleontologist guy to check out the bug chunk, who is himself checked out by a hot babe of a reporter, creating the classic giant-insect-movie troika of army/scientist/reporter, required not only for big bug movies but for all sci-fi of the era. Will a romance sprout between the scientist and the reporter? Let us hope.

Anyway—mantis on the loose! Only right, they don’t know that yet, not until it attacks, and the reporter, Marge, screams. Because without a woman screaming in terror, it’s not horror and/or science fiction, people (check out the trailer for the new Star Trek if you don’t believe me). And then off it goes, headed south to wreak destruction and drive bug repellent prices through the roof. 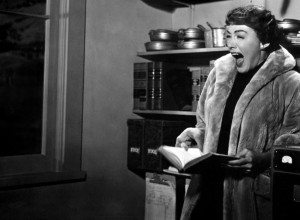 take it easy, now, it only wants a friend

The most visually memorable part of the movie is when the praying mantis makes it to Washington D.C. and clings to the Washington monument. It’s like the insect King Kong. After that it heads to New York and winds up in a tunnel, where it makes its last stand by telling hilarious jokes and trying to get a spot on The Tonight Show with Jack Paar.

Sure, I might have made that last part up. But you’ll never know until you watch The Deadly Mantis yourself. 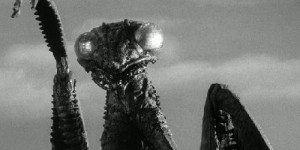 Of historical note, it was directed by Nathan Juran, who got his start as the art director on John Ford’s Oscar winning How Green Was My Valley. He later went on to direct such classics as 20 Million Miles to Earth, The 7th Voyage of Sinbad, Attack of The 50 Foot Woman, and First Men In The Moon. And yet we film nerds spend all our time yammering about Kubrick. It’s an unfair world, folks. 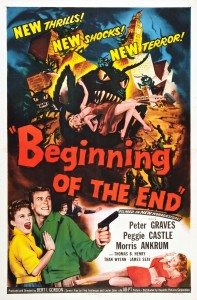 That’s right, ’57 was a good year for giant insects. Beginning of The End was also directed by a huge name in awful, one of the best ever, Bert I. Gordon, maker of such classics as The Amazing Colossal Man, Earth Vs. The Spider, Village of The Giants, The Food of The Gods, and the other best giant ant movie of all time, 1977’s Empire of The Ants, starring Joan Collins, which is responsible for you now welcoming your new insect overlords.

So you know you’re in good hands with Beginning of The End, which, speaking of being knee-high to a grasshopper, is about a swarm of giant locust, i.e. grasshoppers, to which we’re all knee-high. And how, you might ask, did such beasts come to be? It’s the same old story. A scientist, played by everyone’s favorite airline pilot and gladiator movie afficianado, Peter Graves, has been experimenting with radiation in his efforts to grow giant fruit and vegetables—you know, to end world hunger—and it seems something aside form the world’s starving millions took a bite. 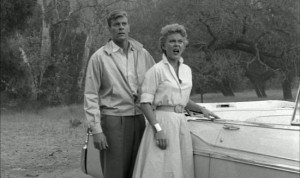 A feisty female reporter meets Graves when she comes to town to investigate reports of an entire town vanishing, all its inhabitants dead, all its crops gone. What could have wreaked such deadly havoc, she asks, checking out Graves’s giant fruit. Ahem. Well it couldn’t have anything to do with all of the giant, radioactive kumquats some bugs ate last week…could it? It’s not long before they put the pieces together. It’s locust! Big as busses! Hungry for human flesh! And they’re on their way to Chicago! 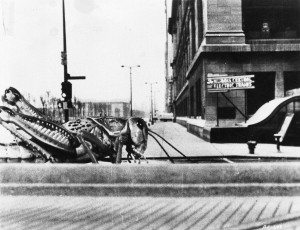 Enter the army guys, to complete the troika. They try machine guns and artillery, but it’s no use against so many big-ass bugs. The marauders make it to Chicago, crawl all over buildings and start gobbling people up. The army’s solution? Nuke ‘em. Hey, it worked with those pesky ants in Them!, why not grasshoppers? Sure,  they’d be taking out the entire city of Chicago, but what other choice is there? Peter Graves? Any ideas? 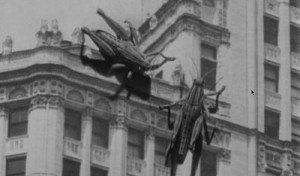 Of course he has an idea! In ‘50s science fiction, scientists are both the cause and solution to all of life’s problems. Sure, their godless experimenting might result in mutant bugs or giant humans or Godzilla or what have you, but it’s their quick-thinking genius that saves us, too. After all, these movies might be dumber than a bag of hammers, but they embody the hopes and fears of their era. 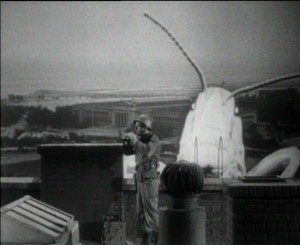 These movies may not be, shall we say, sublime cinematic masterpieces, but they will amuse you, if not stun you into a gaping stupor of total submission. Yes, MST3K did their jokey number on both of these, but skip that. Watch these bugs as god above intended: in the terrible silence of your own awe. Also, I recommend whiskey.