Let’s play a game. I’ll give you the name of a film, and whether or not you’ve seen it, or read the book it’s based on, or sat through the sequel, or caught the Broadway adaptation, or watched the trailer for its impending remake, you tell me pretty much every major plot point in the story from beginning to end. 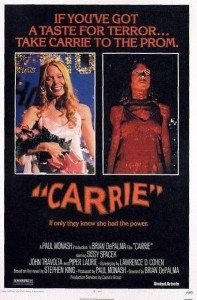 No. Seriously. Why is “Carrie” in quotes?

There’s a weird girl who gets her period for the first time at school. Her classmates mock her. She discovers she has telekinetic powers. She goes to the prom where she is doused with a bucket of delicious and nutritious pig’s blood. Then, oh, the humanity! The bloody mayhem caused by Carrie in her humiliation and rage.

Everyone knows that’s what happens in Carrie, regardless of which version we’re talking about. Don’t believe me? Well while not watch the new trailer for the upcoming Carrie movie remake and see for yourself.

It is a fact: You cannot condemn me for revealing plot points that are clearly depicted in the trailer. Ipso facto latin amen.

Surprise just isn’t in the cards for Carrie. It’s a story as old as the Odyssey, only slightly less old. This was Stephen King’s first book and his first book to be adapted into film. It’s a tale that’s been poured from the rafters for millennia — if you count this millennium and the last one, which I do.

I’ve always known what happened in Carrie and I never watched the film, or read the book, or eaten the cereal… until last night! That’s right! I just watched Brian DePalma’s 1976 cult-horror classic Carrie for the very first time!

I did it for you (and for Johnny). 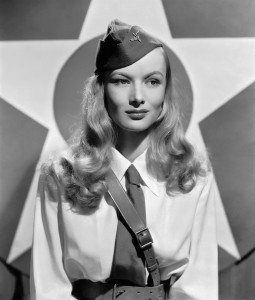 Why yes. I did just make up an excuse to insert a picture of Veronica Lake.

Why did it take me so long? It’s probably because I despise the films of Brian DePalma. The man is to Alfred Hitchcock what Bai Ling is to Veronica Lake. But, knowing that Carrie was being remade (again), I vowed to suck it up and watch the damn thing already.

How bad could it be? I mean, I knew everything that was going to happen anyway.

Well, I’ll tell you. Carrie was surprisingly enjoyable. There are many things about it with which I find fault, but even with absolutely no surprises in store, the film just magically works.

The first thing that you should know about Carrie is that like the Julie Brown video link you should clicked above, there is no way in hell this story is going to be produced exactly the same way today. The original film starts — I shit you not — with about a half dozen fully nude high school girls wandering about a locker room in slo-mo. That is the sort of thing that people today frown upon (along with high school shooting jokes and remakes of classic horror films). But yes. Lots of birthday-suited girls, including young ingenue Sissy Spacek, fresh off Terrance Malick’s Badlands.

Carrie easily marks Spacek’s most impressive performance, excepting her turn as Anne Uumellmahaye in The Man with Two Brains.

This, ladies, is why you should always wear gloves in the shower.

Why is she so good? Well, it’s not because of the nudity, you perv. Rather, it’s because she’s totally excellent in an off-kilter Mia Farrow Rosemary’s Baby way. Just creep out to the nines good, being completely believable as the socially awkward Carrie.

Piper Laurie, playing Carrie’s Jesus freak momma, is also crazy, good, and crazy-good. Their scenes together rend the obviously phony scrim that backdrops this film in order to show you something that feels undeniably real. They are the rope that ties this parade balloon to the earth. Both were nominated for Academy Awards for their work here. (Piper Laurie, of course, you’ll recognize from her role in The Hustler and for her part on Twin Peaks.) 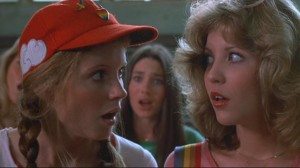 These two are just the start of the frankly incredible cast that populates this picture, though. Everywhere you look, there’s a naked schoolgirl and a recognizable face — sometimes even at the same time! Amy Irving, famous for sucking the life out of Steven Spielberg and occasionally acting, is the sympathetic Sue Snell. Teen heartthrob William Katt’s curly mug held center stage in the only decent television show from the 1980s to have avoided a reboot this year: The Greatest American Hero. John Travolta plays a dumb shit (perfectly). He was in Staying Alive and Look Who’s Talking Now, if you haven’t heard of him. Alpha bitch Chris is brought to life by the perky Nancy Allen who went on to survive Robocop. P.J. Soles you’ll recognize from Stripes and Halloween, even if she wears her red baseball cap for the entire film, including during the prom. 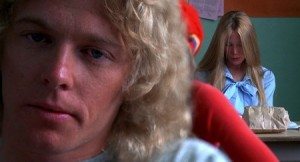 Believe it or not, I’m walking on air.

I’m not done, either. I just needed to take a breath.

Sydney Lassick plays English teacher Mr. Fromm and if you don’t remember him from One Flew Over the Cuckoo’s Nest you should watch that film again twice. Finally, but certainly not leastly: Edie McClurg. That’s right. Edie McClurg. You’ll recognize her when you see her if you’re a righteous dude.

Beyond the cast, Carrie is like a slow-motion train jumping the rails and crashing into a Hall & Oates video. One must ignore DePalma’s showy but vapid trick shots and the bludgeoning score of flute music, synth pop, and rip-offs of Bernard Hermann’s iconic music from Psycho. Also try to look beyond some seriously questionable wardrobe choices and an utter and complete lack of subtlety.

Seriously. You want to watch a naked Sissy Spacek massage her inner thighs in the high school shower? That’s in the first three minutes.

The shower scene I always wanted to shoot in slow-motion. I wanted to get involved in this lyrical eroticism before the blood comes, and it’s all wonderful, beautiful . . . the steam, Carrie’s touching herself . . . and then WHAM! As soon as you cut from slow-motion to regular motion you’re already in a jolt, because you’re so used to the time sense.

So why do I like Carrie? It’s honestly hard to say. It is a film that is much more than the sum of its parts. It’s so off-kilter, with awkward comedy and fumbling romance and all the drama turned up to 11 — which, now that I say it, is exactly as high school should be. Yes, the film is all elbows but at its heart, it’s truly yearning to grow up into something beautiful and adored. That’s Carrie. Striving for acceptance and grace but humiliated anyway. Watching the film, you feel Carrie White’s confusion and pain. You believe in it. That’s more than can be said for most films in this genre. 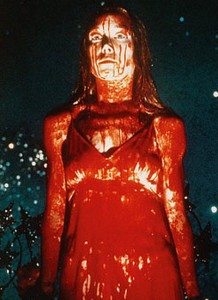 I never saw this coming

As to the film’s themes, there’s something half-coagulated about woman’s emerging sexuality, the power of flowing blood, self-denial, and the uncontrollable nature of vengeance. Basically, it’s about Jesus turning into a hot mess of a high school girl and going postal. DePalma slathers on some obvious religious symbolism and adds a couple of giant call-outs to Hitchcock, but doesn’t really ever connect the dots in a coherent way. Don’t worry. You can make your own meaning or forget about it, as you see fit.

Carrie is available on Netflix streaming now, and you can bet it won’t be closer to October when the Chloë Grace Moretz version heads to theaters. Stream it now while you can.

As to the impending remake, I’m not sure what to say. From the trailer, it’s clear that they’ve gone with the bog-standard “modern horror remake” look: all gloss, flash cutting, and lots of portentousness. There is absolutely nothing left out of the trailer, including the destruction of the town stuff from the novel, which they found the budget for this time around and which might possibly have been a surprise but… no.

Since the poster for DePalma’s version had Carrie dressed as prom queen and covered in blood, I guess they just decided to forget about trying to keep anything mysterious this time out as well. 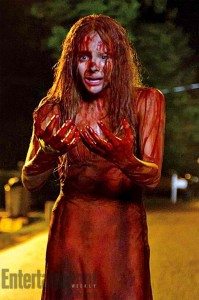 Like I said: surprise is not Carrie‘s strong suit. It doesn’t matter. No one goes to see Carrie because they don’t know what to expect. They go because they know what to expect, because there is something about the ür-tale that connects with us. The symbolism of blood and sexual awakening and cracking faith speaks to our experiences, even if the story is truly fantastic. It is a warning and a plea: do not push the door to adulthood open too wide. Here there be dragons.

What new insight will the remake team bring to this material? I’m going to go out on a limb and say, “probably nothing.” I’m sure Moretz will be fine, but I doubt she’ll hit the heights of Spacek’s hysteria. Same with Julianne Moore as the mother. They, and everyone else, seem too pretty and too well assembled to be believed.

I don’t see these images and recall reality. Frankly, I’d be shocked if the remake didn’t feel generic. And as wonky as DePalma’s version is, it’s not generic.

2 responses on “Keep Calm and Carrie On”