Great news, everyone, the kind of news that keeps us going in these hard times, the kind that gets our juices flowing, the kind that promises that Jesus himself will rise from the dead or descend from Heaven or do whatever it is that Jesus is supposed to do next when he hears about it—there’s going to be a remake of Sam Peckinpah’s ’69 western masterpiece, The Wild Bunch, and it’s going to star Will Smith. Yes!

a still from the set of the new Wild Bunch. or thereabouts.

Glory be to the movie gods! Just think about it for a moment: Peckinpah’s bleak, violent, twisted commentary on westerns, on friendship, on the dawning of the modern age and the struggle against it, on violence both real and cinematic, in the soft, supple hands of family-film favorite Will Smith. Which role will he play? Surely it’ll be the leader of the bunch, played by William Holden in the original with the kind of world-weary sadness never once evinced by Smith even in his most imaginative dreams of movie stardom. 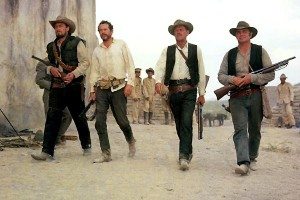 And thank the heavenly heavens for that! Who wants bleakness in this day and age? We don’t want anti-heroes machine gunning Mexicans like ants boiling out of a nest. We want super heroes! We want Iron Man! And Superman! And still other men! And we don’t want the old west, heck no! We want a modern-day take on the story, and that’s what Smith will, like the cinematic Santa that he is, give to us, all wrapped up pretty with at worst a PG-13 rating.

Borgnine!!! Get out of here! This post has nothing to do with you!

The story will be set in the present day. Smith and his if not wild then at least rather peppy bunch will face down a cartel of mean Mexican drug lords in what is sure to be the kind of remake that bears no resemblence to its forbear save the name, and for that we can all be thankful. If Smith can’t make Peckinpah safe for the whole family, nobody can. 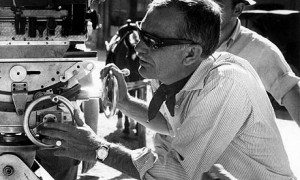 Even more exciting are Smith’s next plans. Once The Wild Bunch wraps, he’ll be starring in Baz Luhrmann’s next film, a dazzling, musical remake of The Deer Hunter sure to be a blast in 3D, and following that, J.J. Abrams’s long-rumored reboot of Spielberg’s 1941—2241! Set during the Jupiterean Wars! Go get ’em, Will! I can’t wait!

One response on “Will Smith To Star In Remake of The Wild Bunch! Hooray!”