Glorious showbiz. The lights, the parties, the stars! Gosh, but it’s all so magical, ain’t it? You bet it is. What are you waiting for? You’re gonna fly to Los Angeles—no, wait—to New York City! That’s the ticket! You’re off to New York to make it big. Why, you’ll be just as famous as—as—as Joe Buck! He was famous, right? Sure he was! Everything worked out great for that guy. It’s not like showbiz is corrupt and wicked and sleazy, full of backstabbing, amoral, wanna-be Napoleons who’d walk over their own grandmother’s corpse—or better yet, your grandmother’s corpse—to get even one lousy inch ahead of the next guy, which next guy is you. Heck no! 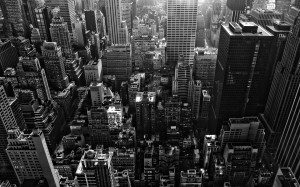 the big city! hoo-boy! i’m a gonna be famous!

Still and all, it ain’t as easy as all that. You’re gonna struggle. You’re gonna take some crummy jobs, sure you are, who doesn’t? It’s all part of the process. Maybe it’ll take a year. Maybe a few years. As long as you’re working. As long as you’re doing something—anything—that brings you anywhere near the big time, right? Everyone else is making it. You help them, they help you, and when they make it first, okay, you’re forgotten in a second, nobody remembers what you did for them, but so what? They’ll get what’s coming to them, those heartless bastards, those ungrateful sons of bitches!

Thing is, you’re not angry. You’re not bitter. Sure, you’re getting old. You’re going nowhere. But so what? There’s still time. You’re still somebody, goddammit! You’re not worthless! You’re not garbage! You won’t do just anything for a buck! Because why, have you got a buck? Will it mean I’ve got a shot? What do I have to do?

In this week’s Mind Control Double Feature, we find out just what it takes to make it when you’re scrabbling around the edges of fame in New York City. And it ain’t necessarily pretty. 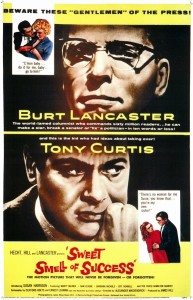 It’s about bottom-feeding press agent Sidney Falco (Tony Curtis, playing against type as a sleazebag with the morals of a gnat), desperate to get his clients mentioned in the nationally syndicated, massively influential newspaper column of J.J. Hunsecker (Burt Lancaster in one of his best performances this side of Elmer Gantry).

Problem is, Falco promised Hunsecker to break up the relationship between Hunsecker’s sister, Susan, and a—gasp!—jazz guitarist, Steve Dallas (not to be confused with the character from the Bloom County comic strip), who Hunsecker doesn’t approve of. I mean he’s a jazz guitarist, for crying out loud. And Falco has failed to break them up. Hunsecker finally gets Falco to plant a story with a different columnist suggesting that Dallas is a dope-smoking Commie. Nice. 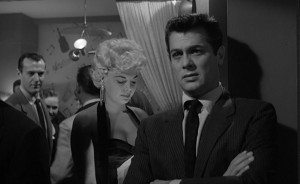 And still it doesn’t work! So now Hunsecker wants Falco to plant dope on Dallas and tip off the cops. Falco is so pathetic and desperate that he agrees.

After that, things start to get sleazy. 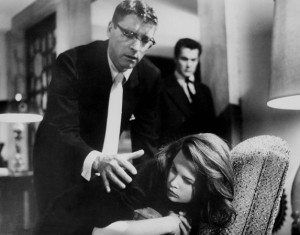 Hunsecker comforting his sister the only way he knows how–creepily

This is a film noir of the highest order, the story of one man’s downward spiral, fueled by greed and lust. It’s directed by Alexander Mackendrick, best known for his Ealing comedies starring Alec Guinness, The Man In The White Suit and The Ladykillers (which is a lovely double feature in itself, folks). He only made a few movies after coming to the U.S. when Ealing went under, and Sweet Smell of Success is the best. It’s shot by James Wong Howe (Seconds, and many, many others) in beautiful black and white, full of dark shadows and striking lights. NYC throbs with lights and people, most of them seedy and depraved.

It’s based on a story written by the soon-to-be screenwriting great Ernest Lehman (The King And I, North By Northwest, West Side Story, Who’s Afraid of Virginia Woolf?, etc.), and scripted by Lehman and playwright Clifford Odets, who spent months reworking the story, and was literally re-writing scenes hours before they were shot. 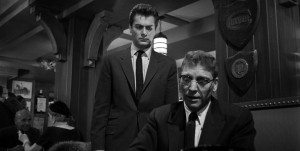 the two worst people you will ever meet on film

The results are fantastic. The dialogue is so sharp and cutting you’ll want to have plenty of band-aids handy. “Cat’s in the bag, and the bag’s in the river.” “I’d hate to take a bite out of you. You’re a cookie full of arsenic.” “Maybe I left my sense of humor in my other suit.” “Mr. Hunsecker, you’ve got more twists than a barrel of pretzels.”

Sweet Smell of Success was so evil and unpleasant that nobody actually liked it when it came out. They expected Tony Curtis to be his usual charming, loveable self. Instead they got Sidney Falco, one of the most sickeningly morals-free leeches ever put on film. It tanked at the box office. Yet critics liked it. And since ’57 it has continued to grow in stature, deservedly so. It’s a brilliant piece of work.

Also, you will need plenty of whiskey when it’s over, and a shower to wash off the slime. Once you’re clean, and you’ve freshened your drink, it’s time to put on the second feature, this one of a much more comedic nature: 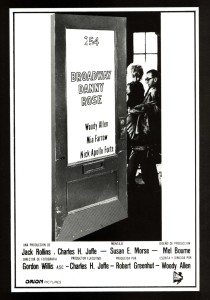 Woody Allen was riding high in the late ‘70s and early ‘80s, making great movies left and right. You couldn’t throw a rock at a movie screen in that era and not hit a great Woody Allen movie (also of note, turns out theater owners don’t like it when you throw rocks at their screens). Broadway Danny Rose is, as I wrote not too terribly long ago, one of the 10 best Woody Allen movies, though it’s one of the more overlooked ones. Perhaps because it’s shot in black & white? Audiences are rather fickle that way.

Also, no superheros blowing up buildings.

But there is a superhero in the movie! And that superhero is New York talent agent Danny Rose, renowned for finding acts shortly before they go on to stardom, or some approximation thereof, leaving Danny Rose behind, all his help forgotten. 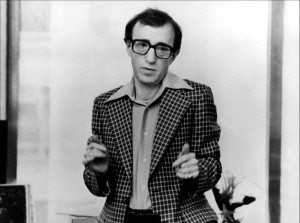 The story is told in flashback by a group of comedians at a deli, as they reminisce about the great and hilariously awful Danny Rose and his many misadventures.

The main thrust of the story involves the time Danny was asked by singer Lou Canova (Nick Apollo Forte, playing a role Allen initially offered to—wait for it—Sylvester Stallone (one of whose very first movie appearances, you may be interested to know, was in Allen’s Bananas)), a washed up singer suddenly having a career resurgence, to be the “beard” for the trollop he’s seeing on the side, Tina (Mia Farrow playing far, far against type), so she can come to the show without Lou’s wife knowing who she is.

Problem is, Tina’s ex is some kind of mobster, the jealous angry type, who, believing Danny is Tina’s new beau, puts a hit out on him. 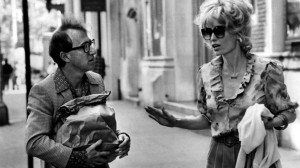 Unlike the depraved Sidney Falco, Danny Rose is a stand-up guy. I mean he’s a great guy, not a comic. He’s good to his clients. He cares. Even when they abandon him.

Allen is in top form here, and so is Farrow, playing a sort of Italian tramp with big hair who wears enormous sunglasses all the time. 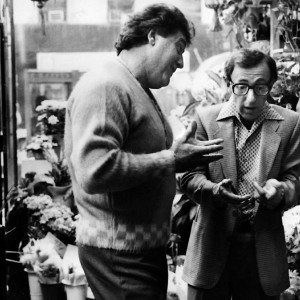 Danny and his star client

This is one of a handful of Allen movies shot by the great cinematographer Gordon Willis (along with Annie Hall, Manhattan, Stardust Memories, and others), famous for his bleak ‘70s style shown off in The Godfather I & II, The Parallax View, and All The President’s Men. It looks beautiful, and like Manhattan, shows off New York the way Allen liked it best: in black & white.

Like Sweet Smell of Success, Broadway Danny Rose is packed with fantastic dialogue, though not the nasty, biting kind. It is, after all, a comedic tale related by a group of comedians.

Danny is full of great lines, such as: “If you take my advice, you’ll become one of the great balloon-folding acts of all time! Really, ’cause I don’t just see you folding balloons in joints. You listen to me, you’re gonna fold balloons at universities and colleges!” and, “I don’t wanna badmouth the kid, but he’s a horrible, dishonest, immoral louse. And I say that with all due respect.” 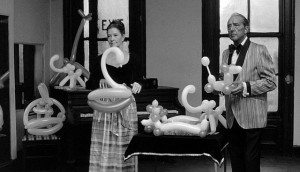 you guys is gonna be stars!

It’s a tough life, trying to make it as a star in New York. You might crumble under the pressure like Sidney Falco, or you might stay true to yourself like Danny Rose. In either case, it’s a crazy world, people. You have been warned.