And so we find ourselves in the cold, dark days of January. The nights are long, the trees are bare, the skies—well, all right, it’s sunny at the moment, but yesterday!— bleak and cold! Grey skies, drizzling rain, biting wind! It’s that time of year when you find yourself quietly lurking in a cob-webbed corner of your dark little abode, power drill in hand, its bit pressed to your temple, hopeful that this time—yes, finally!—that this time you will successfully free the demons from their cage inside your skull. I mean, I’m not the only one who does that. Right?

For this I blame Ghostbusters, and the immortal exchange:

Spengler: This is big, Peter, this is very big. There is definitely something here.

Venkman: Egon, this reminds me of the time you tried to drill a hole through your head. Remember that?

Spengler: That would’ve worked if you hadn’t stopped me.

In this cold, dark time of year, it’s time to watch a cold, dark double bill, each of which includes heads and power tools, that we may answer the age-old question: would it have worked if Venkman hadn’t stopped him? 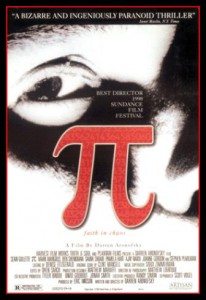 Darren Aronofsky, of late known for two well-received films, Black Swan (’10) and The Wrestler (’08), made his feature debut with Pi. It’s his best movie. Some would point to his second feature as his best, Requiem For A Dream (’00), but I find Requiem to be essentially the same movie as Pi, sort of a stylistically identical remake with more money and in color, with the main difference that Pi is all about mathematics, religion, and insanity–not typical subjects for movies–while Requiem is about drug abuse, an all too typical subject.

Pi was shot on the cheap. Aronofsky made the wise choice to use that cheapness to his advantage. He used high contrast black & white film, creating a look that heightens the dramatic, scary atmosphere by playing off dark shadows and blinding white lights. The grainy look of the film is itself ominous in the context of the story.

The story is of a math genius, Max, whose computer program, meant to predict the stock market, suffers a glitch and blows up, but not before spitting out a 216 digit number which, it turns out, may be the true name of God as predicted in the Torah. At least according to those who read the Torah as a coded mathematical message direct from God. 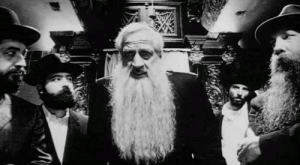 Max is soon beset by creepy Wall Street agents and even creepier Hasidic Jewish mystics, all of whom want that number. He refuses to give it up.

Max suffers from headaches of ever-growing intensity. The more he delves into this number, the worse the headaches become. Something bulges under his temple. Is he going mad? Maybe the answer is the power drill. Maybe that will help… 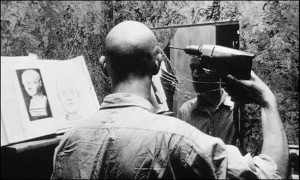 this is definitely going to work out fine

Pi is one weird little movie. I’m sure you will enjoy it. If you’ve seen it before, it’s worth watching again. Especially because of how it leads into our second feature, a film unknown to many. Indeed, it is exactly the thing one wants after Pi: 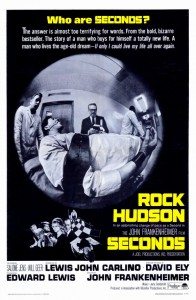 Director John Frankenheimer was on a roll when he made Seconds. His two prior films were both paranoid political thrillers, The Manchurian Candidate (’62) and Seven Days In May (’64), and both were hits. Seconds is likewise extremely creepy and paranoid, but takes place in the personal realm, not the political. As much as I love The Manchurian Candidate, Seconds is my favorite Frankenheimer movie. It plays like the most disturbing 100 minute Twilight Zone episode never made.

Like Pi, Seconds is concerned with one man’s psyche. This man, Arthur, receives a mysterious call from a friend he thought dead. This friend seems to be offering Arthur—well, what, exactly? A way out? Arthur, a middle-aged man with a wife he has nothing in common with and a grown daughter he never sees, is not a happy man. He has everything our consumerist society tells us we’re supposed to want, but something’s missing. Something big. 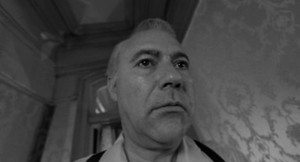 Arthur finds himself at the Company. He is offered a new life. A new identity. A way to start again. A second chance. Arthur becomes Tony (Rock Hudson). From there, things get very peculiar indeed. 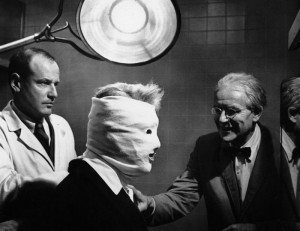 Also like Pi, Seconds is shot in black & white, but not the cheap kind. The look of this movie is gorgeously mind-bending. It’s entirely psychedelic, is what it is, which maybe sounds odd without loud, swirling colors to freak you out with. It’s shot by James Wong Howe, a legend of cinematography, veteran of over 100 movies (including one of my favorites, Sweet Smell of Success). He uses all kinds of effects to heighten the weirdness and, essentially, to really disturb the fuck out of you. The opening sequence alone, a POV trip through a busy train station, is like nothing you’ve ever seen before. It’s just kind of—wrong.

And then there’s a sequence where a group of free-lovin’ hippies has a grape-stomping, naked bacchanal that is so weird you’ll be thanking me for weeks afterwards. 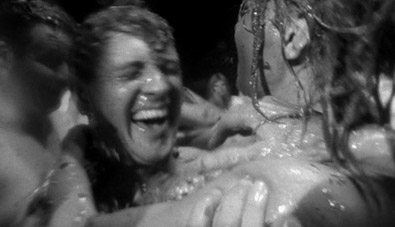 Above all, Seconds is highly unsettling. The opening credits sequence, by the famed Saul Bass, features stretched out eyes and mouths and faces. It sets the mood.

I’m not surprised that Seconds wasn’t the hit Frankenheimer’s previous movies were. But since its release, it has rightly gained a following. There aren’t many movies to compare it to. It’s that odd. 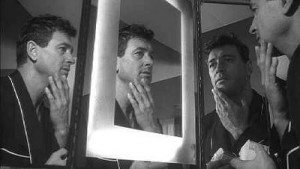 Now, about the theme of this double feature, power tools and heads: Seconds fits right in. You’ll have to see how yourself.