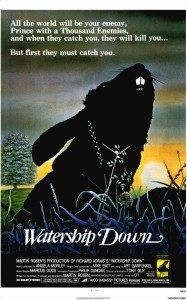 Why not watch Watership Down, I thought? I hadn’t seen it since I was a wee little kid, and I recalled it being weird and dark and very unusual for an animated film. It was made in ’78, a great era for dark, powerful, sometimes criminally overlooked movies. It features the voice-acting of John Hurt, Ralph Richardson, Denholm Elliot, and Zero Mostel, among many other notable Brits. How could it be bad? It couldn’t. It’s going to be a lost gem. I can’t wait!

A voice nagged at me, then, from deep in the murky depths of my mind: did you like it as a kid? asked the voice. I don’t remember liking it. But you saw it around 5th or 6th grade, didn’t you? Yeah. So? So your favorite movie was An American Werewolf In London. You don’t think you’d favorably recall a strange and bleak animated movie? I would if it was good. Yes. Yes you would. I see your point, nagging voice inside my head.

Still, I could have been wrong. I was 11. What did I know when I was 11? Aside from fully comprehending the genius that is An American Werewolf In London? Not much. Watership Down, here I come! 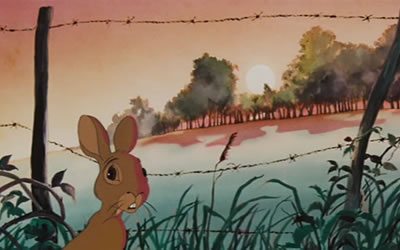 Oh god, the blood! The blood!

Bad call. Watership Down is, in almost every way, awful. Much worse than my 11 year-old self recalled. Thanks, kid! Thanks for warning me! And nagging voice aside, I couldn’t wait to watch it again. I really wanted to love it.

It begins well. The beginning is the best part. With beautifully simplified, stylized animation, the mythology of the rabbits, as invented by Richard Adams in the novel, is shown, with the sun god Frith punishing the rabbits’ overexuberant reproducing by gifting every other animal with teeth and claws and an insatiable desire to kill rabbits. To the rabbits he gives the gift of speed, that they may outrun their foes. 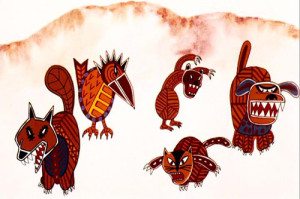 Then the movie starts. The character animation is a bit lazy. With the exception of a few main characters, all the rabbits blend together. The backgrounds, all watercolors, work, but all told I can’t say the animation grabbed me. With one exception (one aside from the intro): the Black Rabbit of Inlé, represented as a flying black shadow. It’s the one image I recall from childhood. It’s perfectly ominous and mystical as it leaps through the sky, fading in and out.

But forget the animation. That’s not the problem. The problem is that writer/director/producer Martin Rosen managed with a precision beyond impressive to gut Adams’s brilliant adventure story of all drama and excitement, leaving behind nothing but an unaffecting, confusing outline. It’s ghastly. 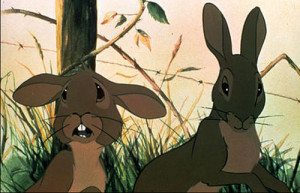 Fiver and Hazel, deeply worried about the script

The book is mauled. How else to put it? The major sequences are touched on, but that’s it. It’s like the goal was to remind the audience of scenes in the book without actually bothering to do anything with them.

I admit to be being a big fan of filmmakers who take vast liberties with source material, but I’m a fan of it with one purpose in mind: the purpose of making a great film. In this case, the movie is a dramatic disaster. It’s 90 minutes long and feels like four hours. Four hours in which nothing at all happens. 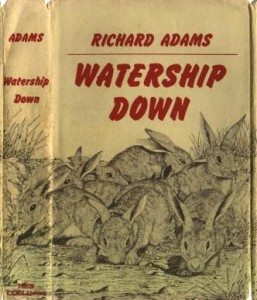 read the book and rejoice

Have you read Watership Down? It’s pretty much the best adventure story ever written. I read it once or twice as a kid, then re-read it in my 30s, just to see if it held up. Hold up? Fuck you, hold up. It fucking kills. The story, the characters, the mythology, the writing—holy hraka!—the writing is lovely and precise and I’m telling you, as the title of this piece makes clear, forget movies for a moment—I know it’s hard, believe me, I know—but go ahead and take a long enough break to re-read (or read? For Frith’s sake, if you’ve never read it at all, you must!) Watership Down, because you will love it and you will be happy and what more do you want out of life? You want a cookie? Fine. Here’s a cookie.*

Where was I? Look, I could pretty much listen to John Hurt read the phone book and not get bored, but man, this movie, it killed me. Where was the passion? The excitement? The characters? All gone, neatly excised, and in their place? Fuck if I know. 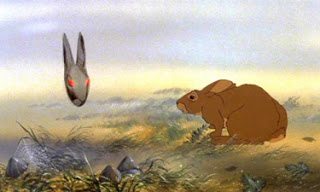 The Black Rabbit of Inle comes for Hazel

Sure, it’s dark and scary. I’d say it’s just dark and scary enough for kids, but then I was a weird kid who liked being scared. Alas, the scary moments are few and far between. Meantime, we get Zero Mostel doing the weirdest Russian accent I’ve ever heard as the bird, Kehaar, who in the movie is as confusing a character as the rabbits. Most of whom, by the way, are cut out for the movie. You want female rabbits? Sorry. Not enough time for them.

The interwebs tell me that the movie was popular, and remains reasonably beloved, which stands as yet more proof, as if any was needed, that the internet is full of lies. Lies and crazy people. Run away!

Run to your local book emporium and get your hands on Richard Adams’s novel. It’s been a decade since I re-read it. I’m thinking the time to check it out again is fast approaching.

Watership Down could–should–make a great movie. Maybe someone will get around to that. Because they haven’t yet. 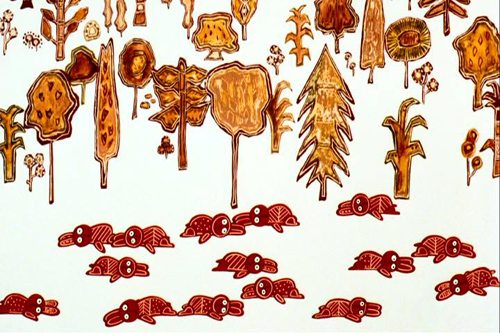 All dead! All dead!

9 responses on “Don’t Watch Watership Down; Read It”