One expects Breaking Bad to be intense. But has any scene in the show’s history been as nail-biting as the final showdown between Hand and Walt and Todd’s Uncle Jack and his henchmen? I chewed my fingernails so short I chewed off my fingers. I’m typing this with sticks taped to my forehead. The lead-up to this scene is so intense I thought the episode was over when Walt realized it was Hank driving up. How could they ratchet it up any higher? They found a way.

Hank is dead. For starters. I’ve never heard a more obvious goodbye speech than his call to Marie. Though the moment she picked up I muttered, “He’s dead,” then watched the final scene with my heart in my throat knowing Hank was about to die. Of course he didn’t, but he will. How does this play out any other way? Unless Walt manages to convince everyone to stop shooting. Then what? Uncle Jack takes two cops hostage? Maybe. But unlikely. I think Hank and Gomez are dead. It’s Jesse who Walt is going to save, once again.

And now that I’m predicting the future, I think eventually it’s Jesse who’s conscripted at gunpoint to cook, and it’s Jesse who Walt is on his way to rescue with the machine gun in his trunk.

Where do Skyler and Junior go? Saul’s guy sets them up with new identities, and Walt never sees them again. 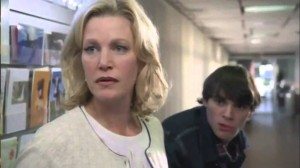 There’s still a chance for you two, but it’s mighty slim

Enough speculatin’! How about that episode? Walt is undone, finally. And by what? Greed. Hank nails it; Walt doesn’t bother to really look at that photo of his money barrel. When he fears for his money, nothing else matters. On the phone with Jesse, he talks about all kinds of horrible things he’s done, surely recorded by Hank. He’s caught, fair and square. He’s beat and he knows it. Beaten by greed, and by telling himself that the one thing Jesse would never do is rat. When he tells Todd and Uncle Jack why it is he wants Jesse dead, he says emphatically, “He’s not a rat.”

“Coward!” says Walt to Jesse, after handcuffs have clicked into place. Walt’s outraged at Jesse for not being an honest liar/murderer, like Walt. Jesse broke the rules of the game! Which there’s only rule to this game: do anything to survive, but never go to the cops. 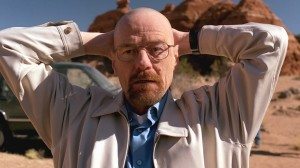 Walt gives himself up

So Walt turns himself in. Good for you, Walt, to accept defeat without killing absolutely everybody. Only whoops, too bad you called in the psychos and gave them the GPS coordinates. Of where your money is buried. Now you are going to get everyone killed, Walt! You bonehead. You evil, murderous bonehead.

I feel badly for Huell. How long’s he going to be stuck in a safehouse? Poor guy, he didn’t want to see Jesse dead.

This episode is a series of plans all failing to go off as envisioned. Jesse tries to find out where Walt’s money is from Huell, but Huell’s info suggests only that the money is buried. They find the rental truck, but there’s no GPS on it to tell them where Walt drove to. So they concoct a way to trick Walt into leading them there.

Meanwhile, Walt tries to use Andrea and Brock to lure Jesse into a set-up, but it’s Hank who’s got Jesse’s phone, so that’s a bust (another creepy moment of Walt in the same room with Brock, who seems at the very least to understand that Walt is evil, though he says nothing). When Walt realizes he’s been had, but still only thinks Jesse is coming for him, he calls in Uncle Jack, only to call him off at the last second. Which likewise fails. Uncle Jack is understandably concerned about Walt, his new cook. He shows up anyway.

To pay for Jesse’s hit, Uncle Jack wants Walt to cook again, to teach Todd how to achieve better purity and, crucially, how to make it blue. In the opening scene, Todd manages only a 76% cook, and it’s not blue. Their customers want it blue, says Lydia. It has to be blue. Todd, ever the loyal puppy, makes tea for Lydia and tells her how much he wants to make her happy and get it right. Yes, Todd’s got a thing for Lydia. After she leaves, he stares longingly at the lipstick smudge she left on her mug. Maybe he’ll put her in a jar with holes in the lid like he did Drew Sharp’s tarantula. 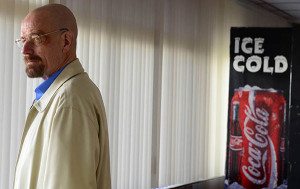 Saul once again brings a little levity into the episode. He shows up at the carwash, where Junior is starstruck, having never before met the famous TV lawyer. Outside, Saul and Walt talk with one of Saul’s billboards in the background. Saul can’t find Huell and thinks Jesse killed him. This strikes Walt as unlikely, but whatever’s happened, things are unravelling for everyone, and they know it.

Turns out Walt buried his money at the spot where he and Jesse first cooked meth. A nice way to bring things full circle. It’s a spot called To’hajiilee, giving the episode its name. Walt’s caught at the site of his first crime. It’s a rare thing to see Walt tricked, but for once someone gets the better of him. The episode is all about Hank making moves in the chess match, finally cornering Walt. Problem for Hank is that Walt cheats, so to speak. Like Jesse said last week, when it comes to Walt, no matter what you think is going to happen, the exact opposite thing is actually going to happen.

As Uncle Jack and his men face off with Hank and Gomez, Walt yells at them from inside the SUV to call it off. He’s got some small shred of decency left. He doesn’t want to see Hank killed. With the show ending mid-gunfight, it’s possible Walt will stop the shooting before anyone gets shot, but then what? How he can save everyone? How can he talk his way out? Uncle Jack doesn’t seem like a guy who does nuance. For once–or, perhaps, for the first time–Walt’s going to witness a family member dying because of his actions.

For the first time, we get the sense that the show is truly wrapping up. Walt thinks the game is up. He’s beat. But as we’ve seen again and again in Breaking Bad, the gears Walt has set in motion spin whether he wants them to or not. Simply giving himself up isn’t going to work. Walt will be the cause of much suffering yet to come. This is where everything falls apart.