I hate to start this double feature write-up on a down note, but the thing is, you’re going to die. Not anytime soon, heavens no! You’re going to live a good long life. Well. A good life, anyway. Good enough. You’ll live as long as you live, let’s agree on that, and when your time is up, when death comes knocking on your door or sawing down your tree or whupping your ass at chess or Battleship or Clue, however he comes, when he does, I hereby advise you go out dancing. You could cry, you could argue, you could beg for more time, you could hold tight the door frame yelling “How do you stop it?!”, but you can’t stop Death. So. Might as well put your dancing shoes on and enjoy yourself. 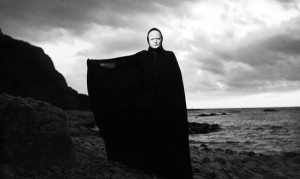 You might also be advised not to dwell on your ultimate end while still alive. Surely there are better ways to spend your time, and no matter the depth of your dwelling, well, see above. On the other hand, maybe there’s nothing more important to consider. Maybe this whole dying business is what’s going to put living in its best perspective. Maybe, by plumbing the limitless depths of death’s many philosophical conundra, you will experience life more fully than any who came before you.

Or maybe you’ll just turn into a depressing jerk nobody wants to hang out with.

The thing is, this death business? It brings up some questions. If you’re a religious sort, you might direct your questions to that god chap. And once asked, you might get a little miffed at his neverending silence on the matter, and on every other matter besides.

If you’re not a religious sort, you might go the philosophical route. You might ponder the merits of existentialism and conclude that the world is absurd and without meaning. This might depress you.

In the end, or, rather, before the end, maybe you should cut out the pondering and complaining and just bloody well do something. Something meaningful. Something good. Like saving someone’s life. Or assassinating Napoleon. For example. After that? Have fun dancing!

In this week’s Mind Control Double Feature, we take Death by the hand, and let the dark one lead.

The Seventh Seal begins with one of the most iconic scenes in the history of movies: Max von Sydow as Antonius Block, a knight just returned to a Sweden ravaged by the black death after fighting in the Crusades, playing chess with Death on a rocky beach. 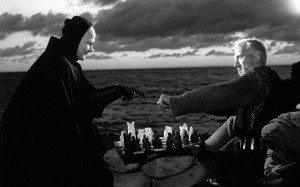 It’s Block who, faced with Death come to take him away, suggests playing. Death agrees. Should Block win, Death will come another time. If Block loses, his time is up. Block says there’s something he wants to do with the time allowed by the game, but he won’t say what it is. 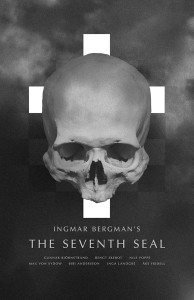 Swedish writer/director Ingmar Bergman had been making movies since the mid-‘40s (as well as writing and directing plays), but it wasn’t until The Seventh Seal (and later the same year Wild Strawberries) that he came to international attention, and fame. He would go on to make a string of thoughtfully bleak movies throughout the ‘60s, many dealing with themes similar to those in The Seventh Seal, primarily: death, and the mystery of god’s silence.

Block and his squire, Jöns (Gunnar Björnstrand), ride through the countryside on their way to Block’s castle to find Sweden hit by the plague. Self-flagellants parade through villages to the horror and wonder of the residents, and witches are burned alive. 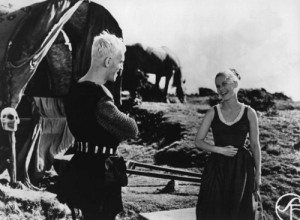 They come across a group of actors, Jof and Mia (and their baby) and Skat, who dons a skeletal mask of death for their performances. The actors join Block and Jöns, who promise to take them safely through the forest to their castle, that they may avoid the black death.

In a church, Block confesses to who he thinks is a priest, lamenting the silence of god and meaninglessness of life. He says he’s playing a game of chess with Death, and that he’ll win. The priest asks how. Block reveals his strategy, and the priest reveals himself to be Death.

What? Death’s a lying cheat? Damn it all! Who can you trust?

More characters join our heroes as they make their way through the woods. Life and god and the meaning of it all are discussed. The actor Jof sometimes has visions of people no one else can see. So while everyone else sees Block playing chess by himself, Jof alone sees Block’s opponent. Jof thinks maybe hooking up with the knight and his squire wasn’t the best idea after all.

As you might have guessed, a movie that begins with a chess game against Death isn’t going to end well. Not for everyone, at least. Who lives and who dies? Wait and see.

The movie’s end likewise features one of the most iconic scenes in the history of film: a number of characters are seen in the distance, hand in hand with each other and with Death, leading them, dancing, up a hill beneath dark clouds. 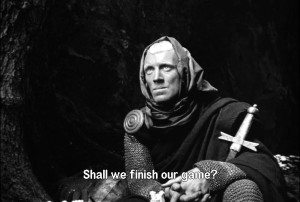 Don’t do it, Max! He switched the pieces when you weren’t looking!

The Seventh Seal isn’t my favorite Bergman movie. I like some of his ‘60s films best. But after recently watching The Seventh Seal for the first time in years, I was reminded of just how good it is. It’s simple, yet goes deep. As with so many of Bergman’s films, it’s shot gorgeously. The black & white images shimmer and glow. And as always, his cast is as strong as can be, led by a young Max von Sydow, whose face, though it appears chiseled from smooth stone, is filled with pain and yearning. It’s not a historical film–dates of the Crusades, the black death, etc. are not at all consistent with reality–it’s a kind of fantasia. The kind with death at the end.

How do you follow up something like that? With more death! But, you know, the funny kind. 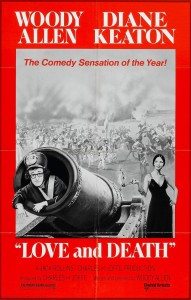 The last of Woody Allen’s pure comedies, where every scene is wall to wall jokes, where every line is either set-up or pay-off, and certainly one of the best movies he ever made. It marks the end of the first period of Allen’s career as a filmmaker, and though it subtly pointed the way to the future, at the time no one had any idea he’d become the filmmaker he became. He certainly wasn’t on anyone’s “great directors” list in ’75. He was a talented movie-maker, but a maker of silly comedies.

Love And Death changed that, wacky though it is. It’s set in Russia during the Napoleonic wars, with jokes relating to Dostoevsky and Tolstoy, existentialist philosophy, and various films and filmmakers, including Eistenstein and Allen’s favorite, Ingmar Bergman. So we get references to the Odessa steps sequence in The Battleship Potemkin, to Bergman’s framing of shots in Persona, and to The Seventh Seal‘s dance with Death. Keeping with the setting, the score consists of pieces by Prokofiev. 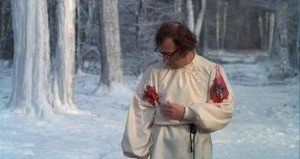 All that aside, the movie is wonderfully goofy. Allen plays Boris, a meek pacifist in a family of big, strapping, Russian men. He’s sent to war regardless. Luckily, he inadvertantly becomes a hero, and thanks to the death of the herring merchant married to his true love, Sonja (Diane Keaton), he’s able to marry her. 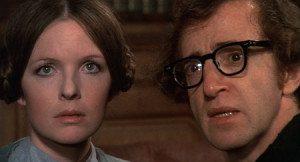 Things are looking up for the couple when Napoleon invades Russia. To prevent his screwing up her plans to start a family, Sonja comes up with a plan: assassinate Napoleon! What could go wrong? Of course her plan requires endless philosophical debate, her favorite past-time. Boris is no match. Off they go to Moscow. 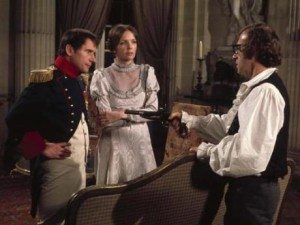 the master assassin shows himself

Things do not go as planned. Needless to say, someone gets to dance with Death at the end of the film.

Allen has fun throwing in endless anachronistic jokes, like the black drill sergeant chewing him out, cheerleaders on the sidelines of battles, and Allen’s ever-present black-framed eyeglasses.

Two years later, Allen made Annie Hall, set in then-present-day New York, featuring an endless parade of cinematic tricks and ideas, great characters, and still packed with jokes. It was his first romantic comedy. He’s made a few others since then.

No one knew Love and Death marked the death of the old Woody Allen, the goofball only interested in telling silly jokes, and the birth of Allen the Film Director. But that’s exactly what it did. I advise watching it after The Seventh Seal, and before you die.

One response on “Mind Control Double Feature #59: Dancing With Death”