Later, as he sat on the balcony eating the dog, Doctor Robert Laing reflected on the unusual events that had taken place within this huge apartment building during the previous three months. 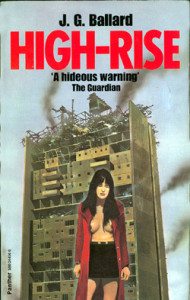 So begins J.G. Ballard’s novel High Rise. Written in ’75, it takes place entirely within an ultra-modern apartment complex, where the residents, feeling the technological emptiness and malaise permeating all of Ballard’s work, rather quickly revert to a primitive state. The residents form tribes based on floor number, with the poorer residents at the bottom and the rich at the top, as the mechanized world of the high rise–along with the rules governing society–break down. Ghastly acts are committed by everyone.

In other words, perfect for a movie! It’s like Lord of The Flies with adults, and you know what that means: plenty of sexual perversion.

Plus this is Ballard we’re talking about, who famously, in his novel Crash, found some very creepy, fetishized connections between sex and cars and car wrecks and parking garages and airports and apartment complexes. I’ve read quite a bit of Ballard, and Crash wasn’t my cup of tea. Nor was Cronenberg’s movie version, though if anyone was going to make a movie out of that one, it was Cronenberg, who shares with Ballard a certain cold, clinical, mechanical take on the sexual (see Dead Ringers for Cronenberg’s best exploration of such). 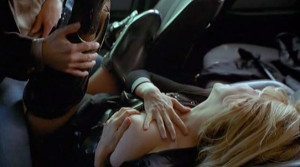 from Cronenberg’s Crash, if you’re into that sort of thing

Ballard explored some of the ideas he’d later double down on with Crash in an earlier book, The Atrocity Exhibition, which I enjoyed a lot more. If you’ve got an interest in reading about the strangely empty yet bizarrely sexualized fantasies engendered by modern structures and machines and the deaths of movie stars, I suggest starting there.

As for High Rise, though it certainly touches on Ballard’s interest in the effects of modernity on the human psyche’s basic drives, it’s also a version of a post-apocalyptic story, of which Ballard wrote a few, including The Drought and The Drowned World, two very strange books about the end of the world, one wet and one dry.

Ben Wheatley is a relatively new director who’s made some very intriguing, very weird movies, inlcuding Kill List, a story of a hit-man lured into a sort of evil cabal of killers with a very demented and abrupt ending, and Sightseers, a comedy about two murderous road-trippers on holiday in the English countryside that’s wonderfully demented and fun (I wrote about it here). He also made A Field In England, which has yet to open in the States. I can’t wait to check it out. Take a look at the trailer here. 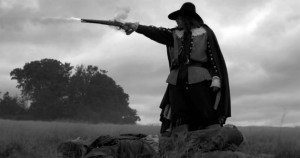 A Field In England, as you can plainly see

As reported by ScreenDaily, High Rise has long been waiting for the right director to come along. Although other scripts had been written for it, Wheatley will be shooting from a new adaptation penned by Kill List and A Field In England writer Amy Jump. Which bodes well. These are not normal movies, and High Rise isn’t a normal book.

So now’s the time to check out Wheatley’s other work, and, if you’re the sort of ancient luddite who still reads books, to check out some Ballard.