I’m the Supreme Being, not a historian, and am therefore unqualified to say why there is no figure more revered in the annals of United States history than the con artist. Which is exactly why I’m just the man for the job. 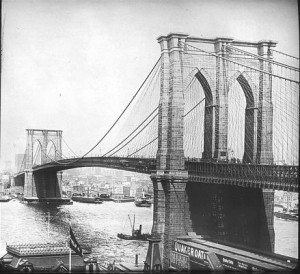 What, this bridge? Hundred bucks and it’s yours.

Americans have a deep and abiding distrust of anyone with genuine knowledge of anything. All learning is suspect. All but for the ability to feign knowledge. This is the lone skill Americans consider worth studying. Americans much prefer a bullshitter. Talk a good talk, and by gum, we’ll listen. You’ve got land to sell in the Everglades? A bridge to sell in Brooklyn? A pea to find beneath a cup? A foolproof scam to win big betting on the ponies? Sign us up!

It all has something bafflingly twisted to do with the American Dream, which in its originally nebulous and improbable conception had to do with “hard work” and “making something of yourself” no matter your backwoods upbringing or lack of material wealth, but which has long since come to mean “fast moneys, anywhichway you can git ‘em!” The quicker and slicker your method, the better. And if your plan involves screwing over a bunch of saps in the process? Better still! For what is “American exceptionalism” but the belief that we’re better than you, and by you I mean everyone but me, so hands up, fucker, and gimme all yer cash!

It is said that everyone in the United States is created equal, that we have no classes, no castes.

But we are renowned liars. Indeed we do have classess: classes of crooks. From the lowliest pickpocket to the CEO of the richest financial insitution, each makes his living stealing money from his fellow citizens. Yet neither is worthy of our respect.

We respect the con artist. For at his best, he fleeces his mark without the mark ever knowing, or better yet, with the mark believing his loss of money is, given the unfortunate circumstances engineered by the con artist, a lucky break indeed.

A great con is not only a work of art, it rises to the level of magic. To steal someone’s money and have them thank you for it…that is the American Dream.

In this week’s Mind Control Double Feature, we watch the con artist at work. 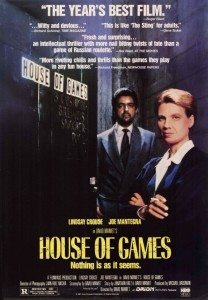 David Mamet’s first and best movie as writer/director. It tells the very tightly plotted story of Margaret Ford (Lindsay Crouse), psychologist and best-selling author, and her attraction to con artist Mike (Joe Mantegna) after he tries to pull an elaborate con on her. She doesn’t fall for it because she’s smart; she spots the gaff. She offers to follow Mike around, learn his ways, and write a book about him. He’s flattered, and eventually convinced. Complications ensue.

The problem with writing up a movie about con artists is that to say damn near anything is to give away the game. A good con movie leads you to believe one thing is happening, when in fact it’s something else all together. And a really good con movie knows you know it’s trying to fool you, such that the something-else-all-together you spotted–you clever kid, you!–is the very thing the movie expects you to spot, while it’s busy playing another, much deeper game. 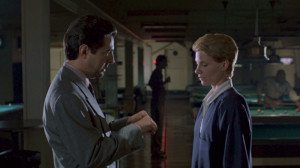 In House of Games, Mamet’s up to something very particular, and he pulls it off beautifully. Mantegna, a regular cast-member in Mamet’s plays in the ‘80s, gets the rhythms of Mamet’s stylized dialogue better than anyone. He’s a perfect Mamet bastard. Because that’s who Mamet writes best: smart tough guys who think they know everything. Sometimes they do. Other times, not so much. 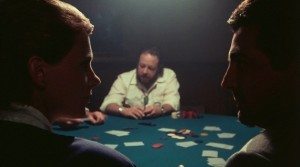 Dr. Ford is in her way as cold and logical and tough as any of the men in the movie, meaning she’s an unusually strong female character for a Mamet piece, or else, to look at it less generously, she’s one of his typical male characters written as a woman. Either way, in House of Games, her character works. She goes after what she wants. After all, her best-selling book is titled Driven: Compulsion and Obsession in Everyday Life. 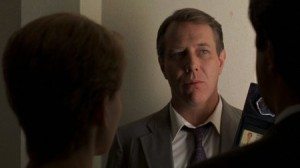 Mamet’s style of directing is simple and straightforward. He understands how a simple series of shots tells a story. There’s nothing flashy in here, no wild camera angles, no fancy camera moves, no dreamy art direction, nothing that isn’t clear and to the point. He even wrote a book about how to direct movies, On Directing Film, where he details his logical manner of creating a film. And while in following his guidelines one could never be a Lynch or a Herzog or a Coppola, for the kind of what let’s call literate, character driven stories Mamet writes, his method is smart and effective.

House of Games is a sneaky little movie. I’d better not say anything else. 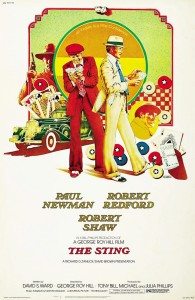 It is possible you have heard of The Sting. It collected a boatload of Oscars, including Best Picture, Best Director, and Best Original Screenplay. Lucky for The Sting, The Godfather came out in ’72 and The Godfather Part II in ’74. Look what happened to Chinatown, also released in ’74—no Best Picture Oscar. That’s right. Chinatown isn’t a Best Picture and Argo is. Sad times we live in. So very, very sad.

But I digress. As is my wont.

The Sting! You have seen it? I don’t care. Time to see it again, especially after enjoying the shenanigans in House of Games. The Sting takes us back to the ‘30s, when con artistry was one of the only ways an honest guy could make a buck. 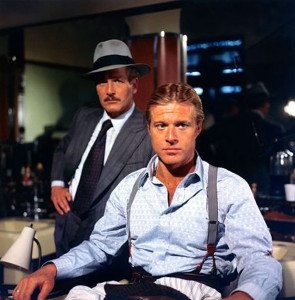 Just look at those charming bastards! They could talk the spots off a leopard.

Robert Redford and Paul Newman, after teaming up so successfully a few years prior in Butch Cassidy And The Sundance Kid (wait, how did that end?), join forces once again, this time to take down crime boss Doyle Lonnegan (Robert Shaw, in one of his best non-shark-hunting roles), in Depression era Chicago, all to the strains of Scott Joplin’s ragtime classics, which classics actually went out of style in the ‘20s, but who are we to argue? Marvin Hamlisch’s orchestrations of Joplin’s tunes are the backbone of the movie. The soundtrack album is one of my favorites, and back in ’73 was a huge hit, spawning a newfound love for Joplin’s rags.

Redford plays Johnny Hooker, a small-time con artist who mistakenly pisses off Lonnegan. Newman is the older, wiser con artist, in hiding from the FBI, who agrees to stage a complex con with Hooker to take down Lonnegan. Complications ensue. 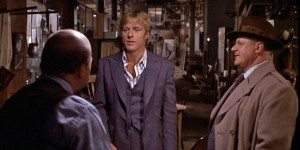 One again, it’s best not to go into the plot, or one runs the risks of giving away the game. David S. Ward, who wrote the original script, created a very tight piece of work, with all kinds of misdirection built in. You always think you know exactly what’s happening, only to learn you didn’t, or you did, but decided not to believe yourself. Any way you play it, Ward and director George Roy Hill have at least ten or twelve aces up their sleeves. It’s best to sit back and go along for the ride. 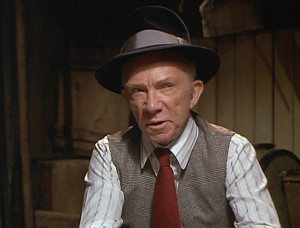 Ray Walston too? You can’t go wrong with Mr. Hand in your movie.

Hill also directed Butch Cassidy, and though The Sting isn’t William Goldman funny, it’s got a lot of humor, despite being, at heart, a serious story. It’s shot with loving care by Robert Surtees, of The Last Picture Show and The Graduate fame, among others. It’s a classic of ‘70s cinema, though unlike so many ‘70s classics, it’s not dark, plotless, and depressing. Three qualities I particularly like in my ‘70s cinema. That The Sting can eschew all of that grit and still be awesome is a testament to how much fun it is. Shot almost entirely on studio backlots, they’re not going for a realistic ’30s look. They’re going for a look that hearkens back to old movies. 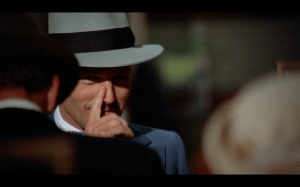 The Sting features plenty of nose touching, for you nose fetishists out there

What, you think I’m lying to you? You think these movies aren’t good enough to watch? Well. Could be. Tell you what, give the money you would have spent on renting them to me, just to hold, I’ll get you copies of the movies, and if you don’t like them, I’ll give you the money back. I’ll wait for you right here. Deal?