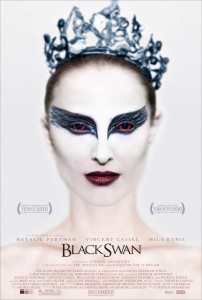 There are two stunning things about Darren Aronofsky’s 2010 award winner Black Swan. The first is Natalie Portman’s sinewy and strung performance. The second is that people went to see it.

Black Swan is—and I don’t want to be the herald of bad tidings, but it’s true—a horror film.

That’s the most interesting thing about the movie.

Mirror, mirror on the wall, who’s the prettiest of them all? 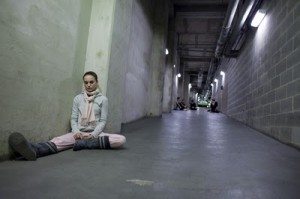 The loneliness of success

From its start to its finish, Black Swan dances a standard horror plot, albeit with some interesting style, fantastic performances, and enough class to carry through. It is as scary (or tense) as most horror films. It is equally disturbing, and bloody, and — in the end — as corny.

My wife hadn’t thought to call Black Swan a horror film because she grew up when films like I Know What You Did Last Summer and Scream were big in theaters, and she never wanted to see any of those. Horror films, to her thinking, were about monstrous types who jumped out of the closet to cut teenagers up with sharp implements.

Sure. Those are horror films. 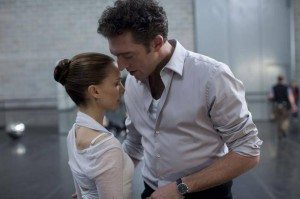 I would like to put baby in a corner

In the film, a slight, girlish, repressed ballerina, Nina, (Natalie Portman) gets cast in a high-pressure role. Trying to allow the buried side of her personality to emerge, she struggles with her oppressive mother (Barbara Hershey), her sexually manipulative director (Vincent Cassel), and her jealous peers (Mila Kunis, Winona Ryder). Mostly, however, she struggles with herself, losing her grasp of reality as her real or imagined doppelgänger lurks and strikes. 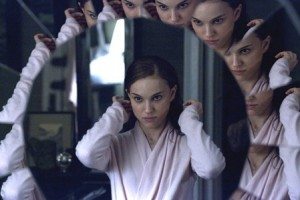 Did I ever tell you about the Candyman?

It is a film of mirrors, of illusions, and of transformations. Like many horror films, we follow the beset protagonist. We watch her and see what she sees, or thinks she sees.

Aronofsky does a sly job of substituting Mila Kunis for Natalie Portman, so both woman appear at times indistinguishable despite their lack of physical similarity. There’s plenty of sex, lascivious and cruel. And then there’s the ballet, where Nina tries to dance as both white and black swan queens. Or her face does, digitally transposed on actual ballerinas. Will she overcome? Does perfection lurk within her, or only unhealing wounds?

If you’ve seen a number of horror films — or psychological thrillers, excuse me — than you’ll quickly see where the film is headed. It won’t surprise you when corpses turn out to be illusory or when Portman’s swanning becomes all too literal. Like too many horror films, alas, by the time the monster appears it is a disappointment. You giggle with relief instead of sweating in fear. As sweetly as Aronofsky builds tension and fosters confusion, he goes a bit Phantom of the Opera on us in the end. 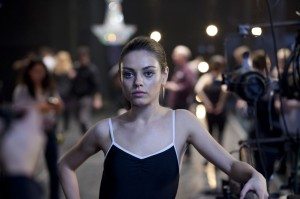 Mila Kunis lost 20 pounds to play a ballerina. She started out at 117. And they say it’s not a horror film.

What becomes of Nina is not nearly as terrifying as what she does to herself, before she goes batty. Her imagined torture of ripped skin and sprouting feathers pale beside her everyday suffering of bulimia, coerced infantilization, and emotional abuse. Those things are what make the horror horror—their connection to reality. Things you honestly fear are scary. Becoming a swan is ridiculous, even figuratively.

Black Swan does a ravenous job of sticking its tongue into the wretchedness of competitive performance arts, of driven women desperate for the perfect within themselves. The film is shot creatively and effectively, at times reminding me of Polanski. Sound is used devilishly to accentuate the cracking of joints and other physical—and real—ghastlies. All of the principal cast members give memorable, commendable performances, particularly Portman and Barabara Hershey. In the end, though, those elements don’t add up to much for me. .

I search for the perfect within. I shall be released.

The themes in the film do not secrete themselves into my thoughts, the way the concepts in other, better horror films do. I am not left scratching welts in my skull like I did post Videodrome or even Lost Highway. I am just made anxious and glad to see credits roll. And, still, surprised that this horror film did so well without people realizing that it’s a horror film. In that way, it’s like Jacob’s Ladder, another well loved film that is only surprising and scary if you don’t watch horror. If you don’t recognize that not all horror films involve slashers or rubbery monsters. In fact, only the dumb ones do. 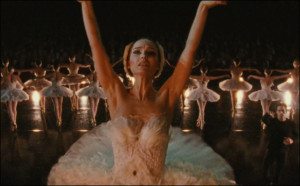 Black Swan is a well-made film, with excellent performances. It is not Aronofsky’s best work by a mile, though. It does not have the impact of Requiem for a Dream. It does not move me the way The Fountain does—a film I stand behind. It isn’t as enjoyable as The Wrestler. It isn’t even as psychologically thrilling as Pi.

But if it alerted you to the fact that you might appreciate or even just tolerate horror films now and again, I’m all for it.

2 responses on “Black Swan Plays with Its Pecker”