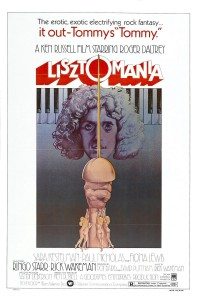 If one takes things at face value, then Ken Russell’s 1975 film Lisztomania is about composer Franz Liszt. Regardless of how one takes things, however, the film is completely unhinged, unabashed, and unrestrained.

Trying to glean information about Liszt from Lisztomania is like trying to learn about baseball by eating a Baby Ruth bar. Although, in Ken Russell’s case, the candy bar would have to be ten-foot long and shaped like an engorged phallus.

The film is like a freeform dance about the feeling of music, assuming you’ve got synesthesia and an overactive thyroid. It is a cacophony of themes and associations, each pumped full of steroids and cranked to the max. It start with bona fide superstar Franz Liszt — as played reasonably by The Who’s Roger Daltry, just off of Ken Russell’s film Tommy — sucking the bare breasts of the Countess Marie D’Agoult (Fiona Lewis). He does this in time to a metronome. As he bobs from boob to boob, Liszt adjusts his timekeeper, increasing the pace to farcical levels. And then there’s a sword fight, the vampires, the penis guillotine, WagnerFrankenHitler, and so on until the mighty spaceship organ (no, not that kind this time) saves the world from Nazism through a synth version of a Liszt opus as interpreted by Yes musician Rick Wakeman dressed as Thor.

The symbolism here escapes me. Must be too subtle.

If all that sounds good to you, I highly recommend that you watch Lisztomania, a film I barely managed to keep half an eye on while it played. While I can enjoy some over-the-top symbolism and creative rambunctiousness, this one did me in well before the piano that Liszt was nailed into was placed onto the train tracks so it could explode in a fireball like in a scene from The Lone Ranger. 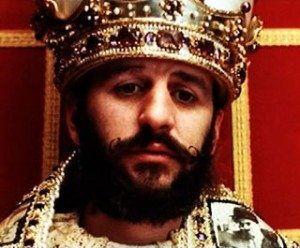 Should you so choose to inquire of Lisztomania, you’ll enjoy Ringo Starr’s turgid performance as the Pope and an exuberant display of naked flesh, mostly female and nubile. I’m not kidding about the ten-foot cock, either, although — sorry Daltry — that one’s only a model.

As to what Russell intended with this production, I’m left feeling quizzical. It’s not immediately apparent if he was just feeling dangerously unfettered after the success of Tommy or if his vision was grand and true but under- (or more likely, over-) done to a dangerous degree. Lisztomaia is so blitzophrenic and aphrodelic that turning away from it, and frequently, is only prudent. To call it a fever dream is to defame those that genuinely suffer from dengue.

After all, I would assume most of those afflicted with tropical maladies retain the sense to cast George Harrison as Pope and to realize that — whatever his questionable views concerning the Jewish people might have been — Richard Wagner died in 1883, six years before Hitler was even born.

Lisztomania does contain quite a bit of visual merit within its heavily dosed imagination. It is color and light and fire shaken liberally. While I couldn’t much stomach it as a film, I did see a number of stunningly arresting music videos in its length. Alas, Rick Wakeman’s versions of Liszt’s and Wagner’s music is about as atrocious as you’d expect. Even Roger Daltry can’t make them sound like the sort of stuff girls would go crazy for.

Which, by the way, they honestly did. Lisztomania was a real term, used in reference to the real Liszt. And back then, mania wasn’t something to be excited about, like a new Pokemon. It was something to approach with respect and trepidation, like a ten-foot cock.