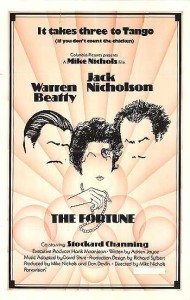 If you’re going to watch a movie—and why wouldn’t you, movies are awesome, you love them, you’re here to read about them—I would suggest not, under any circumstances, watching The Fortune, a movie from ’75 you’ve likely never heard of, despite being directed by Mike Nichols and starring Jack Nicholson and Warren Beatty, because, to put it plainly, it is really sincerely bad.

Granted, you might be curious about such a movie. Why haven’t I heard of it?, you might ask yourself. Surely it can’t be all that awful!, you claim to nobody, because, be honest, you’re alone and talking to yourself, aren’t you? It’s okay. I am too. But that’s just it: you haven’t heard of it because it’s so very wretched.

I watched it anyway, and look what happened to me. I grew hair in inappropriate places and my arms fell off. True story.

But so okay, you want to watch The Fortune purely for anthropological reasons? For film history reasons? Have at it. That’s why I did it. I had to know (plus I got to see it in a beautiful 35mm print, which’ll sucker me into just about anything).  Educationally speaking, The Fortune is a brilliant lesson in how to do everything in exactly the way it shouldn’t be done.

Beatty taunts us with his moustache

The Fortune, then. It’s a comedy set in the ‘20s. Warren Beatty plays what I guess I’m supposed to think is a rich playboy snob named Nicky, with a pencil thin mustache and a puckered face and the hint of an east coast snobby accent, but not really, because he’s Warren Beatty and he sounds the same no matter who he’s playing, only in fact he doesn’t seem to have any money to speak of, so maybe he’s a con man? I think maybe he’s supposed to be a con man. 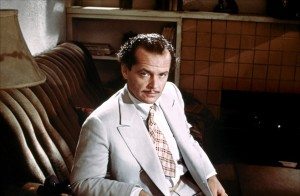 Nicholson will not be outdone, moustache-wise

He’s in love—or pretending to be? It’s impossible to say—with young sanitary napkin heiress Fredrika (Stockard Channing), but, alas, he’s married to someone else. To avoid being prosecuted under the Mann Act, which forbids one from bringing women across state lines for immoral purposes, he has Fredrika marry his embezzler friend, Oscar, played by Jack Nicholson as a not very bright loon, so that he (Nicky) can abscond with Fredrika without worry of being caught by the cops.

All of this business is taken care of within about a scene and a half, and it’s one of those movies where even though almost nothing has happened yet, it’s already the worst movie ever, and you can’t wait to see what happens next.

I think something akin to comedy happens next, but without being funny, which it isn’t in the least, it’s hard to tell. I’m not sure I can say definitively that this is Warren Beatty’s worst performance of all time, but I won’t let that stop me: this is Beatty’s worst performance of all time. As for Nicholson, I honestly don’t think he knows what movie he’s in or why or what the hell he’s supposed to be doing. Yet he gives it his all, or something like it. In one scene he has an epic mental breakdown I quite liked.

Not one of the funny scenes

This charming trio flies to California on a tiny little plane of the sort one would fly in the ‘20s, during which flight Oscar climbs out to walk on the wing mid-flight. We don’t see him on the wing. Only his face outside the window, such that one thinks, What the fuck? How’d he get outside the plane? Once on the ground he mentions the wing-walking. Ah, now it makes sense! No, wait. What? Was that supposed to be a joke? Hard to say. I may have hallucinated the whole thing.

What are they doing in California, you ask? I have no idea. Does anyone have any goal of any kind? Any purpose whatsoever? They do not. It’s rather baffling.

When it comes down to it, these guys don’t belong in broad comedies

The screenplay is credited to one Adrien Joyce, a pseudonym of Carole Eastman, who wrote the wonderful Five Easy Pieces. Apparently her original script was far longer and very different. It was changed so much that she took her real name off of it. Good move, one the actors and director would have been wise to copy. Which brings up an interesting point: why don’t actors ever use pseudonyms? I mean I know why, because you can see them up there on screen, they can’t hide. But still. They could use a different name and then just claim, in the face of all evidence, that it’s not them. “It’s Alan Smithee,” they would tell interviewers, “Not me.”

The business with the Mann Act is laid on thick. The movie opens with exaplanatory text to remind everyone what it is and that it’s serious business, and the characters repeat the explanation shortly thereafter. After which the Mann Act has nothing to do with anything. It’s used purely as a device to get these three together in this weird way where Oscar is married to Fredrika, even though she and Nicky are an item. Such a labored set-up might have been useful in a movie that had, say, a plot, a story, a point, or a single expressed goal for even one of the characters, but in a movie that has none of those things, like The Fortune, such a set-up is as dumb as everything that follows.

One or two failed attempts at comedic set-pieces later, Nicky and Oscar decide to kill Fredrika, and thus inherit her inherited fortune. Trying to kill her takes up the second half of this 88 minute (with credits) movie. Do you think a fair amount of goofiness would ensue with such a set-up? If so, you might just as well think that magical flying rabbits will emerge from the moon and sprinkle chocolate biscuits on your lawn come dawn.

Nicholson in handcuffs points to the deadly fountain

Nothing funny ensues. Instead, two guys dumb in a way only found in poorly imagined film scenarios fuck around for forty minutes, and then, in the end, after Fredrika learns they’d been trying to off her, walk her back to their bungalow hand in hand in hand, to live happily ever after. I am at a total loss as to what this ending has to do with anything that preceded it.

Why did Beatty want so badly to make this thing? Why did Nichols agree to direct it? Who on the planet earth thought it was funny? Nichols came out of the directing gate strong as hell with Who’s Afraid of Virginia Woolf and The Graduate, but nothing he’s made since is anywhere near as memorable. Most forgettable of all might be The Fortune. I look forward in the future to forgetting it myself.

3 responses on “The Fortune: Warren Beatty & Jack Nicholson In The Worst Thing Ever”