Oh, say can you see
by the dawn’s early light
what so proudly we hailed
at the twilight’s last streaming?

It’s just like the song says. Choosing something to stream off Netflix isn’t as simple as winning one’s independence from the British. It takes time, concentration, and eyeballs—and not just the white parts, either, but the yolks as well.

During the long, painful hunt for a watchable Netflix film, invariably one gets exasperated and surrenders. You choose something starring the Vins Diesel. You select something advertised with a poster featuring oversized breasts exploding during a car chase to the moon. 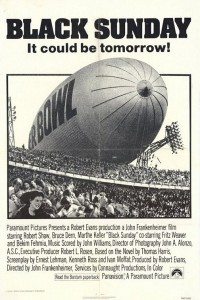 I feel your pain. And so I will now attempt to help you win a bit of cinematic independence by reviewing whatever crap I watched resignedly on Netflix streaming last evening. Maybe this information will entice you to follow in my eye-steps. Maybe it will hie you thither with alacrity. Most likely the latter, I’m afraid. But at least you will learn from my mistakes.

In this inaugural edition of Twilight’s Last Streaming we will watch an oversized boob exploding during a race to the Super Bowl. It has no Vins Diesel but it does have Robert Shaw pretending to be Israeli. The film is none other than John Frankenheimer’s long bomb, Black Sunday.

John Frankenheimer has made great films. Maybe you’ve enjoyed his The Manchurian Candidate or Seconds? These are excellent. Maybe also you’ve seen The Island of Dr. Moreau or Reindeer Games? These are also his work and not excellent. Sure, one may feature Marlon Brando dressed like a circus tent, but the appeal of that doesn’t last forever. Trust me; I’ve watched Moreau a number of times.

Don’t make me use my Israeli accent on you.

Frankenheimer also made The French Connection II, and it is the film he made right before Black Sunday. Both of those pictures feel like they were directed by someone who understood what William Friedkin did with The French Connection, but who couldn’t quite copy it. Frankenheimer struggles to get the right mixture of grit and vérité that produces films that feel vital and filthy.

But exploding boobs are the subject at hand. Let’s talk Black Sunday.

The screenplay is based on the only one of Thomas Harris’ novels that doesn’t star Hannibal Lecter. This is a shame, as some sociopathic cannibalism would have fit right into this understated plot. In terms of background, the real-life terrorist group Black September had staged a successful attack on the Munich Olympics in 1972, and that’s clearly the inspiration for this. In Frankenheimer’s film, the terrorists attack the Super Bowl instead of the Olympics and their weapon, of course, is a blimp.

So you see why I felt it was important to watch Black Sunday. It had a very good chance of being the best deadly blimp film around. Better even than Sky Captain and the World of Tomorrow. 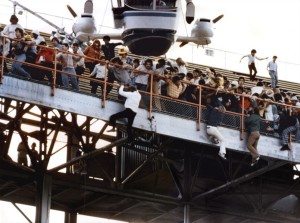 Alas, Black Sunday has not aged well. What was topical in 1977 is Velveeta today. Robert Shaw adopts a wholly ridiculous Israeli accent in the film’s starring role of Major David Kabakov. It’s silly enough to spoil the actor’s gruff appeal.

Over an untidy 143 minutes, Kabakov attempts to stop the dastardly Dahlia Iyad (Marthe Keller) from setting a record low attendance record for living humans at a Super Bowl. The Middle Eastern terrorist’s practical plan involves some sort of mass dart projection system affixed to the bottom of the Goodyear blimp, as flown and fired by a tail-chasingly insane Michael Lander (Bruce Dern). 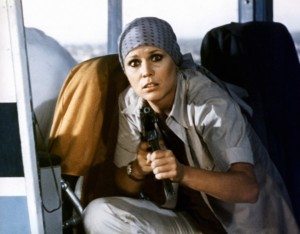 There are commando raids and stealthy assassinations and exploding telephones and one horribly green-screened dive-bombing blimp. This climactic sequence is actually interesting as Frankenheimer filmed at Super Bowl X for reals with the real Goodyear blimp.

Black Sunday isn’t a terrible film. It is also less than passably interesting. Paramount Pictures had thought that they had the next Jaws on their hands. This was another film with Robert Shaw, with a score from John Williams; it received stellar reactions from test audiences… but no. What they had on their hands was more of a dead shark. Or at least a sickly one. The story plods along. The cinema vérité look and feel comes across as slapdash instead of un-staged. The performances are not career highs, although no one does unhinged quite as well or as often as Bruce Dern.

Frankenheimer has his skills. Here, however, I find them in short supply. There’s one decent gunfight and the rest leaves you with questions. They are questions like, “What just happened?” and “Seriously?”

You said I could have ice cream!

I cannot recommend you stream Black Sunday unless you really really hate football or you adore implausible blimp attacks. If you want some gritty 1970s thriller action from Netflix streaming, try Charley Varrick with Walter Matthau instead. That also involves aerial stunts and explosives but it keeps things closer to the realm of believability. For a Bruce Dern fix, you could try Silent Running. It isn’t much better than Black Sunday, but it has robots and lots more of Mr. Dern running amok. It’s about space forests, so, yeah: there’s that going for it. It was also directed by Douglas Trumball, who did the special effects for 2001: A Space Odyssey and The Andromeda Strain.

The Andromeda Strain, by the way, is also on Netflix streaming. You might take a glance and assume it’ll be corny but you’d be wrong. There’s some interesting stuff in there and the story—a deadly pathogen coming back to Earth with a satellite—hits that fine edge between completely believable and crazy talk. Honest characters having honest reactions in extreme situations, only some of which are nuts. Watch it and let me know what you think.