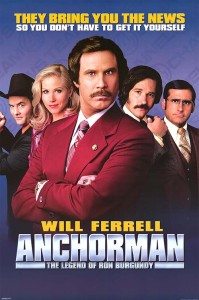 I say this knowing full well how much you and everyone you know adores this victory lap from Will Ferrell. I say this realizing how many times you’ve seen it, and comprehending that you’ve memorized entire scenes, and understanding that you fully intend to name your firstborn son Champ.

I say this secure in the belief that you saw the sequel and told your friends you liked it, regardless of what you really thought.

It’s not that I don’t have any affection for Will Ferrell—Elf is great—or that I don’t laugh while watching Anchorman. It’s just that when I laugh, my chuckles are as lazy as the film. They’re unfocused sniggers, not the rollicking guffaws or all-consuming chortles you get with a comedy that truly deserves your adoration.

In Anchorman, Will Ferrell and director Adam McKay are just legging it out. It’s a melange of whatever humor falls to hand, suited to the story or not. They’re so frenetic that they miss the best joke in the film.

Towards the beginning of the film, the chauvinist KVWN news team learns that their station is going to hire a woman newsreader. The perfect nimrod, Brick (Steve Carrell), responds by expressing his natural, justifiable concerns:

Yes. I agree completely. This bit is as funny as a menstruation joke told by someone who’s never menstruated can be. It’s not the funniest joke in Anchorman, though. That one, the one that doesn’t come at the end of the film, is missing.

Jump forward to the climax of this soft pudding of a movie, and you’ll see the selfsame woman newsreader—now anchorwoman—get shoved into an animal enclosure at the San Diego Zoo by a professional rival. What kind of animal enclosure you enquire?

Probably for the first and last time in his entire life, Brick had a thought that mapped clearly to reality: hiring the woman newsreader did in fact attract bears! When he and the rest of news idiots come to the rescue—putting their lives at risk—surely Brick will implode in the sublimity of the moment. Surely he’ll strut, or pass out, or in some way bring what we took as a joke back around to display the grand epiphany that will leave us all repositioning ourselves in the universe vis-a-vis bears and tampons.

Surely he’ll at least assume that the damsel in distress is having a visit from Aunt Flo.

Surely, just sitting here, reading this post, you can think of a joke that would fit perfectly in this moment, a joke that would be funnier than anything in Anchorman before or since. Not including such a joke would be a crime against comedy.

Oh. I get it. Brick is an idiot. And Will Ferrell said ‘uvula,’ which granted, is a funny word. And David Koechner got replaced by a rag doll. All of which has a ton to do with the story of Anchorman and isn’t just whatever laughs the team could find in the bottom of their man purse.

But, no, really. I’m glad you love Anchorman. I know how comforting it is to watch a film you know so well, one you’ve grown up with, even if it’s too lazy bring a perfectly ripe bear joke back around.

5 responses on “Why Anchorman Merits My Contempt”