Wait, let me explain. It’s the thing where the stuff goes throop-throop-throop and then that guy, I mean the pointy-headed underwater one? With the giant calves? No wait. That’s the other guy. The one with way too many bricks who’s actually a plastic horse. 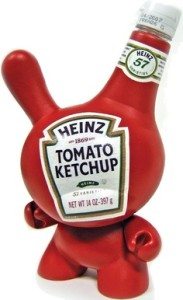 Stop. You’re making me confused. Quit speaking in French. Just sit still and get that vacuum cleaner out of here. Or no! Bring back the vacuum cleaner and some ketchup, too. Catsup? Ketchup? Is there a difference? How about if we say it in French?

That does sound different. It seems… Frencher.

Animated movies sense yes make and hoo boy! The understanding comes, like, in visual waves man. Can you taste it? It tastes like Wednesday.

Oh yeah. Now I feel it. Let’s watch some movies. Mind Control Double Features proudly presents two animated films from those that speak French, each perfect for making you cackle like duck with a beak full of helium.

Watch them both and win a free trepanning!* 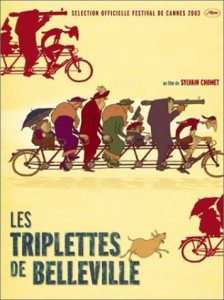 Okay. So there’s this old lady, see? And she’s got a grandson who she has to take care of, but then there’s Le Tour de France, and the mobsters kidnapping him, and those kooky biddies who play the refrigerator, and quite possibly the most stunningly perfect maître d’ of all time. Plus the dog’s nightmare.

Don’t just take my word for it, though. Here’s what some completely reputable YouTube commentators have said:

i watched this in school in grade 6 and now i’m going to watch it baked!
-Cocacolabob Lee

I had to watch Primer 4 times for everything to make sense. I’ve seen this 6 times in my life and I still have no idea what the fuck was happening.
-Fartmaster69

And, I swear, I did not even have to make up stupid names for these people. They DID IT THEMSELVES. Hooray the internet!

Maybe you better watch the trailer yourself so you understand what I’m gibbering about? 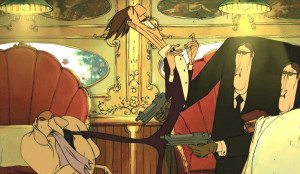 In case you’re still not clear after that taste, The Triplets of Belleville is an animated film from France, Belgium, the UK, and Canada. It’s in French, but there really isn’t much in the way of dialogue so your brain can strain trying to make sense of what’s happening instead of reading words. The film is a fantastic kaleidoscope of animation and imagination and prestidigitation. Triplets sucks you in to its dreamworld skitter step and when it starts to make sense, that’s the first sign of higher consciousness kicking in. Or an aneurism. It’s so hard to tell.

This film would have won the Academy Award for Best Animated Feature in 2003, but people are crazy. 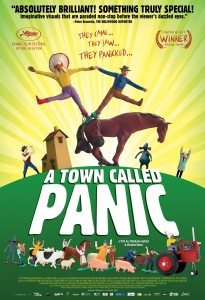 Stéphane Aubier and Vincent Patar wrote and directed this stop-motion bizarro stream-of-surreality feature based on their series of TV shorts—like five minutes each—of the same name. The shorts and the film all follow the totally normal exploits of three jovial housemates, Cowboy, Indian, and Horse. All three are plastic figurines. They live in a town full of other plastic figurines where they do normal plastic figurine things like take piano lessons and fight the giant penguin robot.

If you’re confused, don’t watch the trailer. It won’t help at all.

Maybe you sense I’m having a hard time describing these two films? Perhaps it’s because they’re untethered, but in ways that make you want to follow them into the vortex of lunacy.

How about this: A Town Called Panic features exciting and sensible things like this:

Watch these two films and bring me some waffles.

* Seriously. You won. Come on over.