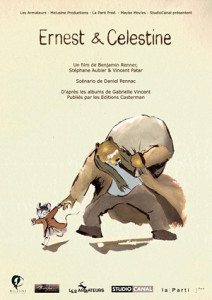 In the late ‘50s, a Belgian invented smurfs. Things have only gotten stranger over there ever since. I submit as proof the 2009 stop-motion animated movie, A Town Called Panic, which is loopier than a bowlful of curlicues. It was directed by Stéphane Aubier and Vincent Patar. Their latest animated oddity, Ernest And Celestine, was nominated for an Oscar. In a shock to all who study these things, the award went to Frozen, a movie from upstart animation neophytes, The Disney Corporation. Robbery, I tell you! Pure and simple! Granted, I haven’t actually seen Frozen, but that’s not going to stop me from opining on it. I opine thus: Ernest And Celestine is better.

It’s certainly weirder. I don’t need to see the latest Disney flick to know its standard story. Ernest And Celestine follows a different logic. One without heaps of character backstory. One where the odd is taken for granted. One where a mouse and a bear can be friends. 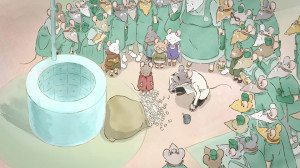 Hooray! A bag of teeth!

Which according to the world of the movie, is an outrage. Seems the normal world is peopled by bears. Beneath them, in elaborate cities build in the sewer system, live the mice. The mice have achieved their greatness in construction though the use of their teeth. But should a mouse lose a tooth, they will go hungry and die. Thus the art of dentistry is all-important. Replacement teeth are required, and where better to get them than from bears?

Meanwhile, the bears tell their children that the mouse-fairy will come to take their baby teeth and leave coins behind, not realizing that actual mice really will snag their teeth. Clearly some kind of ancient co-evolutionary social structures have been unconsciously built up by both bears and mice. Not that the movie discusses such things. But I am. Mostly because now I’m imagining little mice stealing my teeth at night while I sleep. 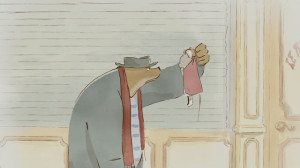 Celestine requests not to be eaten

Meanwhile, that’s not what the story is about. It’s about this very hungry bear, Ernest, a street musician hassled by the cops, who’s extremely grumpy and yells a lot and isn’t the least bit concerned with property damage and robbery, and Celestine, a wee mouse who, to the consternation of her wee mouse friends in the orphange where she lives, sees no reason why bears and mice can’t be pals.

Ernest inadvertantly rescues Celestine from a garbage can. She convinces him not to eat her, pointing him to a candy store he can rob. Turns out bears love candy and marshmallows. Later, she rescues him from the back of a police van, and he aids her in a massive tooth robbery. Makes perfect sense, trust me. 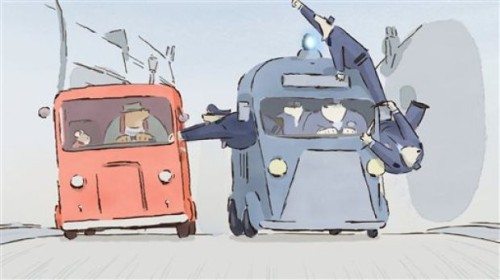 There’s a car chase, too

That’s all, really. Of course there’s the business with both Ernest and Celestine being chased by their respective police forces for crimes against bear/mouse co-habitation, among other, lesser crimes like robbery and general rabble-rousing. The pair hole up together. Celestine draws pictures. Ernest plays music. It’s something of a romance, this movie. 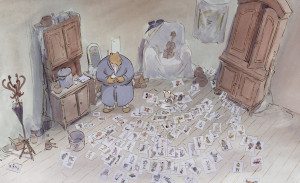 Unlike the wacky stop-motion of A Town Called Panic, Ernest And Celestine is animated in watercolors and ink. It’s lovely. If only American animation companies had the balls to use styles beyond big-eyed CGI blob-art, imagine the weird visions we might enjoy. But they don’t. We must therefore rely on smurfs—er, Belgians to provide us with animated movies as beautiful and original as this one. It’s funny and weird and simple and charming. Your kids will dig it. So will you.

Ernest And Celestine is being released in sub-titled French (the version I saw), and a dubbed version featuring the likes of Forest Whitaker, Lauren Bacall, William H. Macy, and Paul Giamatti. Which is some excellent voice-talent. Maybe I’ll catch that one too. 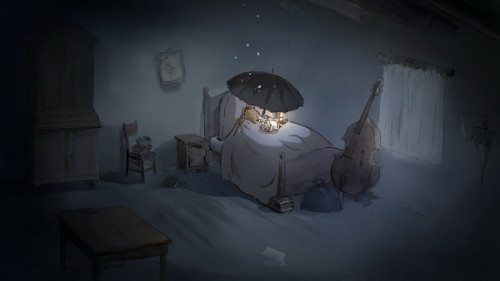