I don’t want to freak you out, but giant, dangerous, super-powered rabbits are everywhere. 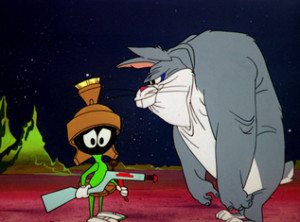 They’re huddled up under your desk. They’re lurking behind the agapanthus in the corner of the garden. They’re standing right behind you, quietly eating giant carrots and eyeing your orangey neck — I bet that spray-on tan doesn’t seem like such a good idea now, huh?

You probably haven’t noticed these über-bunnies because they are mostly invisible. Only very special people can see them. People who are so crazy they’re not crazy at all. They’ve gone all the way through crazy to come out the other side.

It’s you — everyone what doesn’t see the giant rabbits — who’s really crazier than whichever character Bradley Cooper is currently portraying in cinemas.

If you want to prove your (un)(in)sanity; no problem. It is easy enough for me to properly attune you to see these eldritch beasts. All you have to do is watch this week’s Mind Control Double Feature, which spells out the good and bad news about giant rabbits. 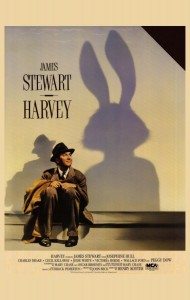 Good news! Elwood P. Dowd wants to buy you a drink. He’ll probably invite you back to his place for dinner, too.

Just pull up a seat at Charlie’s bar and Elwood and his pal Harvey will happily while away the afternoon with you, extolling the lubricating quality of multiple martinis and intentional amiability. Don’t mind the fact that Harvey is a 6′ 3.5″ invisible rabbit. You probably won’t even notice, particularly if you keep up with the martinis.

Harvey, an adaptation of Mary Chase’s play, may be the most genial film ever made. I know that doesn’t sound particularly exciting, but there is something so wonderfully pleasant about the pace, comedy, and affection in the film that you’d have to have a sour puss indeed to not come out lousy with the warm and fuzzy. We’re talking giant rabbit-sized quantities of warm and fuzzy. 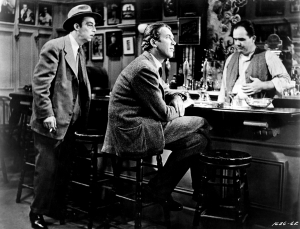 The great James Stewart embodies Elwood, the story’s main character. Elwood is a tippler who lives with his widowed sister Veta (Josephine Hull) and his unmarried niece, Myrtle Mae (Victoria Horne) in their stately home. While it’s hard to take against the amiable Elwood, Veta and Myrtle Mae have reached their wits’ end.

He drinks quite a bit, brings random strangers back home for dinner all the time, and is always accompanied by Harvey. And whether or not you can see Harvey — which you can’t; invisible — this supernatural creature makes it awfully difficult for Myrtle Mae to land a husband. This drives Veta to finally, reluctantly, have Elwood committed. 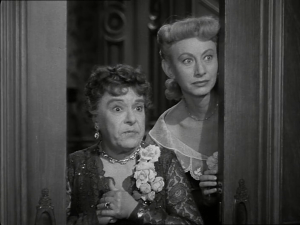 You have a lot to learn, and I hope you never learn it.

Now, you might think the drama of Harvey comes from Elwood attempting to prove both his sanity and the reality of his giant floppy-eared friend. This is not so. Elwood wouldn’t dream of being so difficult. The drama in Harvey comes from Veta and Myrtle Mae and the staff of the local sanitarium — Dr. Sanderson (Charles Drake), Dr. Chumley (Cecil Kellaway), and Miss Kelly (Peggy Dow) — trying to comprehend the sanity of trying to normalize a fellow as happy, sweet, and generous as Elwood P. Dowd.

As Elwood says in the film: 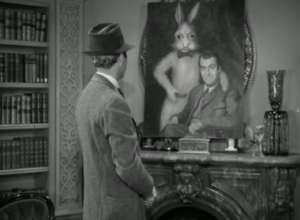 Harvey is one of my favorite films. It’s quietly funny, abundantly lovable, and gently demonstrative of how sane anti-social behavior can be, when enacted peacefully. Why struggle against reality when you can win out over it?

As for the giant rabbit, he’s actually a pooka — a beastie from Celtic mythology — and for all you know he’s standing right behind you right now.

Perhaps you should offer to buy him a drink? 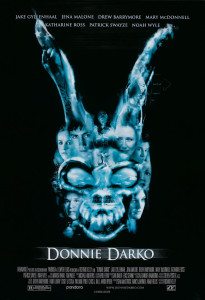 Frank, like Harvey, is a giant rabbit. In this case, only Donnie Darko can see him, but that’s because Donnie is an insane superhero.

Donnie Darko is one of those films that exists outside of the space-time continuum. Where Harvey is exuberantly sweet, this one is a lot more like that feeling of falling that wakes you up with a start in a cold sweat. Wake up. Wake up. The world is ending.

Donnie Darko basically takes place in my New England high school, in my 1980’s rural town, with my marginally unpopular friends. It stars Jake Gyllenhaal as Donnie, his sister Maggie as his sister Elizabeth, and features Mary McDonnell, Jenna Malone, Patrick Swayze, Drew Barrymore, Noah Wyle, and Seth Rogan. The plot makes perfect sense as long as you never ever ever try to explain it to anyone.

Donnie, an emotionally disturbed teenager, sees a vision of a giant rabbit named Frank. Frank tells him the world is going to end and saves him from being crushed to death by a falling jet engine. In the time before the world ends, Frank guides Donnie into doing the things that must be done for the world to end. These things make perfect sense as long as you never ever ever try to explain them to anyone (or watch the Director’s Cut, which is curious but certainly not better than the original release version).

Watch out for baby mice.

As astute readers will note, Frank isn’t actually a rabbit. He’s more of a temporal oddity in a scary bunny suit. Still: since no one can see him but Donnie Darko, the judges have ruled that he qualifies as a “giant, dangerous, super powered rabbit.”

Plus, in this film, as in Harvey, our lead character’s insanity is proven so sane it’s insane. All thanks to the wisdom of the rabbits.

So consider that the next time you’re given supernatural guidance from an oversized bunny. It’s probably best to just do as they say.

Donnie Darko has one of those scripts that can’t be improved upon or remade or sequalized, although they tried and failed. It feels simultaneously utterly fantastic and horribly real. For the film’s runtime, you are immersed in the worlds of Donnie Darko. You feel his fear. You feel his love. You watch him act — behaving the only way he can — and I ask you: where on the lifeline will you place him?

Watch these two films. Buy Harvey a martini. Have unquestionable devotion to Sparkle Motion. Wonder about the sanity of rejecting reality. Listen to the giant rabbits.

They are here to help.