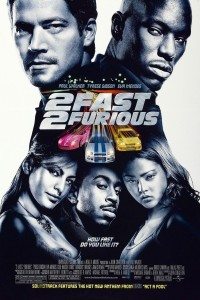 Ne’er has there been a more aptly named film than 2 Fast 2 Furious. Well, that may be hyperbole, but you understand what I’m saying.

Where The Fast and the Furious hit the sweet spot between lullingly dull and perfectly thrilling, its sequel squanders all of the original’s cool.

It is too fast and too furious, and neither in a way that marks an improvement. It is trying much 2 hard. 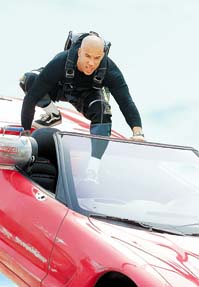 Wait. I found a parking space.

In it, Vin Diesel plays an extreme sports terrorist (?!?) who is enlisted by spies to stop world destruction with his meaty face. It is his vast skill with a jet ski that saves us all from chemical doom. So, in one sense, it might as well have been called 2 Fast 2 Furious and why not? Who knows. Who cares.*

What I do know is that the film that was actually called 2 Fast 2 Furious is also a turkey. Instead of Rob Cohen, this one is directed by John ‘Boyz n the Hood’ Singleton as if it was a commercial for Axe Body Spray. Instead of Vin Diesel, Paul Walker gets Tyrese Gibson as his co-star —  a better actor than any number of Vins Diesel, but less compelling nonetheless.

Taking place some vague amount of time after Walker’s O’Conner character let Diesel’s Toretto escape justice at the end of The Fast and the Furious, 2 Fast 2 Furious begins with yet another illegal street race. This one is in Miami and is attended solely by people with well-considered outfits and freshly styled hair. Everyone gleams. No one has spilled beer on his or her shirt or rudely brought their slightly unattractive cousin. It looks as staged as everything else that happens over the following hour and a half.

So, too, the automobiles. Where The Fast and Furious featured real auto racing, this one features a lot of lousy computer graphics. Michelle Rodriguez has also bowed out and her tough female racer role gets usurped by Devon Aoki. Aoki’s attractive in her pink car and her schoolgirl skirt and with her near complete lack of muscle mass, but she’s obviously some teenager’s fantasy of a race chick he would one day hope to bang and then brag about. 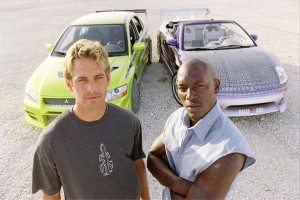 I’m too sexy for my car.

She didn’t even have a driver’s license when she was cast in her role. She’d only ever driven a golf cart. Not that it matters. The racing — whether real or not — reads as fake. Some of this is CGI and some is just Singleton’s music video-style direction. Actor Paul Walker brought his own car and did some of his own racing stunts, but he shouldn’t have. Confusing yourself for a fictional character you play in a film can be fatal.

After making six and a half of these films, Walker died in an auto accident when the car he was in sped into a light pole, probably while the driver was attempting a drift racing move.

They say that art imitates life, but in this case, it is a pale imitation and in poor taste.

After 2 Fast 2 Furious‘ kick-off race is won by O’Conner — who jumps his car off a bridge to fly over another car that is also in the process of jumping off the same bridge — we get what passes for a plot. The law catches up with that rogue O’Conner and they want to make a deal with him: if he helps them catch this Argentinian drug dealer (Cole Hauser) by acting as his courier, they will forgive his crimes. O’Conner ropes in old, estranged racing buddy Roman Pearce (Gibson) and together they do stupid things in fast cars and pretend they’re in a Hallmark Channel version of Scarface. Eva Mendez plays an undercover cop embedded in the drug dealer’s organization (and pants) and she acts as well as she’s able.

I’m a cop and so are both of these.

I think it’s fair to say she was not cast for her acting talents nor her skills behind the wheel.

Regardless, the film continues — alternating scenes in which cars move quickly with scenes in which attractive ladies bend over and wiggle. While this tried and true formula can work well — as in The Fast and the Furious — here it just sucks exhaust. 2 Fast 2 Furious has zero magic.

And then they jump a car onto a yacht.

Hopefully in The Fast and the Furious: Tokyo Drift I can look forward to O’Conner jumping a car onto a yacht onto Godzilla. Otherwise, I’m not sure why I’d continue on in the misguided plan to watch all of these films. Certainly this second one must be the worst of the bunch? Let us all hope so.

Although why they didn’t call the third film Tres Fast, Tres Furious is beyond me.