I have, to my great credit, learned how to get away with practically nothing. And doing so is vastly harder than you might imagine.

I mean, c’mon. You try it. Try to get away with practically nothing. It takes an astonishing amount of effort. Particularly when your boss at the neck-breathing factory is breathing down your neck.

Serves you right, anyway. Never should have taken that job.

But, even if you’re stuck in a horrible neck-breathing job, or if you’re swamped learning how to crawl up someone’s butt at butt-crawling college, I’ve got the answer. The only thing you need in order to get away with practically nothing is an improbably complicated heist.

Chances are, after all is said and done and the warden has confiscated your oil paints, that you’ll have practically nothing. And ain’t no one gonna be able to take that nearly-nothing away from you. Except the warden and the screws and your cell-mate and Big Linda.

This week’s Mind Control Double Feature presents for your educational enrichment two heist movies; but they aren’t your standard flavor of caper. In these half-comic, half-heist combinations, our crack teams of larcenous aspirants get away with very little.

And they do so successfully. 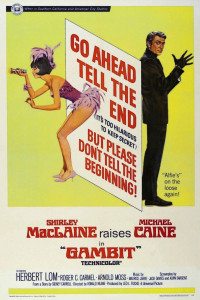 The first time I saw the Michael Caine / Shirley MacLaine vehicle Gambit my smile went all silly. I’d been watching every heist pictures I could lay my hands on at the time, and they all felt so rote. Not Gambit.

But, like Shirley MacLaine’s hindquarters instruct you via the film’s poster, “Go ahead tell the end (it’s too hilarious to keep secret) but please don’t tell the beginning!”

Well, ain’t no flibbity flabbity hindquarters gonna tell me what to do. Not that I’m calling MacLaine’s posterior flabbity, mind, but still: If you haven’t yet seen Gambit, might want to watch it before you read on because I’m going to give away the beginning.

There’s no devious plot twist to be spoiled; it’s much better. Your expectations are about to play tricks on you.

All this happens under the watch of solid director Ronald Neame. You may have caught his little known film, The Poseidon Adventure, or the forgotten Walter Matthau flick he helmed, Hopscotch, or know his work as a writer and producer with David Lean and others (Brief Encounter, etc.). Then again, you may be more familiar with the work of recent Spider Man scribe Alvin Sargent, who co-wrote Gambit based on Sydney Carroll’s novel (who, in turn, wrote The Hustler).

All told, this picture’s got a fine pedigree, and it shows. And sounds, too, with a score by Maurice Jarre.

But those begats can begone. Spiderman 3? Who cares? Gambit blooms with Caine and MacLaine and their arch interplay.

The story goes as thus: In swinging ’60s Hong Kong, a cocky Cockney thief of mild renown, Harry Dean (Caine), slides into the International Palace of Joy. There he joins compatriot Emile Fournier (John Abbott) in eyeballing Nicole Chang (MacLaine), a dancer who’s wiggling her way fetchingly across the stage.

She is, they agree, perfect. (Her literate hindquarters not withstanding.)

Is this monocle on right?

When Nicole takes her seat — selling dances at 50¢ HK a twirl — Harry tells Emile to watch how wonderfully everything will work out. His words blend into action as he lures Nicole to their table with the promise of $5,000 US simply for playing a part in their audacious plan. She acquiesces and we follow the trio on a jaunt to the mythical Middle Eastern nation of Dammuz, where Nicole is a dead ringer for both the deceased wife of the super wealthy Shahbandar (Herbert Lom) and his priceless ancient bust of a Greco-Burmese-Chinese princess.

How smoothly everything goes! Exactly as Harry has laid it out. Nicole doesn’t miss a beat, either. Her demure distractions allow Harry to cleverly swipe the statue and together they do the off back to the Far East. So far so straight-forward.

That’s no way to get away with practically nothing. 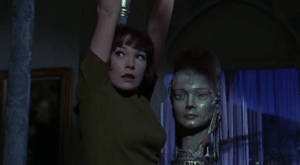 And don’t call either of us Shirley.

Luckily, if you’ve been paying attention, you’ll have noticed that the film’s only been running for about half an hour. Which is Harry’s cue to say, “and that’s the plan, Emile, down to the very last detail,” since he hasn’t even moved from his seat at the International House of Joy yet.

A full act into the film, and it’s all been in Harry’s head. Only in a fantasy — or a film — could a complicated caper come off so smoothly. And having that rug pulled out from under you puts you in the perfect frame of mind to watch how the heist goes in reality — understanding that in this case reality is the world trod by Shirley MacLaine and Michael Caine.

Harry stands up, goes to talk to Nicole, and it goes pear-shaped almost immediately. MacLaine’s Nicole is exactly what Harry didn’t plan for; human, complicated, willful. For one thing, unlike in his fantasy, this version of Nicole talks. Quite a lot actually. She’s also smarter and nimbler than he is, which Harry doesn’t know whether to find infuriating or enticing.

As the duo attempt to steal the statue for real, things go so screwy that they start to come full circle. 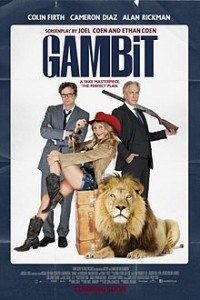 What could be funnier than a lion?

Gambit may not be the most tense heist film you’ll ever see, although Neame does manage a few moments that will get your blood moving. It isn’t as bleak as The Killing or as stylish as Ocean’s Eleven. It is, however, romantic — both in terms of its subject and its take on the world. Keep an eye on love in Gambit. It’s a full-fledged member of the crew, expert safe cracker that love can be. Fantasy, too, plays a crucial part. Fantasies of who we are and what we could do will catch you up, even with the film’s bait-and-switch beginning giving you a wink.

You know the show’s all malarkey, and yet it sucks you in. And that matches the ending, which isn’t hilarious, but which demonstrates the writers knew what they were doing. They were teaching you how to get away with practically nothing and how to be thrilled to get it.

I watch Gambit and I want to applaud throughout. It looks a bit goofy. It is a bit goofy. And — you know what? — sincere goofiness is something filmmakers today seem to have forgotten how to handle. Somewhere in between complicated caper and delightful romp, Gambit makes its score.

I’m sorry to say, though, that Gambit was recently remade. The new version has already been released in Britain, but it was held back from the States until later this year, probably because it’s supposed to be resolutely terrible. Scripted by Joel & Ethan Coen, starring Colin Firth, Cameron Diaz, and Alan Rickman, it’s said to only hold faint resemblance to the original version. 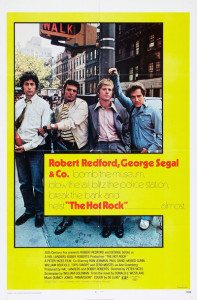 Based on the first of a series of books by Donald E. Westlake, The Hot Rock teams Robert Redford, George Segal, Ron Liebman, and Paul Sand as a crew of four of the unluckiest yeggs you’ll ever meet. They’re hired by an African diplomat (Moses Gunn) to steal a diamond of great significance to his country. And they do it over and over again.

But they get away with practically nothing.

Like Gambit, The Hot Rock has a swell pedigree — even though you’ve likely never heard of or seen this movie. Director Peter Yates has made a number of winners, including Bullit, Mind Control favorite Breaking Away, and (cough) Krull. Westlake’s novel was adapted for the screen by screenwriting great William Goldman. The film has a prestigious score, too; this jazzy one by Quincy Jones.

What could go wrong?

So why no love for The Hot Rock? The cast is great, including the voracious scenery eating of Zero Mostel. Some comic moments may drift into exaggeration, but Redford’s Dortmunder reins in the drama. He’s a locked down world of frustration. Not that Redford doesn’t find moments to shine, gnawing on the anxiety and growing desperation that drives his character; it’s just all in his expressions. The story is even sweeter: clever, refreshing, and bold. The film’s tone… well, it’s hard to get comfortable with. That’s likely what kept audiences away.

You’ve come expecting a heist picture, and while The Hot Rock is full of capers, it’s also lined with quiet comedy in a way that feels off-balance. Neither aspect takes the lead assertively. Instead, The Hot Rock is a film that seems to avoid big moments. Even when the crew’s pursuit of the diamond leads them to ridiculous situations, the film still feels small. It feels human.

The Hot Rock is one slow burn. Dortmunder is a genius at planning crimes — that’s what he does — but reality always gets in the way. That’s what it does. Time and again, the crew gets their hands on the stone only to lose it due to the minuscule mistakes that keep master criminals and grand conspirators from existing outside of fantasy. It’s these little moments of imperfection that make the film wonderful.

Watching The Hot Rock, you’ll get a sense of how it squirms from the start — in a scene that Goldman actually wrote for Butch Cassidy and the Sundance Kid, but that got cut. Supposedly, it’s based on a real conversation Cassidy had with the Governor of Wyoming. Dortmunder gets released from prison, picked up by his nebishy brother-in-law Kelp (Segal) and is almost immediately cajoled into planning a job.

It’s a good plan, too. All four of them.

Each attempt has its own blend of tension and despondent humor. Each ramps up the stakes, requires a bit more materiel, and costs Dortmunder that much more of his soul. Getting away with practically nothing ain’t no walk in the park.

I don’t think The Hot Rock works quite as well as Gambit, but it isn’t standard fare by a mile. Yates’ soft focus, subdued style makes each scene feel tentative and almost bound to fail — which fits. It’s a film about fantasy that oozes humanity. By the time Dortmunder is intently intoning “Afghanistan banana stand” and — just look at his face — knowing how desperate he sounds and is, you’re right there with him.

All he wants is one lousy priceless diamond of international significance. Is that too much to ask?

Maybe it is. I guess you’ll have to watch The Hot Rock to find out. 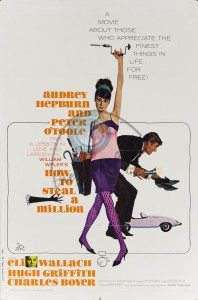 And, if you make it through these two and want more, check out How to Steal a Million with Peter O’Toole and Audrey Hepburn. If anyone can get away with practically nothing and make it look easy, it’s those two. It’s got the same blend of crime and comedy, but a more traditional series of twists. And the inimitable Eli Wallach.

One response on “Mind Control Double Feature #92: How to Get Away with Practically Nothing”