According to cartographers, a trap street is a fake one — an imaginary avenue added to maps to ensnare thieving competitors. In Vivian Qu’s Trap Street this paradigm gets flipped. The innocuous looking and sounding Forest Lane is quite real. It’s the maps that pull the wool. 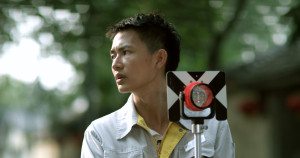 Playing at the 57th Annual San Francisco International Film Festival, Trap Street slips us alongside the insubstantial and innocent Li Qiuming (Lu Yulai), a listless trainee survey engineer. It is his job to update the maps that feed the city, to install and sweep for surveillance equipment on the side, and to make good for past missteps. When he goes all dreamy over a damsel who works down the here-and-gone Forest Lane, writer-director Qu taunts us with a mystery.

There is romantic pursuit, there is misdirection, there is danger — but all of it in barely registering quantities. Slow, simple, unexplained scenes work well, but not together. To imply that Trap Street is a film noir would be false. It is more a cracked window through which one senses odd and occasionally enticing aromas. 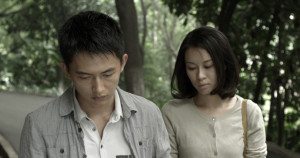 Lu Yulai’s wispy youth keeps his central character held close, and that is perfectly believable. His femme fatale Guan Lifen (He Wenchao) offers less in the way of engagement as written. The film, as a whole, offers less. The information is missing, like that on a manipulated global positioning system. Sometimes an absence of that sort can work inspirational magic, such as in Under the Skin or Once Upon a Time in Anatolia, evoking much from basic ingredients. Your imagination hungrily fills in the shadows. In this case, I left uninspired.

Vivian Qu tickles questions of governmental control and deceit with Trap Street, but she provokes only minor reflex reactions. Who her characters are, what they have done, and why — these answers never begin to clarify. It could be cultural; if I were Chinese I might relate her hints to commonly understood situations.

I’m not Chinese, though. I didn’t understand what this boy had stumbled into, even if I could relate to his juvenile reactions to possible romance. Trap Street seemed a muddled riff on The Conversation, but where Coppola’s film reeked of conspiracy and paranoia, this one threatened with impersonal happenstance.

What befalls Lu Yulai could threaten us all — but without understanding what exactly that threat is, we’re left with faint cause for concern. There are fine moments of tension, awkward bits of forced romance, and altogether too much room to get lost down this Trap Street.

Vivian Qu’s TRAP STREET will play at the 57th San Francisco International Film Festival on April 26 and May 4 and 6, 2014.

ALL PHOTOS COURTESY OF THE SAN FRANCISCO FILM SOCIETY.