I feared watching Beneath The Planet of The Apes. Of the original Apes sequels, it’s the only one I’ve seen in adult life, and I didn’t remember it being anything but bad. Now I have watched it. And while it is, in many, many ways, quite terrible, it is also, in its own special way—and by “special” I mean “cognitively challenged”—stupendously awesome. 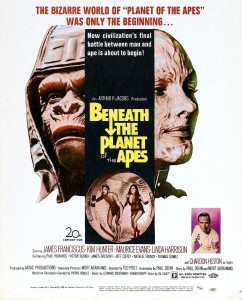 The studo desperately wanted a sequel to the original. They returned to Rod Serling to write it, but they didn’t like his script. They returned to original novelist Pierre Boulle, but didn’t like his story outline. Finally they went to writer Paul Dehn (co-writer of Goldfinger, and soon-to-be-writer of the next two Apes sequels). They wanted Heston, but he wouldn’t star. He agreed to appear briefly on two conditions: that his character die, and that his salary be donated to charity. They wanted Roddy McDowell to return as Cornelius, but he was busy. They wanted Franklin J. Schaffner to return as director, but he was making Patton. They wanted Jerry Goldsmith to return as the composer (who I forgot to mention when writing about Planet of The Apes; Goldsmith’s music is atonal and percussive, avant garde in the extreme, and really just great), but he too was working on Patton. Finally, despite the first movie’s success, the budget for the sequel was cut in half.

So they weren’t exactly working with the A team for this one. And it shows. Oh lord does it show.

Is it just me, or does Heston look really weird in this movie?

The first problem: without Heston, who’s the talking human? Beneath opens with the final scene from the first movie. Heston as astronaut Taylor rides down the coast with Nova. They find the Statue of Liberty, then continue into the Forbidden Zone. Strange sights appear from nowhere: lighting, walls of fire, crevasses in the earth. Heston goes to investigate, and literally vanishes.

Meanwhile, another spaceship has crashed on the planet, and the only survivor is a bearded, blond-haired astronaut, Brent (James Franciscus), who looks essentially identical to Heston. Moments later, Nova rides by, picks him up, and takes him to check out ape city.

We then have to rapidly go through with Brent everything we went through with Taylor in the first movie, to wit:

Say, I went to that festival…

Okay, we’re back. Brent and Nova wander the subways until finding a society of super-smart, telepathic humans who, in their cathedral, worship a shiny golden nuclear missile, on which are inscribed the Greek symbols for Alpha and Omega. Which means, says Taylor, who they discover in a jail cell, that it’s a doomsday bomb, it’ll blow up the whole planet. These maniacs! They’re finally going to do it! 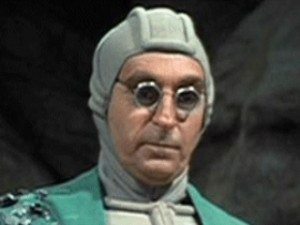 But first, before they get to Taylor, Brent is telepathically interrogated by the leaders of the humans (one of whom is played by Jeff Corey, who I know best from Seconds, Butch Cassidy & The Sundance Kid, and In Cold Blood, but who, from ’38 to ’00, racked up 231 screen credits; now that’s a working actor), who are terribly unpleasant and fill Brent’s head with painful psychic noise. Also, they’re mutants who pray to the beauty of nuclear fall-out and wear rubbery human-masks over their blue, veiny mutant-skin.

It’s their psychic abilities that have created all the odd happenings in the Forbidden Zone. So not happenings at all, but illusions. Learning that Brent has been to ape city, they want to know what the apes are up to. Brent gives in to their tortures and tells them (why wouldn’t he just tell them right away? Shhh…)

Singing mutant songs to the bomb, skin-masks in hand

Back to the apes. The gorillas, i.e. the dumb soldiers, have decided to invade the Forbidden Zone, just in case there’s anyone there to kill. The wise orangutans, led by Dr. Zaius, aren’t so keen on the plan, but Zaius agrees to go with them. The chimps, those peace-loving wimps, hold a sit-in with protest signs to block the army from leaving. They’re rounded up by gorilla cops and put in pens. So topical, this movie.

And it is. Peace protesters, a simplistic military bent on destruction, fears of nuclear annihilation. It’s a movie very much of its time.

Speaking of ape city, the early scene where Brent and Nova talk to Zira and Cornelius in their little ape house is lit, designed, and shot exactly like a sit-com. I honestly found myself listening for a laugh-track that never came. Though no one’s going to single out Franklin J. Schaffner as a genius director, his style is sorely missed in this sequel. At least he knew how to shoot a film. Director of Beneath, Ted Post, had been known primarily for television and for the Clint Eastwood dud Hang ‘Em High. He is a director without a sense of the cinematic.

Apes sweating it out

The humans did their best to keep the apes out. They filled the Forbidden Zone with a massive illusion featuring captured gorillas writhing and bleeding, tied up like scarecrows, a wall of flames rising before them, and towering above it all, a massive statue of the ape Lawgiver, his face covered in running blood. But the illusion failed to fool Dr. Zaius, who rode his horse right on through it.

The mutant humans are shocked. Seems the ape brains are too primitive to long be fooled by advanced telepathy.

The mutants attempt to launch their doomsday bomb (presumably unaware it will destroy not only ape city but the entire planet). Taylor and Brent and Nova must stop them. Only not so much Nova. A gorilla shoots her dead.

And so the finale. A shoot-out in the cathedral. The mutants are stopped from launching the bomb, but just barely; only one crystalline lever on the control panel is left to be depressed. Brent blasts away at gorillas, killing one after the other. Taylor reveals himself to Zaius, begs for help, but Zaius won’t do a thing, says man is only capable of destruction.

At which point Brent is machine-gunned to death, so Taylor, himself mortally wounded, lunges forward and presses the final lever, triggering the doomsday bomb. Weird end-of-everything lighting fills the screen, and an ominous, omnicient voice intones: “In one of the countless billions of galaxies in the universe lies a medium-sized star, and one of its satellites, a green and insignificant planet, is now dead.”

Interesting times there in 1970. The Summer of Love was three years stale. Didn’t take long to be replaced by despondency and fear. The producers wanted another big ending to rival that of the first movie. I suppose this counts. I have a hard time finding any meaning in it, aside from the observation that humans are evil and no matter the circumstances will blow themselves up. They blew themselves up once, only to send an emissary to the future to blow themselves up again, this time for good. I guess the apes were right about us.

I have to give Beneath The Planet of The Apes credit for unbridled loopiness. It’s got a slow first half that’s a limp retread of the first movie, but once the mutant, telepathic bomb-worshippers appear, it turns a corner into bad-movie-bliss. I hope the next three sequels maintain this level of the absurd.

2 responses on “Going Ape #2: Beneath The Planet Of The Apes”