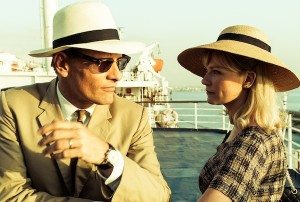 Like your crazy aunt Babette’s purse, the 57th Annual San Francisco International Film Festival opened, just this Thursday evening, to display its mysterious and somewhat intimidating contents. Films from all over the globe — Chinese noirs, Kazakh social dramas, Costa Rican comedies — leaned their shoulders into the program, hoping to be selected by you for a couple hours of easy labor at a somewhat honest rate. To begin: The Two Faces of January, the first feature by successful screenwriter Hossien Amini.

The festival has requested reviews be held for the film’s impending release, but here’s a clue: settle in for a ’60s-set, character-driven thriller that springs from the literary mind of Patricia Highsmith. That’s Viggo Mortensen, Kirsten Dunst, and Oscar Isaac acting squiggly throughout the scenic Mediterranean.

At the opening night party, most of the folks I schmoozed had good things to say about The Two Faces of January. I was less enthusiastic about it, but part of that is my concrete lack of appreciation for Kirsten Dunst, whom I believe peaked with Bring It On. She’s supposed to be the object of affection of her co-leads but I couldn’t decipher why, save her lush figure. Not enough to drive me to madness and murder, glad to say.

Amini has picked strong source material for his film, but the intricacies of character that initially intrigued me disappointingly gave way to an uninventive thriller of third act. I’ll have to check out the book and see if the tome, which inspired Amini as a student, does the same for me.

But the San Francisco International Film Festival kicked off swell, brought in a full house for the film and the party, and the list of films I’m eager to see keeps growing. I’ve heard good things about Tangerines and The Last Season, spoke with Ryan Wicks, the director of the short film Spacetime, which sounds excellently weird, and stayed up late last night to catch Coherence — about which more hopefully on Monday.

Tonight’s film: Frank! Looking forward to watching a giant fiberglass head which contains the fleshier head of Michael Fassbinder. As, I’m sure, are you all.