After a hard day’s ride through the unforgiving, sun-blased Texas desert—my mouth dry, my saddle sores burning, my cattle long since run off by Mexican rustlers—there’s nothing I like better than kicking back in the local saloon with a glass of warm whiskey strong enough to peel the paint off an outhouse and enjoying the laconic song stylings of an aging, bored, German madam who’d sooner shoot herself dead than smile at me. 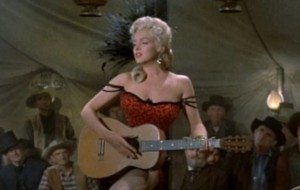 That’s my kind of woman right there, cowboy. The kind of woman no man in boots, spurs, chaps, and a pair of six-shooters can resist.

A woman like that attracts good men and bad men alike. Mostly bad men, though. Like sheriffs and mayors and murderers and rapists and what have you. The worst of the worst. Though truth be told, sometimes those men who seem baddest of all—wanted by the law or maybe workin’ for it—are the ones with the purest of hearts.

For this week’s Mind Control Double Feature, we look at the ways of the old west as they really were. No movie shenanigans here. Just the unvarnished truth. Because you know what happens when you varnish the truth, don’t you? It gets all sticky at first, and then it’s kinda shiny, but you leave it in the sun too long and it flakes off, and then where are you? I ask you, good sirs and madams—where are you then?! 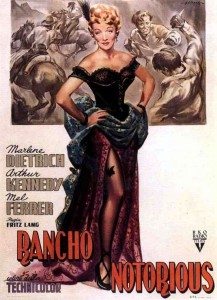 Having only limited knowledge of westerns pre-1960s, I can’t tell you that Rancho Notorious is the most unintentionally hilarious western ever made.

But I’m going to tell you so anyway.

More ludicrous even than Johnny Guitar (which you are also strongly encouraged to watch posthaste), Rancho Notorious tells the story of a man whose search to find the killer of his dearly beloved leads him to a secret ranch run by an ex-prostitute turned crooked business-woman, one whose temptations no man—no criminal man—can resist.

And the name of this devilish ranch, where murderers and rapists and thieves rub shoulders, a name no man dare speak lest he lose his very life for so speaking? 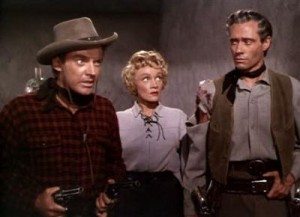 Marlene and her men

Say it with fear if you must say it at all! The original name of the movie was in fact The Legend of Chuck-a-Luck, but it was deemed too terrifying a title (one must assume), and was replaced by Rancho Notorious. It’s directed by Fritz Lang with as much style as he could muster this late in his career, shooting in garish Technicolor against some of the most striking backdrops you’ll ever fail not to notice (I think one had a giant crease running through it, bit of a giveaway, that).

It stars Arthur Kennedy (who I am only ever able to imagine as a newsman from his roles in Lawrence of Arabia and Elmer Gantry) as Vern Haskell, whom me meet chatting up his lovely fiancée, Beth, in her pa’s general store. Vern leaves just as two mean looking fellas ride up. One of them, Kinch, enters the store, forces Beth to open the safe—then gives her an unmistakably salacious look. The safe’s not all she’ll be opening for him.

From outside we hear a scream and a gunshot. Kinch runs from the store. He and his partner tear out of town. Vern is sent for. Beth is dead. And, we are made to understand clearly, she was raped before she was shot.

So, yes, it’s not yet an unintentional comedy. We’re getting there. 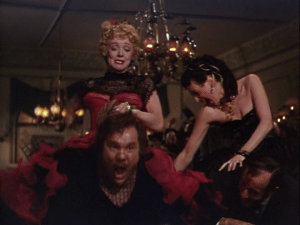 Enraged, Vern takes off after the crooks. He discovers one of them dying—shot by the paranoid Kinch—slaps him around, demands to know where his partner went and who he is. The dying man’s last and only words: “Chuck-a-luck.”

Vern spends, I don’t know, a couple of years (not an exaggeration) wandering the west, asking everyone he meets if they’ve ever heard of Chuck-a-Luck. Eventually he gets lucky. Someone’s heard of someone, and someone knows someone else, and pretty soon Vern’s got himself arrested so he can meet the toughest, baddest crook in the west, currently in jail waiting to be hung, goes by the dastardly name of Frenchy. Seems Frenchy (Mel Ferrer) knows a woman by the improbable name of Altar Keane. And Altar Keane? She runs the Chuck-a-Luck ranch.

Altar Keane is played by Marlene Dietrich. She is wonderful. In a flashback we encounter her singing a song in a saloon. She does it with a cigarette hanging out of her mouth, looking so bored and tired you fear she’ll fall asleep halfway through. It’s a little bit of genius. Later on, partying with the criminals holing up at Chuck-a-Luck, she sings this song. Enjoy:

Vern spots a brooch on Altar’s dress, the same one his beloved was wearing when she was killed. He knows the murderer is among the men at Chuck-a-Luck. Frenchy is Altar’s sweetheart. Was Frenchy the killer? Did he give her the brooch? We know he’s innocent, but Vern doesn’t. Worse yet, Altar and Vern start acting awful sweet on each other. Frenchy ain’t pleased. And to top it all off, Kinch thinks he recognizes Vern, but can’t quite place him.

Oh, there’s going to be trouble at the Chuck-a-Luck tonight, fellas. Mighty big trouble, you ask me.

Rancho Notorious is nothing if not entertaining. It is without a doubt much, much funnier than its makers intended. Is it good? An age-old question you must answer for yourself. You can think it over while watching: 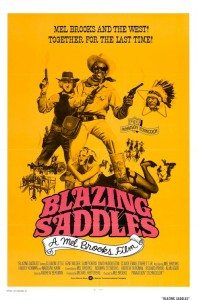 Blazing Saddles opens with a theme song that’s actually more serious than the one that opens Rancho Notorious. Mel Brooks put an ad out looking for a “Frankie Laine type sound,” and who should turn up but Frankie Laine himself. Apparently Brooks never had the heart to tell Laine the song was for a comedy. He added in the bullwhip cracks later.

Might be you’ve seen Blazing Saddles. Many have. Might be it’s time to watch it again, immediately following Rancho Notorious. It’ll make more sense that way.

As it stands, Blazing Saddles neither makes any sense nor does it need to. Once a movie reaches this level of funny, nothing else matters. It was famously co-written by Richard Pryor, who was originally supposed to play Bart, the sheriff, until the studio refused, thinking him, to put it kindly, mentally unstable. A shame, because he’s Richard Pryor, he’d have been great, but Cleavon Little does such a grand job it hardly matters. 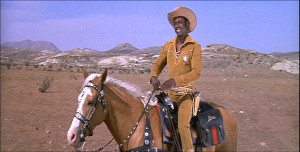 The best dressed sheriff in the west

The plot, what little there is, involves the need for a railroad to go through the town of Rock Ridge. The attorney general, Hedy—er, Hedley Lamarr (Harvery Korman at his obsequious, scheming best), plots with the dimwitted Taggart (Slim Pickens, in what is seriously an Oscar-worthy performance) to scare the townspeople away that he may more easily steal their land. They send the town a new sheriff—a black sheriff, Bart, assuming they’ll lynch him. Which will make it easier to run them off? Okay, sure!

That’s about it. Bart comes to town and meets The Waco Kid (Gene Wilder), a drunk ex-gunfighter and all around nice guy. Hilarity ensues.

Brooks was never a stylish filmmaker. He directs with all the grace of a tank. He likes anachronistic jokes, as broad as the sides of barns. In later movies his notions of comedy work less and less effectively. In Blazing Saddles, everything works perfectly, because everything is funny. Even the bizarre ending, with the cast crashing into other movie sets before ending up at the Chinese Theater on Hollywood Blvd., works. It has nothing to do with anything that precedes it, but so what? How else do you end a movie that makes no sense? 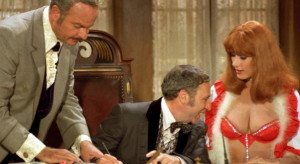 The director at work

It was written by a bunch of funny guys (including Andrew Bergman, whose original script was its basis) trying to one up each other. And it had another intent, too, to lampoon racism. Brooks does not shy away from using “nigger” liberally throughout, something he’s pointed out would be far harder to do today. Times were different in the ‘70s. Consciousness of racism was at a high. Culturally, there was no better time to mock it, and to do so with an element very unusual for its time—a black leading man as the hero.

Blazing Saddles is surprising in how well it holds up. It’s utterly ridiculous—with a point. A rare thing in any comedy.

No ruse was ever so clever as this