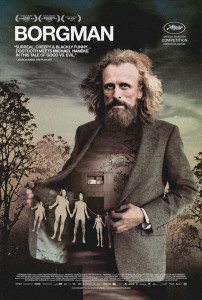 It begins near a forest. A man with a dog, a man with an eight foot long, sharpened metal spike, and a priest with a shotgun march stony-faced into the woods to roust a man living in a hovel beneath the forest floor. Bearded and bedraggled, this is Borgman. He makes his escape as the three men smash open his hideout. As he flees, he awakens two other men sleeping underground, and tells them they’ve been discovered.

Is Borgman a man? A faerie? A nimble forest sprite? A demon? Whatever he is, he’s going to be trouble. You don’t want to mess with Borgman. You want to stick an eight foot spike through him.

Kill him while you can, boys

Borgman is set primarily in and around a sleek, modernist Dutch house, in which lives a young, wealthy couple, Richard and Marina, their three little children, and their nanny. Borgman knocks on their door and asks if he can take a bath. Richard, a man on a short fuse, beats the hell out of him when he claims to know Marina. 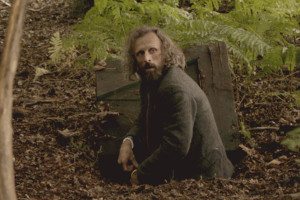 The Borgman emerges from its lair

Later, ashamed and guilty, Marina finds Borgman cowering in their garage. She lets him spend the night in their guest house. The next day Borgman insists on staying longer. He’s a little weird and rude about it. But he was beat up pretty bad, so she relents. During the night, Borgman creeps around their house, tells a scary monster story to the children, and is seen squatting naked over the sleeping Marina while she dreams of Richard beating her. Is Borgman influencing her dreams?

The next day, Marina spots Borgman packed up and leaving the guest house. She stops him and asks him to stay. He says sorry, but he wants to play. Perhaps he could stay in another capacity? As the gardener? Borgman intimates that this will necessitate something untoward happening to the current gardener. That’s fine with Marina. 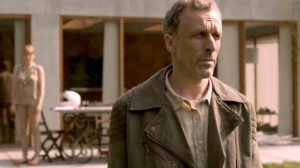 Borgman returns as the gardener, all cleaned up

Which is to say, Marina asks the demon to stay. He doesn’t push himself on her. She invites inside her own destruction. What the movie ultimately suggests is that she yearns to be destroyed along with her world of unearned privilege.

Borgman reminded me of other recent European movies dealing with the dark underside of modern, well-to-do families, namely Dogtooth, by Greek director Yorgis Lanthimos, and Michael Haneke’s Funny Games and Caché. In all of these movies, modern, wealthy, western families disintegrate from within. None explains why. The disintegration appears inevitable, a necessary result of our current state of existence. 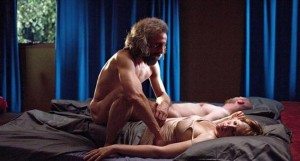 Time for a nightmare

Borgman grows stranger and stranger as it continues. The performances, especially Jan Bijvoet as Borgman and Hadewych Minis as Marina, are intensely realized, but everyone in the movie seems to exist just slightly out of step with reality. Emotions run high, but seem to be the wrong emotions. It’s hard to feel for these characters. This may or may not be by design. The intent of Borgman’s writer/director Alex van Warmerdam is kept entirely opaque. What keeps one fascinated is seeing what happens next. Until the very end, I had no clue what was coming. To the movie’s credit, what does wind up happening feels inevitable. The final image is straight out of the Brothers Grimm. 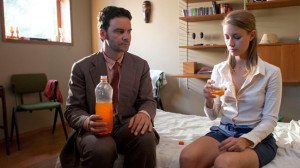 I think I liked Borgman. When it ended, at first I felt a bit let down. I never connected emotionally with anyone in it, and its intentional obscurity left me somewhat unsatisfied. But I think the idea behind Borgman was to use  elements of classic fables in a modern setting. The characters in fables are purposely unreal. They are archetypes. We don’t have to connect emotionally with them. A fable is a story whose meaning we must decide for ourselves.

I’m not sure I know the meaning of Borgman, but I feel like meaning is there. Not in a way where one is supposed to “figure it out,” but in a way that will remain unformed, swimming just out of view in the depths of one’s unconscious.