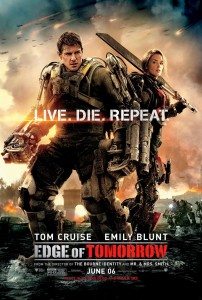 I’m surprised it’s taken this long for someone to steal Groundhog Day’s conceit of a man reliving the same day over and over again until he gets it “right.” Which I put in quotes because in Groundhog Day, “right” is shown to be a highly subjective concept. It’s about one man’s inner journey.

The Edge of Tomorrow is very much about one man’s outer journey, which journey, much to my surprise, makes for (mostly) a damn good movie. So: wow. The Edge of Tomorrow is a terrible name. The trailer, if you had the misfortune to see it, could not be less appealing. Why didn’t the studio advertise a fun, even funny, science fiction movie? Why did they make it resemble a run-of-the-mill, crappy sci-fi war flick? No one on earth liked the last Tom Cruise sci-fi flick, Oblivion. You’d think they’d want to show up what a different kind of movie this is. 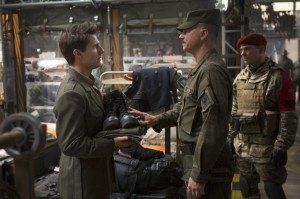 Game over, man. I mean, no, game is now beginning, man.

The Edge of Tomorrow opens with news footage explaining earth’s dire situation: aliens landed five years ago in Germany and have since spread out over all of Europe, killing hundreds of millions. Major William Cage (Tom Cruise) is a grinning TV talking-head whose job is making the army sound good. His new assignment: make the coming invasion of France—Operation Downfall (uh oh)—look inspiring. Only the general in charge (Brendan Gleeson) assigns Cage to land with the troops on the beach. Cage ain’t keen on fighting. He attempts to blackmail the general and gets himself tasered for his efforts. He wakes up at Heathrow, the take-off point for he invasion, busted down to a private.

Master Sergeant Farrell (Bill Paxton) tells him he’s in the first wave in the morning. And so it begins.

The attack in the morning is a disaster. The aliens, called Mimics, seem to know exactly what the army has planned. Speaking of whom, the aliens in this movie are awesome. How many summer action blockbusters have we sat through in how many years in which the aliens all look the same? With CGI, anything imaginable may be animated, yet we get the same tired ideas over and over again.

The Mimics are the coolest movie monsters in ages. They look sincerely, impossibly alien. They don’t make sense, they’re so alien. They’re scary and bizarre and unknowable. If this movie is remembered for nothing else, it should be remembered for the aliens. This is how it’s done, people. Take note. 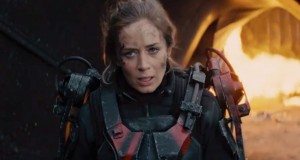 You’re going to want to take one step to the–oh, hell.

The soldiers die horribly on the beach. The Mimics are unstoppable. Cage stumbles around a bit, falls on his ass, and blows himself and an attacking Mimic to pieces. Its goopy blood eats away his face. But not before he sees bad-ass hero Rita Vrataski, AKA the Angel of Verdun (Emily Blunt), die horribly right before his eyes.

Of course Rita had the same thing happen to her at the famed Battle of Verdun (poor, long-suffering Verdun). I’ll leave you with some mystery regarding the how and the why, but it’s happening, and the Mimics are to blame. Like a video game, Cage has to learn from his mistakes and try and try again to get across the beachhead and find a way to destroy the Mimics. 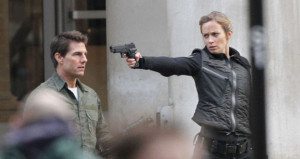 Another day, another bullet in the head

This is surely the best video game movie ever made, though it’s not based on a video game (it comes from a Japanese book, All You Need Is Kill, by Hiroshi Sakurazaka) . It’s video game logic in action. What keeps it interesting is its pacing and its humor. Credit the many, many writers (the three credited are Christopher McQuarrie and Jez and John-Henry Butterworth, but a lot of people had their fingers in this one) and director Doug Liman for giving what could have been plodding and grim a light touch with a lot of humor. Montages of Cage’s many ways of dying and of Rita shooting Cage in the head every time he screws up in training are, believe it or not, funny.

Also funny is Bill Paxton, channeling a certain vibe from his long-ago Aliens character (which movie would be a perfect double bill with Edge of Tomorrow). 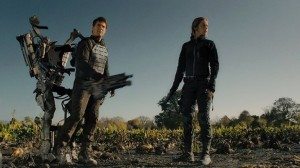 Nothing will kill us here–oh, rats.

Tom Cruise shows that this is the kind of movie he’s made for. He starts out weaselly and pathetic and learns to be a man by the end. There’s little in the way of psychological exploration in here, which I suppose the movie could be faulted for, but it just doesn’t have the time for it. One might think that living the same day hundreds if not thousands of times, a day spent first training for and then battling deadly aliens, a day where your one friend, a woman you might be falling for, dies every time through, would have a certain negative psychological impact. But no, this is not that movie.

Emily Blunt is excellent as the war hero. She imbues Rita with a depth of sadness. She’s seen horrible things, hundreds of times over, and it’s taken a toll. It’s a nice change to see a female character as the hardened vet and the male one as the inept fool she has to toughen up. 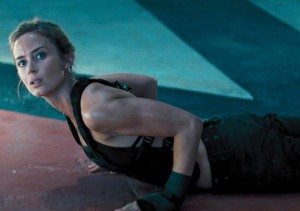 Going back to the many, many writers, the problem with the script (or so I have read) was always its ending, and none of them solved it. The final section of the movie is a bit weak, and worst of all is the ending, so cheap and predictable you want to tear your hair out. Worst of all, it makes zero logical sense. In a typical crappy action movie, it’s the cheap ending I’d expect, but in here? In a good movie? It reeks of studio fear. Too bad.

A few other flaws in logic crop up, only one of which is glaring, and for that, frustrating. It’s a bit too spoilery to explain here, but if you see the movie, I’ll go into it in the comments.

So. Yes. The Edge of Tomorrow, the bland-looking new Tom Cruise sci-fi action movie, is worth your time and money, far more than any other blockbuster yet to come out this summer. If you’re only going to see one, this is it. Who would have thought?

15 responses on “The Edge of Tomorrow One Word Review: Wow”