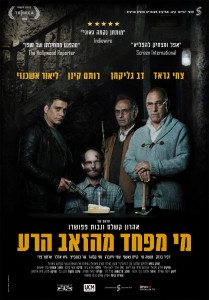 A sexual predator does unspeakable things to little girls, so I suppose you might as well prepare yourself to hear those things described in lingering detail, watch the accused culprit tortured at length, and maybe laugh a little, too, all while watching the Israeli thriller Big Bad Wolves.

Another option, however, would be to not watch the film. It is this option that I recommend — not because the film is horrible, but because you should have more constructive uses of your time.

Although, yes, the film is horrible in its subject matter.

Written and directed by Ahalon Keshales and Navot Papushado, Big Bad Wolves received a sizable publicity boost when torture-comedy connoisseur Quentin Tarantino called it the “best film of 2013.” I guess the Big Q-ball didn’t see Spring Breakers? Or John Dies at the End? Or Upstream Color? Or perhaps it was just that he was genuinely moved to see someone follow clumsily in his footsteps, long after those footsteps had filled in with seeping sewage.

If only there were a little dog I could use this on.

Big Bad Wolves sets up a broad-strokes situation that will be fascinating to anyone who needs psychiatric guidance. A young girl is kidnapped; her mutilated body is found by following — wait for it — a trail of neon-colored gummy worms. For reasons that are barely mentioned, a meek teacher, Dror (Rotem Keinan) is suspected by indelicate policeman Micki (Lior Ashkenazi) of the crime and others like it. His suspicions take physical form and a video of Micki brutalizing Dror hits the internet. Micki gets suspended and Dror loses his job. Gidi (Tzahi Grad), the father of the latest victim, abducts Dror in pursuit of his daughter’s missing head and brings him and Micki to a remote house for some light discussion and bloodletting.

This is either a nice cake or an evil cake.

From there, either you know exactly what will happen or it is my pleasure to welcome you to modern society. To your left you will find a strange box we call the ‘television.’ To your right is a ceramic bowl in which you can place your bodily wastes. In front of you, those bright orange curls are known as ‘food.’

Big Bad Wolves has some comic moments, and that’s the problem. The dreadful tale — about sexual predation and exuberant torture — never lifts its head above the confines of its basement lair. Despite taking place in Israel, no commentary is implied or offered on the relationship between what its characters suffer and do and the particular politics of its setting. 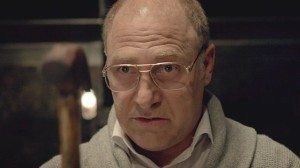 If I had a hammer, I’d hammer in my mourning.

The lack of substance in the film is extreme. It may be shot crisply, but if you look for any insight into how violence might affect children, you will find a void. The acting may be reasonable, but the characters have nothing of interest to say or do, unless you’re interested in watching fingers be broken. Gidi — as the strongest example — never says a word about his daughter, who was recently murdered, nor does Gidi’s father mention his brutalized granddaughter. He talks instead about soup.

Watching this soulless exercise in sadism, you will have little comprehension of time and space. Do the events all take place within the space of a few days or have months elapsed? Is Gidi’s remote home hours away or can one drive there and back in half an hour? Is Dror guilty or innocent?

It doesn’t matter. Dror’s culpability bears no relation to anything that happens in the world around us. Neither do Gidi and Micki’s application of pain in pursuit of justice. Big Bad Wolves is just an hour and a half of people being awful for your enjoyment.