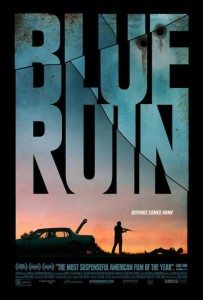 The question Blue Ruin brought to mind was something nebulous about what makes a movie “good.” Because, on the one hand, Blue Ruin is in many ways a very good movie. On the other, it’s not really about anything other than being a good movie. Which isn’t to say it’s like watching one of Tarantino’s movies, which exist as extended riffs on and references to the history of movies in lieu of reference to actual human experience. It’s not that. Blue Ruin, rather, is in every way stripped down. In a way, it references nothing at all. It has, barely, a theme—the actions of our parents set our course in life, however grim—but that a theme exists is irrelevant to one’s enjoyment of the movie. It has a style—simply stated realism—but this is in keeping with the movie’s stripped down nature. There is nothing flashy in Blue Ruin. There is nothing overdone. There is little dialogue. No character development. In short, what it left me wondering was, what’s the point?

Which to wonder what’s the point is unfair. This essay is going to be unfair, I’m afraid. Blue Ruin is fine, is what it is. It’s tense, it moves quickly, it’s well made in every respect. It entertains. The same could be said of many movies, some that I love. The thing is, Blue Ruin left me buffaloed (to used a word I’ve been hoping to use more often), and I’m not certain why, or indeed if I even have a right to be buffaloed by it. Blue Ruin might well deserve better.

But who said life is fair? 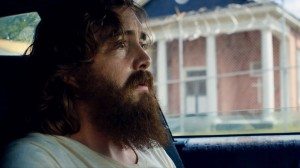 Dwight goes for a drive

The story, in a nutshell, would, even if described at length, fit inside a nutshell. There’s this dirty homeless bearded drifter type named Dwight (Macon Blair) who lives in his shitty blue car (the literal blue ruin of the title (though of course Dwight himself is likewise blue and ruined)) and eats food from dumpsters. A policewoman brings him news: the man who killed his parents 20 years earlier is being released from prison.

Dwight sets off to find him and kill him, which he does almost immediately. He cleans himself up and goes to see his sister (Amy Hargreaves), scared the family of the killer, the Clelands, will come for revenge. They do come for revenge. Dwight has to fight them. 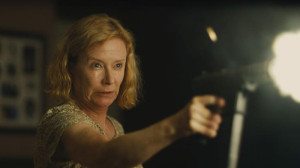 One of the Clelands you’d rather not meet

There’s the movie. What’s best about it, what makes it work, is that Dwight is nothing more than a meek, troubled guy who happens to have been nursing a mighty grudge for most of his ruined life. He’s no better at killing or navigating blood fueds than you or me. He’s just this guy, you know?

When he gets hurt, it hurts. This isn’t Commando. Every knife wound is a bastard, every arrow in the leg a trip to the hospital.

Jeremy Saulnier wrote, directed, and shot the movie, his second feature. Mostly he’s worked as a cinematographer, and it shows in Blue Ruin. It’s cleanly lensed, let’s say, with a compelling, though decidedly unshowy look. 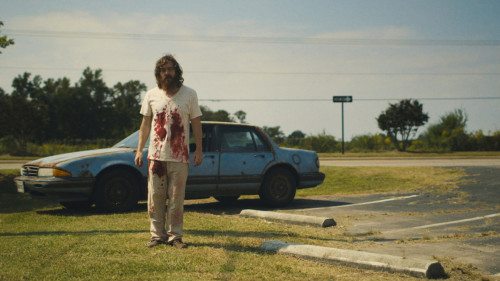 There’s some red on you, Dwight

So what’s my problem with it? Is it the ending? It might be the ending. There’s nothing surprising, nothing cathartic. It gets to where it’s going and goes about how you know it’s going to, and then it’s over. Which is fine. Put it like that, and that’s how a story should end. It should end how it has to end. No need for surprises. Only something else is going on in Blue Ruin, or rather, something else isn’t going on. Which I think that’s the crux. 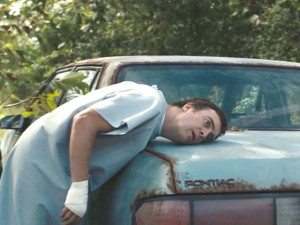 What do you got in the trunk, Dwight?

There’s a story. There’s a theme. And none of it adds up to anything. I didn’t feel anything for anyone in the movie, though I was curious to see what would become of them. There’s one affecting scene between brother and sister in a fast food restaurant where you really feel the lifetime of hurt they’ve suffered from having lost their parents. After that, nothing is especially affecting.

But does one have to feel something about a movie? Can’t one simply be entertained? I love Evil Dead II, and what the hell does that have to say about the human condition? It’s genius cinema, and genius cinema can be about anything at all, including laughing lamps and mooseheads. So is the thing about Blue Ruin that it’s entertaining, but only enough to get you through the movie?

Yes! I like the sound of that. It carries you through to the end, but just barely. By the final scene it flags, and then it’s over, and it’s like you can’t even remember it five minutes later. 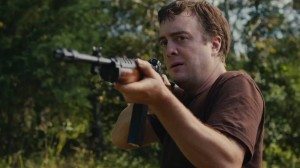 Not handy with a gun, but willing to use it

An example from earlier this year comes to mind: Borgman. Another story that’s compelling from start to finish that doesn’t seem to add up to much. Yet something more is going on in Borgman. It’s months later and still images linger. Writing this paragraph I find I’d like to watch it again.

I would not like to watch Blue Ruin again. It’s an excellent example of how to make a compelling, quality movie on a low budget. What else it is escapes me.

4 responses on “Blue Ruin: A Man, A Car, And Lots of Dead People”