The new Star Wars movie  will be called The Force Awakens. That is an appropriate title as it at least admits that the audience was asleep during the prequels. One thing the upcoming movies had better wake up is a sense of dread and respect for the bad guys.

The Empire did not only look cool being so bad. They also had the respect of the audience. From the opening shot of the star destroyer chasing Princess Leia’s ship, to the Endor Death Star blowing up Rebel Cruisers, there was always the dread that the Empire could win.

And beyond the technology, there were no shortage of Imperials who were damn good at their jobs. Obviously Darth Vader was a terrific Jack of All Imperial Trades. Need someone to attack a spy ship posing as a diplomatic mission to Alderaan? Call Vader. The new Death Star has fallen behind schedule? Send Vader in.

And he wasn’t afraid to roll up his sleeves, get in his own TIE Fighter and clear out the trench himself.

But Vader was not alone in doing his job well. I am not saying I rooted for the Imperials. Just that I admire them and I tip my X-Wing helmet to them. Much like how I grew up a Boston Celtics fan hating the Los Angeles Lakers but I could admire Kareem Abdul-Jabbar and Magic Johnson and James Worthy. I hated when they won, but I knew greatness when I saw it.

So who in the Empire deserve our grudging praise? Let me count them down. 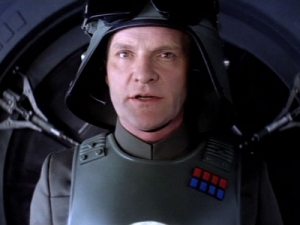 To show how good General Veers was at his job, I need to ask you a trio of trivial questions:

That would be Luke Skywalker blowing up the Death Star.

That would be Lando Calrissian taking out the Endor Death Star’s main reactor.

That would be General Veers. His walker made it past the rebel guns, snowspeeders, and Luke’s grabbling hook and took out the main reactor, giving the Empire the victory.

He won the freaking battle and what was his thanks? His Star Wars figure was simply called AT-AT Commander. Come on Kenner! He deserved more credit than that!

(Note that Veers was played by Julian Glover who played Walter Donovan, the Belloq wanna-be in Indiana Jones and the Last Crusade. So at least in the LucasFilm world, he got a promotion.) 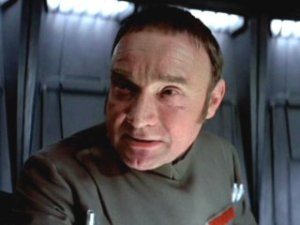 In the Death Star conference room scene, every Imperial seemed to be pretty cocky. Tarkin is riding high with news of the Senate being dissolved and more power thrown his way. Motti, who evidently built the Death Star, thinks it is the ultimate power in the universe and talks smack to Vader.

And of course Vader feels that a board room meeting is the ideal place to choke a subordinate.

Meanwhile it is Taggi who is basically the Cassandra of this bunch. He looks like a worry wort, complaining that the Rebels are well equipped, they are dangerous and that they could find a weakness in the Death Star.

Everyone pooh-poohs him, but he turns out to be 100% correct in everything he says. I really hope he survived the Death Star blowing up. He could have had the ultimate “I told you so” moment. 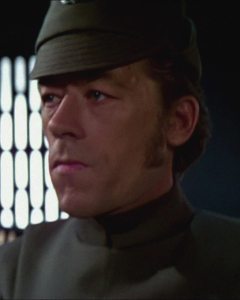 In the middle of the Death Star battle, Bast approached Tarkin to tell them they “have analyzed their attack and there is a danger.” Then he offers to have Tarkin’s ship standing by. Tarkin, of course, brushes him off and remained on the Death Star when it blew up.

I can’t help but wonder about the scene right before and after this exchange.

Bast and his men were checking out the Y-Wings flying through the Trench, wondering “What the hell are they doing?”

And someone must have looked closer at the trench and said “Oh crap. Chief Bast. Remember that small thermal exhaust port?”

“You mean the one right below the main port?”

“Yeah. Guess what it leads to!”

After soiling his pants, Bast came up to Tarkin who said he was “overestimating their chances.”

Right after that scene, I am guessing Bast ran to Tarkin’s shuttle yelling “Start the engine! Let’s get out of here.”

You will note that Bast appears briefly in The Star Wars Holiday Special, which means he survived the Death Star explosion. (And yes, I include The Holiday Special as canon.) 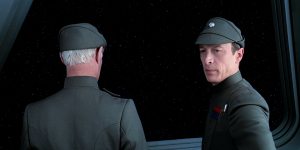 Captain Needa gets a lot of crap because he lost the Millennium Falcon and got choked to death by Darth Vader, who threw a cold but funny “Apology accepted, Captain Needa” to the dead body.

But let’s look at how he did with some objectivity.

First of all, he found the Falcon leaving the asteroid belt. That must not have been an easy feat. Evidently that was hard enough to do that Vader needed to hire Bounty Hunters to do it.

Secondly, his Star Destroyer pounded the Falcon to the point where Han Solo needed to do some unorthodox moves to evade capture.

Thirdly, he knew right away that something was up, even noting that a cloaking device was out of the question.

Fourthly, and most importantly, he took full responsibility. Captain Needa did not back down from Darth Vader. He did not blame anyone else. He did not even ask for sympathy, even though everyone on the bridge knew he was toast. He even gave a final order, as if he was coming back.

I know if I were in Needa’s boots, when I was told Vader was on the line demanding an update, I’d either bluff like hell or say “tell him I’m not here!”

Accountability goes a long way in my book. 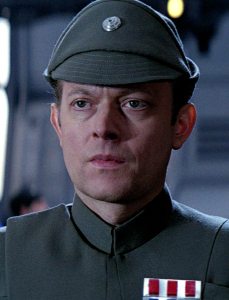 The second Death Star’s operating officer did not have an enviable job. First of all he was understaffed. Then he got word that Darth Vader was showing up, inevitably pissed. We even got to see him super nervous as Vader’s shuttle opened up.

His interchange with Vader showed that Jerrjerodd would try to do anything to make a bad situation good. And he did so with guts, dedication, and eventually a strategic retreat. Let’s break it down.

First tactic: Kiss Vader’s ass, which is never a bad idea. Calling the arrival of Darth Vader “an unexpected pleasure” is a HUGE pile of bullshit, but worth a try. That didn’t work so on to…

Second tactic: Defend his men’s work. Jerrjerodd had their backs and I hope they appreciated that. Telling a pissed off Vader that his men were working as fast as they can took some serious stones. That didn’t work so on to…

Third tactic: Double down! He stuck a flag in the sand and said the station was going to opened as planned. Vader wasn’t buying, so time to show some REAL onions with…

Fourth tactic: Complain! Seriously, he filed a complaint with Darth F—ing Vader as if they were equals in the office. The Emperor asked the impossible? He needs more men? Folks, that is a gutsy move. But finally he had to give in with…

Fifth and Final tactic: Giving up. Knowing the Emperor was showing up, he read the room perfectly. He had no choice but to double the efforts and work faster. His neck was literally on the line.

Also to his credit are two more things. The Death Star WAS operational by the time the Rebels arrived (and Jerjerrodd was commanding the main canon.) And in a deleted scene, the Emperor ordered Jerjerrodd to blow up the forest moon when the shield generator was destroyed. Jerjerrodd was reluctant to do so because of the Imperial troops still on the moon. He questioned the Emperor out of loyalty to his men? I don’t care how much you love the Rebels, you’ve GOT to admire that! 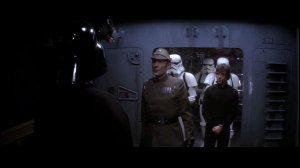 THE IMPERIAL COMMANDER ON THE ENDOR WALKER

When Luke surrendered to the Empire off-screen, he was brought to Vader by way of a full-sized walker. I am guessing Luke was snickering on the way thinking “I could take this out with a cable gun, a light saber and a bomb.”

When Luke and his light saber were handed over, the Commander told Vader that Luke denied there were any other Rebels on Endor but he wasn’t buying it and wanted to keep looking.

You would think that Luke would have used that opportunity to pull a Jedi mind trick on the commander. If he did, it didn’t work. Even Vader said “Good work” to him. Trust me, getting a Gold Star from Vader was no easy trick. Just ask Captain Needa. 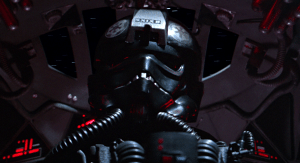 THE TWO TIE INTERCEPTOR PILOTS IN THE DEATH STAR CORE

A whole bunch of TIE Fighters chased the rebel pilots into the core. And later a whole bunch left the core, chasing the A-Wing and Y-Wing back to the surface.

But 2 TIE Interceptors thought “F— that! Follow the two into the reactor core.” They kept their eyes on the ball and were not distracted. Ultimately they both tried to get out of there, but one blew up when the reactor tipped over. The other tried to escape but was engulfed by the Death Star fireball. For fair play, he probably should have escaped and been captured. That pilot deserved better. 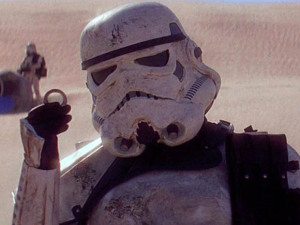 When the Sand Troopers were looking around the escape pod, their simple mission became a galactic pain in the ass. They were supposed to just get the tapes in the pod, go back up to the Star Destroyer and call it a war.

Instead it was a WTF moment of finding a pod without life forms but with tracks heading away. Now, I am sure that with a little bit of reflection, they all would have figured out the pod’s passengers were droids, but kudos to this trooper for finding that little piece of metal from C-3PO. I can’t imagine it was easy to spot.

Remember, these troopers were not natives of Tatooine. I am guessing they did not expect to do much ground work on the planet when they took out Princess Leia’s ship — but one trooper did enough research on local fauna to know to pick up Gaffi Sticks and rent a Bantha or two to make the attack on the Jawas look a lot less like an Imperial attack.

Granted, they didn’t ride the Bantha’s single file, so it was just a B+ effort…

Wait, you might be saying. Where is Admiral Piett? Where is Grand Moff Tarkin? Ahhh… those two are in a later installment, “Star Wars Characters Who Were Bad Leaders.”