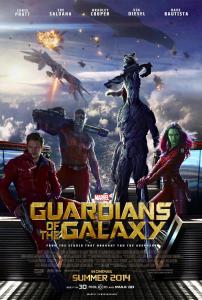 This is what made a bazillion dollars? Seriously? I admit to not being much of a fan of the Marvel Machine, but Guardians of The Galaxy makes Thor 2 look like Lawrence of Arabia. Watching Guardians is like being beaten over the head with a wet llama for two hours straight.

I give it this: it’s got a few chuckles. It has exactly nothing else.

I can’t quite believe how poorly structured it is. I mean fine, you want to make a simple chase movie, go ahead. Like The Chase. That was simple. But even a chase movie has structure. Guardians is nothing more than a series of overly long, incomprehensible action sequences interrupted by overly long scenes of one character saying, “Come on, you guys! We have to do this! We have to! Right? Yeah? Okay? Cool!” followed by another action sequence.

There’s literally a scene where one of the Guardians phones the bad guy and tells him to get down there so they can fight him. Note to screenwriters: if the only way you can get your bad guy in the same scene with your good guy is to have the good guy phone him up and invite him over, you’re doing it wrong. 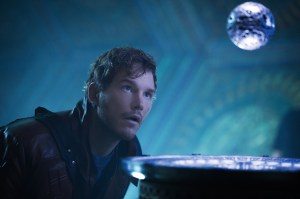 The more these matters are explained, the less they make sense.

The object of interest is a metal orb containing an infinity stone, which is so powerful that if you grab it, you will die! Unless, mind you, you’re one of the people who can grab it and not die. You might also have the power to grab it, not die, and stick it on your magic hammer. Who gets to do which is not explained, despite the movie consisting of nothing but long-winded explanations. 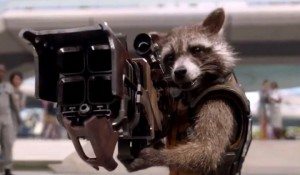 The movie opens with our hero, Peter Quill, AKA Star Lord, on a dead planet seeking out the orb. Turns out some other guys are there looking for it too, bad guys working for the evil Ronan. Why did they happen to arrive on this long dead world at exactly the same second? I don’t know. Writer/director James Gunn doesn’t either. I guess because it’s exciting? Why didn’t ultimate baddy Thanos go after it ages ago? Why now? And how did some antique dealer know where it was and know to send Star Lord after it? And why didn’t he know Thanos or Ronan wanted it? The dealer must have known it was an infinity stone, or why else be after it? Only once he hears Ronan wants it, he turns it down! If it’s an infinity stone, why wouldn’t he know that every evil-doer in the universe is lusting after it?

And if in the end it’s given to the rulers of the dealer’s very own planet, why didn’t he just take the orb and hand it over to them in the first place? 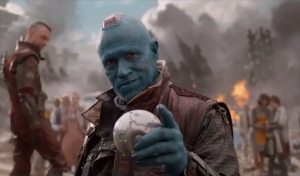 It feels like the script was written in a day. In the pre-credits opening, little Peter Quill sees his mother die. She gives him a present. Moments later, he’s abducted by space pirates. At the end of the movie we learn that the pirates grabbed him at the behest of his alien father, identity unknown.

But back to the present. We see mom’s present on Star Lord’s ship later on—still wrapped. Why? He’s kept it for twenty years unopened? The last gift from his dead mother? For what possible reason? None is given. Only at the very end of the movie does he open it to reveal—another mix tape! Aww, heck. Ain’t that sweet? Well. It might be if there was any reason for his delay aside from screenwriter convenience. “Hey, it’s the end of the movie and we need an emotional stinger; better open that present!” is not a reason grounded in story or character. It’s one grounded in lazy writing. 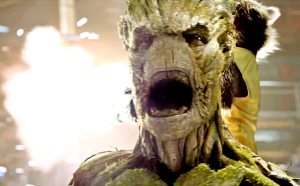 I know. It’s a comic book movie. It’s not supposed to be grounded in character, have a sensible story, or be anything other than wet CGI llamas exploding in rainbow colors. But why not? And why do the nerds of the webosphere insist otherwise? I can’t count the number of reviews praising this movie and its characters and its story. I kid you not, there are people calling this the Ghostbusters of the twenty-teens. Ghostbusters. Remember Ghostbusters? The movie with characters, plot, pacing, originality, story-based comedy, and Bill fucking Murray? I didn’t think so.

The raccoon and the tree are cute and all, but they’re as poorly characterized as everyone else. They all have one note to play, and they play it, scene after scene.

Which it’s a comedy, so that’s fine, but a comedy needs to be a lot funnier than Guardians to get away with paper thin characters and lack of story. More than anything, Guardians feels like what we all know it is: a stepping stone in a larger tale, one consisting of nothing but other stepping stones. These Marvel movies are clever, that’s for sure. They’re none of them very good on their own, but to make sense of the whole grand story (which by design will never end), you have to see every one of them. 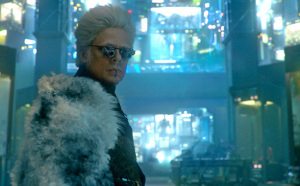 And what’s the deal with The Collector (Benicio del Toro)? He was ominous and cool in the post-credit scene of whatever that other Marvel movie was, and here our heroes visit his groovy pad only to blow it up and leave him. Why is this scene in the movie? Why is this character in the movie? He has nothing to do with anything. Why cut back to him in the post-credit scene? Just to see Howard The Duck? Is Howard going to be one of the Avengers soon? Is the Collector going to get to do anything, ever? Or just show up for one scene a movie to do nothing? I hope del Toro is soaking them for a mint. He deserves better.

The look of the movie couldn’t be more bland. I kept reading how brilliantly the different worlds were realized. I don’t understand it. Do people’s brains shut off when they see the words Marvel Studios? The worst elements of the movie are the ones praised as the most exceptional. Guardians of The Galaxy is an appalling dud. And you know what? Even the mix tape sucks.

In short: I’ve had it with you damn kids! Get the hell off my lawn! 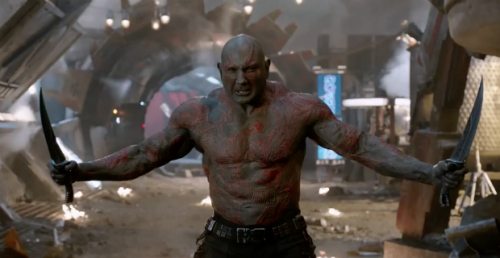 11 responses on “The Guardians of The Galaxy: My Exceptionally Late And Outrageously Negative Review”