After hitting a creative brick wall in series 7 and, to put it nicely, really stinking up the joint, I figured Steven Moffat would hand the keys to the Doctor Who kingdom to someone new. Instead he doubled down, as if to say, “You think the back half of series 6 fell apart? You think series 7 was the worst of the modern Doctor Who? Oh, ye of little faith! I have so much lower to sink! Join me on my journey to series 8, the worst series of them all!” 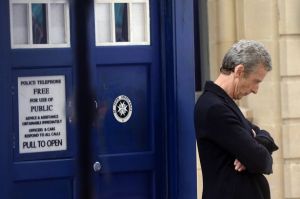 The grumpy Doctor grumps about

After a dismal opening episode in “Deep Breath,” I was worried, but hopeful. When “Into The Dalek” didn’t improve things, I gave up writing reviews. Who wants to review crappy shows? But I kept watching. After seven series, they’ve got me hooked. I can’t look away. I still can’t. I know I’ll come crawling back for the xmas special.

Later in the season a few episodes showed some spark. “Kill The Moon,” Mummy On The Orient Express,” and “Flatline” each have some nice ideas, and gave Peter Capaldi at least a little more to do than stand around, petulant and angry. And yet…none of those episodes, when compared to the best the show has had to offer, comes anywhere close.

With the final two-fer, “Dark Water” and “Death In Heaven,” Moffat makes clear what he’s been working toward: a meditation on the Doctor’s method of using others to do his will, often by lying to them, all for the good of the greatest number of people (and other beings), while, with seeming callousness, allowing various individuals to die or otherwise suffer.

These two episodes are, in a word, awful. Just awful. Watching them was as fun as being hit in the face with a two-by-four for an hour and a half, and considerably less subtle. And for what purpose? To explain the above re: the Doctor’s methods? But—but—that’s who the Doctor is! That’s the very definition of his character. And Moffat creates an entire series of the show—eight series in—to tell us that? Who does he think is watching this show?

“Deep Breath” turns out to be a wonderful microcosm of Moffat’s insanity. At dismal length, the entire episode exists to make the argument that just because the Doctor has a new face, he’s the same man, and we should by gosh give him a chance. This despite all 197 series of Doctor Who, new and old, being constructed around this very principle: that the Doctor will change—and that we’ll like it when he does. No matter how attached one is to a particular Doctor, everyone’s excited to see a new one. It’s the engine that drives the show. It’s why it’s been on since the nineteen fucking sixties. In terms of the modern version, the beginning of series 2 does a fine job explicating how this works. Why spend a whole episode arguing for the very thing we watch the show for? It’s madness. 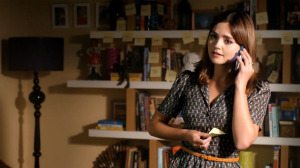 Looking at series 8 as a whole, Moffat’s doing the same thing. It doesn’t take many episodes of Christopher Eccleston as the Doctor to understand who and what the Doctor is: an alien in love with the universe who must make hard, unsentimental decisions to keep the place running, who struggles with the unfathmable emotional pain of having had to destroy his own civilization to do so.

That’s some heavy shit. He destroyed the Gallifreyans so their war with the Daleks wouldn’t consume the universe entire. And now he’s alone, traveling the universe, doing what he can to help. Which requires making terrible decisions regularly.

In short–THAT’S THE THEME OF THE SHOW.

Right? That’s why we’re watching. That’s why it’s compelling. Yet with series 8, Moffat spends twelve hours arguing that this is who the Doctor is. I can barely wrap my had around it. Twelve hours to make the argument that the Doctor is the Doctor? That’s your story? 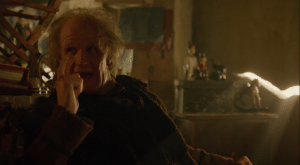 Oh drat. Someone stole my reason for being.

Which brings us to the single worst thing Moffat did to Doctor Who, back in series 7, when he revealed that in fact the Doctor didn’t kill all of Gallifrey—he actually sent them into another dimension. Sad, yes, that he can’t join them (not yet—does anyone doubt at this point where Moffat is heading?), but great news! Everyone’s alive and well!

And thus, the self-inflicted tragedy at the core of the Doctor’s character—having wiped out his own species for the greater good—is eliminated. Brilliant move.

Is series 8 the necessary result of this foolish decision? Did Moffat, having negated the Doctor’s emotional core, feel he needed to rebuild the Doctor in some way? To remake him into the person he always was? I haven’t the slightest idea.

Let’s talk character. Capaldi’s Doctor is the worst of the moderns, not because of Capaldi—he’s a great actor, he looks the part, seems like a perfect choice—but because he’s been completely retooled characterwise. He’s not the same man Eccleston, Tennant, and Smith played. Capaldi’s Doctor is mean-spirited, lacking wonder, hateful of everyone he meets, petulant, irritable, and boring. The other actors played the Doctor uniquely. But each held on to the core elements of the character. The Doctor is filled with wonder. Everything excites him. He is, above all, fun to be with. And when he shows his angry, possibly insane side? He’s scary, sure, but he couldn’t be more compelling. As he must be. Why else would anyone—i.e. companions and we the viewers—want to travel with him? 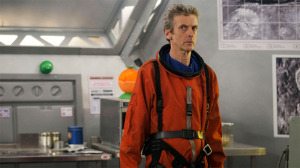 Yes. I will kill your moon. And your TV show.

What does he even do in series 8? He doesn’t want to do anything. Ever. He’s the first grudging Doctor. And maybe there’s a way to make that work. Maybe a Doctor hateful of his place in the universe could be made engaging. But Moffat doesn’t even come close. Because the Doctor’s lack of wonder, his anger at being who he is, isn’t the theme.

The serieslong hatred of the military doesn’t work. Moffat just shoves it down our throats to make his big point at the end with the Doctor being elected Earth President Commander In Chief, and finally being offered an army of Cybermen.

Seriously? Gee, I wonder if the Doctor—who’s like the evil Master/Mistress! Two side of the same coin! Batman and the Joker! Indy and Belloq!—is going to commandeer an army of Cybermen? Oh, what’s that? He’s not? Color me surprised. What a profound point has been made. 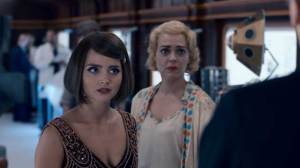 You in the back–please die informatively.

The profound point that the Doctor, to effect what he sees as acts conducive to the health of the universe, uses others, sometimes in ways that suggest he’s trying to keep his hands clean.

Why would he do that? Might it be because, wielding such power, he takes every step possible not to abuse it? However morally dodgy such actions might appear under close scrutiny? Again, isn’t this the very definition of his character?

For the most part, the Doctor in series 8 is the annoying whiner to Clara’s perky optimist. Clara’s series arc has something to do with learning to behave like the Doctor behaves. If someone finds this remotely interesting, maybe they’ll explain why.

The problem with Clara is neatly summed up in a scene from “Death In Heaven.” The alleged love of her life, Danny Pink, whom she’s treated like dirt since she met him, dies. In her apartment, surrounded by flowers, she tries to get the Doctor on the phone. An old woman enters the kitchen and tries to console her. 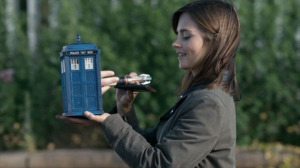 You be the Doctor now

And who is the old woman? Who knows? Clara has no family. She has no friends. I’m sure I’m forgetting the details, but she was introduced as a sort of magical spacebeing whose existence was tied to aiding every iteration of the Doctor. She was to fulfill her purpose by saving Matt Smith’s Doctor’s life and dying in the process, only hey presto, Smith saves her, and we’ve been stuck with ever since.

Who is she? What is she? Moffat never bothers to explain. She’s just—the companion. She gets a job teaching at a school. She meets Danny. She’s torn between him and the Doctor and, I’m sorry, why am I supposed to care?

Clara is a non-character, and insanely, she’s the focus of series 8. 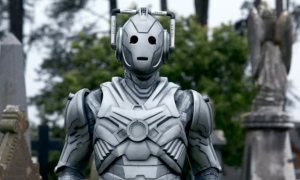 We love you, good Cyberman!

“Death In Heaven” is the worst episode of the series. Nothing about it is believeable or interesting. The pacing is glacial. There is no emotional core because it’s all heavy-handed thematic exposition. Moffat wants to tie Clara and the Doctor together, to make them two faces of the same person, and this he does with excrutiating literalness. Not even Russell T Davies’s lunatic, everything-but-the-kitchen-sink episodes at the end of series 4 had a scene as bad as the one in the cemetery with Cyberpink and Mistress and who’s going to shoot who, and the final absurdity, another Cyberman, the old dead general, showing up, deus ex machina style, to relieve anyone of making a real decision. It’s embarrassing.

The modern Doctor Who used to contain greatness, a greatness Moffat is in part responsible for. That he’s run it into the ground with such abandon is depressing.

Even more depressing? I’m going to keep watching, and hoping it gets better. It can’t get worse. Can it? I mean after the xmas special, when we must presume Clara gets the boot, series 9, with a new companion, even with Moffat clutching tight the reins, will mark a grand improvement? Please?

4 responses on “Doctor Who Series 8 Comes, Mercifully, To An End”