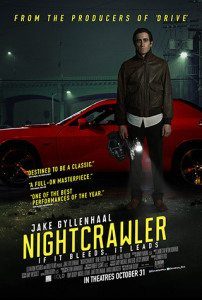 Jake Gyllenhaal plays Bloom with a kind of cheerful self-help guru vibe. He spouts business advice he reads on the internet and soon one wonders if his knowledge of humans and their behavior in general was likewise gleaned from late night web surfing. He’s a bit like an alien. An evil one. Gyllenhaal lost twenty pounds for the role. He’s not creepy thin. It’s just that he’s a bit too thin, his face a bit too gaunt, the circles under his too white eyes a bit to dark. Turns out he’s a sociopath. A very driven sociopath. 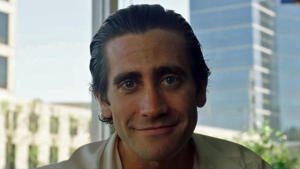 What a nice looking man

Bloom’s got a problem. He hasn’t found his calling. Selling scrap isn’t a living. He wants a job. But what kind? Driving one night he stops at the sight of two cops hauling a woman out of her burning, crashed car. Moments later, a van pulls up and out comes Joe (Bill Paxton), a so-called “nightcrawler,” i.e. a private videographer who films accidents, fires, crimes, etc., and sells his work to local news stations. Lou’s eyes grow wider still. His calling has arrived.

He buys a camera and a police scanner, films his first shooting victim, and sells it to Nina (Rene Russo), news director of a bottom-dwelling L.A. news station. She explains the kind of things they’re looking for: accidents, fires, and poor-on-rich crime. In short, she says, imagine “a screaming woman running down the street with her throat slit.”

Bloom endeavors to find her the kind of footage she wants, and to beat the competition in getting it. 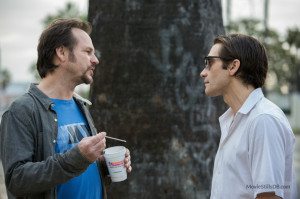 Advice from an old pro

That’s all the plot you need. Nightcrawler is a kind of horror movie. It’s tense and evil and you know it’s going to keep getting worse. It’s also darkly hilarious. Its humor couldn’t be much darker. It skewers TV news with ease, which yes, it’s an easy target, but the movie is so entertaining it hardly matters that its satirical target is easy to hit. It’s not what you hit, it’s how you hit it. You want a genius take on TV news, watch Network. Nightcrawler is a simpler movie, but what it does it does expertly.

It’s written and directed by Dan Gilroy, his first outing as a director, after having co-written, over the years, movies like The Bourne Legacy (with his writer/director brother, Tony Gilroy), The Fall, and everybody’s favorite Mick Jagger sci-fi flick, Freejack. It’s a beautifully streamlined script. There’s no excess, no side plots, no romantic entanglements, nothing. Yes, Bloom starts a relationship with Nina, but that’s all we see—how he starts it. We don’t need to see them together. 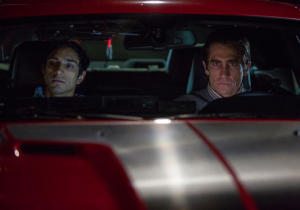 Bloom and his faithful sidekick, Rick

Gyllenhaal is the focus at all times, and he’s eerily plausible as a sociopath. He doesn’t have to speak or even move to express his nature. He just stands there and you’re creeped out. Paxton and Russo do fine work  in supporting roles. But best of all is Bloom’s assistant, Rick, a young guy he hires to navigate while Bloom drives and to operate a second camera. Riz Ahmed plays Rick as a not too bright, soft-spoken kid in desperate need of work. In a way he comes off as unattached to the rest of humanity as is Bloom, but not in a sociopathic way. He’s just a little simple, a little beat down, a little gullible. It’s not easy playing stupid and doing it realistically. Dumb guys inevitably wind up as comic relief, and though Rick has his funny moments, he’s a serious character in Nightcrawler. He winds up providing the only moral base in the movie. It’s a very tiny base, but it’s there. 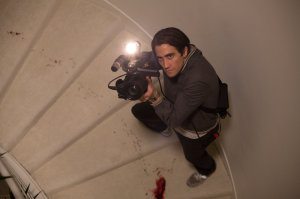 If it bleeds, it leads…upstairs.

As a character, Bloom’s type has a long history. The amoral go-getter who finds he fits in perfectly in a world celebrating morals-free climbers. I only read What Makes Sammy Run?, Budd Schulberg’s classic 1941 novel, a few months ago. It’s the template for this kind of thing, a rotten little bastard, Sammy Glick, who does whatever it takes to make it as a Hollywood producer, and can’t for the life of him understand why everyone else doesn’t lie, cheat, and manipulate the way he does. They want to succeed, don’t they? What gives?

Hollywood. TV news. The business world at large. They celebrate success and don’t care how you came by it.

Nightcrawler also reminded me of a satirical, little known noir from 1950, Shakedown, about an amoral news photographer who buddies up with the local crime boss to get the inside scoop on the locales of upcoming criminal endeavors. It’d make for a perfect double feature.

Nightcrawler is something of a film noir itself. Shot mostly at night by Robert Elswit, cinematographer of many Tony Gilroy and Paul Thomas Anderson movies, it captures a very specific L.A. vibe of endless, interchangeable streets, and the lost souls driving them. Bloom’s no longer lost, though. He’s on his way up. Watch out. 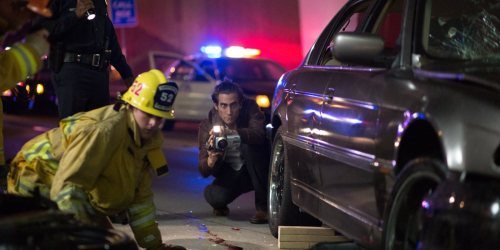 3 responses on “Nightcrawler Is The Best Kind of Creepy”