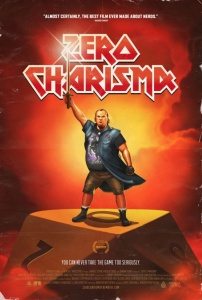 In the mood for a light indie comedy, I decided to watch Zero Charisma (’13), a movie I’d failed to see last year, but one that looked amusing from the preview, about a role-playing game master threatened by a hipster who joins his weekly game.

Turns out it’s not a comedy. Not in a bad way. It doesn’t try and fail to be funny. Most of the time it doesn’t try to be funny. It’s comedic in its presentation, sure. It’s over the top. But funny? No. Mostly it’s sad and scary and disturbing.

Sam Eidson plays Scott Weidermeyer, an overweight manchild pushing 30 who lives with his grandmother and works as a Chinese food delivery man. He listens to death metal, paints model elves, and, most important of all, he’s the game master of a long-running (three years) RPG. But lo! One of this four nerd friends and fellow gamers quits the game (seems he’s got some sort of “wife” he doesn’t want to lose. Some nerd!). Scott needs a replacement. He finds one in seeming hipster Miles (Garrett Graham). 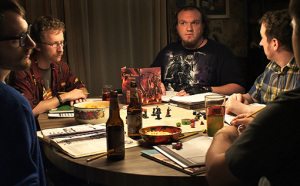 “Seeming” because Miles is well versed in nerd-speak and nerd-knowledge. And he’s funny and charming where Scott is cruel and petty and demanding. A recipe for comedy, perhaps. In the hands of writer/director Andrew Matthews and co-director Katie Graham, though, it becomes a character study of a man facing his own failings and losing his mind.

If they’d wanted to make a movie about a workplace shooting, or the murder of a family by a psychologically disturbed loner who blames the world for his problems, all they’d have to do is film a different ending. Scott, losing the one thing he’s got going for him in life—power over the nerds playing his game—loses his feeble grip on life. The scenes of him struggling to maintain a sense of power over Miles are deeply uncomfortable. His attempts at one-upmanship are sad and obvious, even to his nerd friends. Miles doesn’t have to do anything but watch Scott dig his own grave, which he does with gusto. 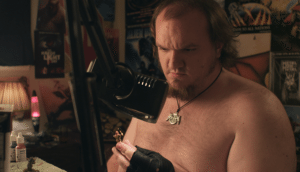 Scott paints his elf, if you know what I mean

Scott’s got other problems too. He lives with his grandmother in his grandmother’s house, but his mom, who abandoned him when he was ten to live in a commune, has returned, and wants to sell the place. She and Scott can’t stand each other. A laugh riot, am I right?

As a character study, Zero Charisma is brutal, and not exactly kind to the gamer mentality. Maybe the directors had some bad experiences with game masters they wanted to work out cinematically?

As a movie, Zero Charisma works pretty well. It doesn’t have much of an ending, and it doesn’t go deeply at all into any character but Scott, but it doesn’t try to be anything other than a brief look at a nerd disintigrating. In that, it’s incisive and unsettling. 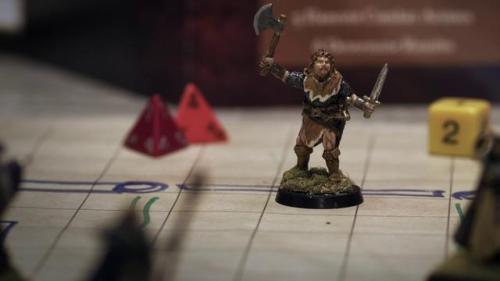