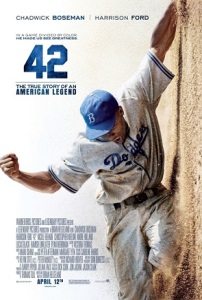 If you are looking for something not to watch, please let me heartily recommend 42, the inert lump of fetid cheese that attempts to capture the story of barrier-breaking ballplayer Jackie Robinson — much in the same way your average district attorney attempts to capture police who are a little too quick to end the lives of black people.

That being: in name only. Without a single iota of understanding of history, or trauma, or the humanity of its subjects.

I, feeling somewhat wretched at the state of racial shittiness in our country, thought I’d try for some feel-good remedy. I thought I’d watch something non-challenging about something we, as a country, managed to get right. I thought I’d offer Jackie Robinson some respect, but obviously no one else involved in making this picture felt the same way. Written and directed by Brian Helgeland, 42 makes Jackie Robinson as interesting as day 12 of the Overcooked Vegetable Conference of America. 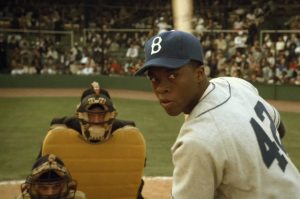 The film is a collection of scenes in which people walk into a space, wonder why they’re there, get told why they’re there, and then walk out. Sometimes they offer an expression that’s the facial equivalent of “gee whiz!” Sometimes, they jump up and down and smash things. But they never enter a room wanting something and then struggle to get it, or feel ghastly at failing to get it.

The story of Jackie Robinson is almost totally devoid of drama. The closest anyone gets to conflict is Alan Tudyk’s redneck character heckling Robinson, and then there’s that one time Jackie and his wife have to take the bus! The bus!!!!! Because, like, sometimes black people had to take the bus in the ’40s. Oh, cruel world.

Everything else — everything that might feel frightening, or visceral, or dreadfully wrong — is conveyed with all the intensity of a Ranger Rick magazine article on the types of clouds. 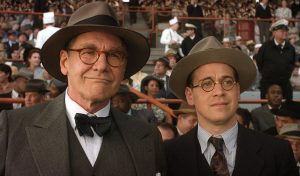 No one wants much of anything in the story about how Jackie Robinson became the first black man to play Major League Baseball. It may seem like Jackie wants to become a Brooklyn Dodger, while he’s on trial with the Montreal Royals; but if you think this, it’s only because he says it. Harrison Ford, as Branch Rickey, says he wants Robinson to make it because when he was a student, he didn’t stand up for a black teammate and boy howdy does he regret that. Yessiree bob. Whoo. Also, Harrison Ford wears a hat and acts like he is understudy to one of the animatronic gorillas in Congo.

It is a deftly nuanced performance from a man who wants people to remember his turn in Indiana Jones and the Kingdom of the Crystal Skull as not his career-defining worst. 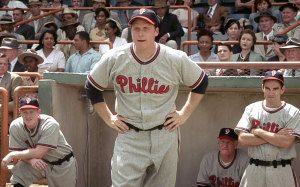 This is what passes for drama.

Chadwick Boseman is mostly just there as Robinson. Other characters might as well have been played by bags of cement for all the challenges the script presents. Pretty much every line of dialogue, every scene would end and I would wonder why it was included in the film.

Spike Lee wanted to make a film about Jackie Robinson. Later, Robert Redford also tried to make it happen. Instead we got Brian Helgeland calling the shots. The result is something you should not watch.