Yesterday was a weird goddamned day. At the end of it, I watched Chris Rock’s new film Top Five. 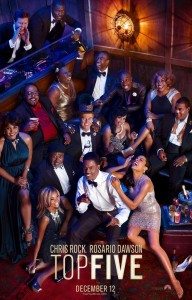 I spent most of the day thinking about Sony Pictures Entertainment. As you may have heard, the studio made a movie called The Interview starring James Franco and Seth Rogan. In it, the two lads play idiot broadcasters who are conscripted by the CIA to assassinate Kim Jong-un. Kim Jong-un, as you may have heard, is the supreme leader of the People’s Democratic Republic of Korea and not only in the land of movies.

He’s a real guy, really the supreme leader of North Korea, and not a fellow known for his rollicking sense of humor. Or any rollicking sense, really, now that we’re getting into it.

A bit ago Sony got its computers hacked open like a promiscuous girl in a 1980’s slasher film. All its business got strewn about the street for any asshole on the internet to poke through. Unreleased films got leaked onto torrent sites. Seriously embarrassing emails between Sony executives and producers revealed to the world how Hollywood behaves behind the curtain —  just as ill-managed, offensively, and idiotically as the rest of us. No one was quite sure who these hackers were, although a connection was drawn between North Korea’s description of The Interview as an act of war and Sony’s humbling misfortune. This connection was drawn despite the hackers demanding money and publicly denying any link to North Korea. 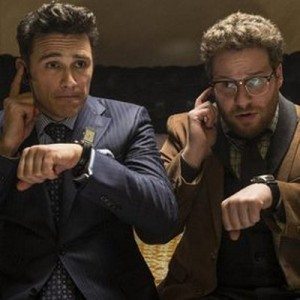 Is it time to call it?

As the embarrassment from the data leak continued, big names blew hard at the media, blaming them for publishing stories about material which was personal, private, and unsanctioned — but The Interview soldiered forward towards its Christmas release date.

Then the hackers sent another email, this one just as hard to parse as the previous ones. It threatened in vague terms any theater that showed The Interview and, by implication, anyone in those theaters doing their best to laugh at James Franco and Seth Rogan, who have been funny from time to time in the past.

Freaks & Geeks is great. It’s also pretty funny when Franco cuts his arm off in 127 Hours.

Although there was no credible threat according to the FBI, cinema chains — when given the opportunity to break their contract by Sony — broke their contracts and declined to show The Interview. That gave Sony the excuse to cancel the film’s release, to claim force majeure for insurance purposes, and shelve the film entirely without taking a loss. Then, afterwards, someone in the intelligence community began to say anonymously but with some definitiveness that they believed North Korea was behind the hacking of Sony. That gave Sony some justification in retrospect, or at least some cover for their lack of fortitude.

This is all kinds of fucked up. All kinds. 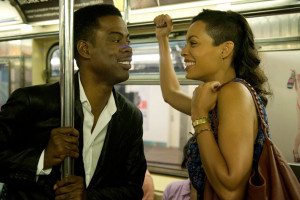 So let’s talk about Top Five for a few minutes. Top Five isn’t going to make any of my top fives. It also doesn’t come close to fitting into my top twenty. Chris Rock is funny, and smart, but you wouldn’t really know it from this picture. It’s a film about a movie star comedian who’s about to be married to a reality television show star (Gabrielle Union). Over the weekend before his to-be-televised wedding, his new movie comes out — an attempt at serious drama — it bombs, and he’s saddled with a New York Times interviewer who wants to get all up in his business. That’s Rosario Dawson.

The screen I saw Top Five at wasn’t busy, but I don’t recall much laughter around me. I didn’t laugh much. Chris Rock can’t really act and his writing and directing need some love, too. The story jumps all over the place, covering alcoholism, the gulf between humanity and celebrity, and single parenting. The pacing is weird and most of the film feels awkward and unsure of where it’s headed or when it can end.

To be honest, I mostly went to see Top Five because of the insightful things Rock said in his recent interview with Frank Rich. I thought if he could put some of that honesty on the screen, this might be my film of the year. 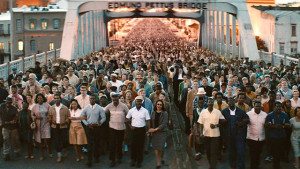 And it didn’t help that right before Top Five ran they showed a trailer for Selma, Ava DuVarney’s upcoming film about Martin Luther King Jr. and the voting rights marches he led in 1965. You may not have noticed, but there’s been some extra-special racial tensions in America of late. Black men and boys have been murdered by white men wearing badges, who are then allowed to go without punishment.

The trailer for Selma made me well up.

Fuck, I thought. It’s been a messed up day, and a messed up month. Would Paramount cancel the release of Selma — also scheduled to open on Christmas — if some racist hooligans hacked into their barely protected servers and threatened theatergoers? You can bet your life Martin Luther King Jr. wouldn’t have backed down. He’d have stood up and taken whatever came and then stood up and taken it again. Even if it killed him.

And the country might have changed because of his strength, for the better. Again. 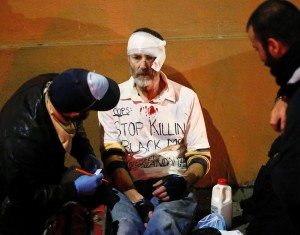 That’s what strength is good for. Those protesters who smashed up the Radio Shack here in Berkeley, California have no idea what they’re doing, blocking the freeway to protest what’s happening in Ferguson and elsewhere. They’re out in the streets inconveniencing others to make their point, but that’s not how you make a point. You make a point by inconveniencing yourself, by showing your commitment to righteousness in the face of threat. You stand up for the abuse and make the world aware of itself abusing you. You make the world ashamed of what it is. You don’t follow Dick Cheney down the road to torture and fear; you don’t let your anger — as justified as it may be — become your face.

Change born of fear is a downward spiral — thanks Sony. Change born of shame is growth; it’s aspirational, pushing off what eats away at us towards something better.

And the world should see itself and be ashamed of what it is. I’m ashamed. 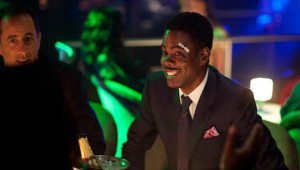 I’m ashamed to be writing about civil rights and protesters when all I do is go on about movies. Movies like Top Five where Chris Rock gives a shout out to Bill Cosby, another black man in the news these days, mostly for allegedly drugging and raping women over a period of decades — since we’re talking about shame. Should I be glad Rock held his ground and left the line about the Cos in, or livid that he didn’t take it out?

When to bend, when to break, when to throw up your hands and let your work go out into the world?

But Sony, canceling the release of a film they made, and paid for, and seemed pretty happy with, because of vague threats which opened them to legal liability. And people pointing the finger at the media for inflating the problem by publishing stories about the leaked data. That makes it sound like if the public didn’t know about the threats, then the film would have been released.

It’s all kinds of fucked up.

It’s Kim Jong-un we’re talking about here (maybe), so no one wants to say it, but can you blame him (if it is him)? If Sony made a film about how funny it would be to have me killed, and I had it within my power to make them all look like a bunch of craven schmucks, and I was a megalomaniacal tyrant who starved my own population to death, and I had access to nuclear weapons — well, what would you do?

I don’t think I’d find the strength to change from the shame born of The Interview. Seth Rogan is no Martin Luther King Jr. and I doubt he was even trying to be. Most likely he was just trying to be funny. I thought the film looked funny, at least, and I normally don’t go for that kind of stuff.

Was The Interview an act of war? Is this threat terrorism? I don’t know. I don’t even know if those are the right questions. Sony made the movie because they thought they’d make money and they cancelled its release because they thought that would save money. If hackers threatened theaters that were going to show Star Wars Episode VII, you can bet your ass that your potential safety would not be top priority. But a Franco/Rogen comedy with limited prospects? 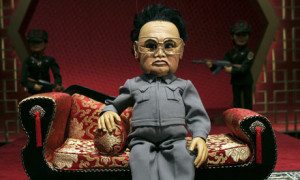 Sounds like Springtime for Hitler to me. And speaking of Hitler, when that gargantuan asshole was actively bombing the world into tiny pieces in 1941 what did Hollywood do? They released The Great Dictator with Charlie Chaplin making fun of the Führer and told Hitler to bring it. Not Sony, though. Not Paramount, who’s not even letting The Alamo Drafthouse show Team America: World Police in place of The Interview — another film that mocks North Korean leaders. And which is really funny and honest.

In Top Five, Chris Rock asks people who their ‘top five’ musicians are. Or at least that’s the question they answer when he asks who their top five are; maybe this is a thing? It doesn’t seem to have much to do with the rest of the movie. Most of the movie is about Rock’s character, Andre Allen, finding confidence in himself without the crutch of alcohol, and about falling for a woman who’s reading books about Cinderella, and lying to him, and whom he barely knows.

Rosario Dawson’s character somehow wiggles her way into the truth of who Rock’s character is supposed to be, and who he’s supposed to be isn’t as interesting as who Chris Rock is. Andre Allen wants to be taken seriously, not because he has serious things to say, but because he’s afraid to fail at what he’s always been good at. Finding himself able to be funny again (but not that funny, I’m afraid), he immediately drops his pursuit of the serious. He — and his film — goes so far as to mock those meaningful pursuits. Not in a Sullivan’s Travels way, which posits the superior power of laughter, but in a shambolic, shoulder-shrugging way, that suggests some people are funny and others should stick to rapping.

If Nightcrawler was the right film made the right way at the right time, Top Five is the wrong film that I saw on the wrong day. Yesterday, someone, maybe North Korea, canceled the release of a major motion picture with a grammatically incorrect email, and Bill Cosby is most likely a serial rapist, and Martin Luther King Jr. is dead — something Top Five attributes to the release of Planet of the Apes of all things — and it certainly seems like it’s no crime to choke a black man to death for selling loose cigarettes, and Chris Rock has so many powerful, intelligent things to say but not in this movie.

I hope Rock makes another movie and dares to get seriously funny; that he doesn’t care about pissing off people with thin skins or angering foreign potentates. I hope no one else gets the idea that all they need to do to get what they want out of Hollywood is to send a threatening email that’s most likely all hot air. I hope black Americans claim the justice that’s their right and that they’ve been dying for for generations. Just writing that sentence makes me feel sick.

And, just in general, I hope my kid can be marginally less afraid and ashamed of who we are and what we do. That’s my top five.