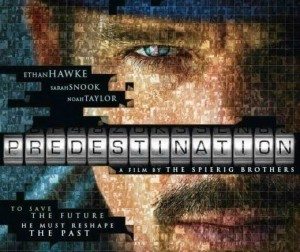 Time machines. What a fantastic notion. A fantastic, impossible, ludicrous notion. You can do anything with time machines. You can do everything. They’re impossible to begin with, so you can make up whatever daffy logic you like to explain your version of it. Your time travel story can be a closed loop, like The Terminator or Timecrimes, it can allow the past to be altered, like Back To The Future, it can be so complicated your brain hurts trying to make sense of it, like Primer, or it can be a massive clusterfuck of impenetrable gobbledygook, like Looper.

If you’re interested in reading some deep thoughts on the many possible (il)logical permutations of time travel, you might enjoy reading this piece on Looper as an intro, and then diving into the discussion below it. If nothing else, I promise the experience will ever so slightly widen your brain. Or time. Or both. 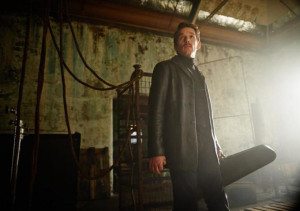 A man and his time machine

The real classics of time travel are those found in science fiction literature, e.g. The Time Machine, The End of Eternity, The Man Who Folded Himself, “A Delicate Sound of Thunder,” and so on and on and on. Which brings us to a new movie called Predestination, based on an especially famous and beloved time travel short story, Robert Heinlein’s “’—All You Zombies—‘”, written and directed by identical twins Michael and Peter Spierig (their third film, following Daybreakers (’10), a vampire flick I have yet to see).

Given its seeming absence of any advertising whatsoever, its release in the chilly graveyard of January, and no listing on Box Office Mojo as to its opening weekend earnings (did I see it in a dream?), I was surprised at how not terrible it is. In fact it’s even better than not terrible. It’s quite generally okay. If I may be so bold as to take such a firm stance. 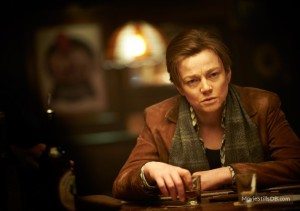 John’s got a story to tell

Everything is a bit strange about the telling of this story. It begins with a man, a Temporal Agent (Ethan Hawke), whose head catches on fire when he fails to defuse a bomb. He wakes up in a slick lab, is given a new face and a new assignment. His job is to travel through time, tweaking things just enough to prevent major catastrophes and generally keeping the world moving along as pleasantly as possible.

He dons ‘70s togs, and using his time machine camoflauged as a violin case, zips back to 1970, where he’s got a job as a bartender. A young man enters. And after quite a bit of bantering tells the Agent the story of his past. It’s a doozy. We might more correctly say “her” past, for so he was at the time. Jane/John is played by newcomer Sarah Snook, and she does a helluva job. This kid’s going places after this performance. 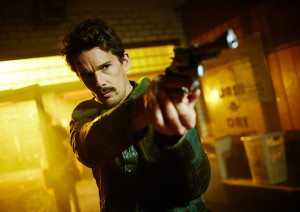 Now, the strange thing is how long his story takes to tell. Movie-wise, its imbued with a feeling of “back-story catching-up,” but back-story isn’t supposed to go on this long. So okay, one thinks, this fella’s story is more than set-up, it’s the whole enchilada. It must be at least half an hour before any more time jumping occurs. And when it does, it’s a jump involving John, relating to his story.

Which is to say, the Agent’s normal course of duties isn’t the focus, though we learn he’s been after a terrorist dubbed the Fizzle Bomber for, well, quite a bit of time, having tried in many ways to prevent his biggest attack in ’75, a bombing in New York City. But this thread isn’t so much dealt with as alluded to until the end of the movie (where a final beat of explanation seems to me oddly absent). 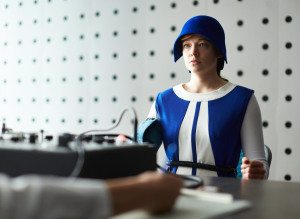 Oh, to be an astronaut’s sex muffin

The story of young Jane is that she was dropped off at an orphanage as soon as she was born. She never knew her parents. She’s an uncommonly smart kid, so it’s no wonder that once she grows up she’s recruited by Space Corps, an organization training young women to be the sex buddies of astronauts on long missions. This threw me a bit. I’m pretty sure I would have remembered if that ever happened. Causing me to wonder if this was supposed to be some kind of alternate reality thing? It’s not. So, right. Astronaut sex buddies. Okay.

Only then the whole sex change comes into play, and we don’t go to space. Space Corps is merely a front (aha, a secret government front, no wonder I didn’t know about it). A front for what? Well, what else? Temporal shenaniganning!

It’s hard to discuss more of the plot without giving everything away. Unfortunately for the filmmakers, they give most of everything away themselves well before the movie’s end. They faced a tricky problem, and failed to solve it. 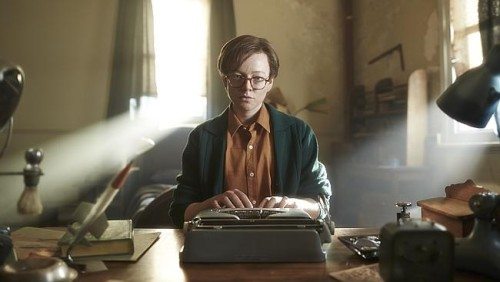 It’s a tough life as a writer

The thing about written stories is that the author doesn’t have to tell you who anyone is. She can describe a character without supplying a name, and she can do so without seeming sneaky or calling attention to her subterfuge. In visual media, it ain’t so easy.

For example, Game of Thrones. In the books there’s this fella name of Jorah Mormont we’re introduced to early on. Soon after, he flees. In another part of the world, a pair of characters show up, one of whom is Mormont. But we the reader don’t know that, because the characters he meets don’t know him. Only when he himself reveals his real name do we see what’s what. It’s a dramatic moment. What to do in the TV version? As soon he shows up, we’ll recognize him. How do the writers solve it? They don’t. They ditch the surprise element and just go with him showing up. 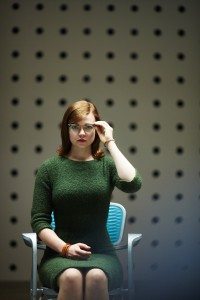 Slighly more plausible as a woman

Or take Blue Velvet, in which Dennis Hopper plays both Frank Booth and Frank disguised as the Well Dressed Man. Lynch pulls it off by only showing the Well Dressed Man once, briefly, from a distance, before his identity is revealed. Any closer and we’d have seen it was Hopper. It works because the disguised character isn’t needed again until the end of the movie.

In Predestination, numerous obviously important characters are from the outset conspicuously hidden. They’re only shot from behind, or the side, or with their heads out of frame or on fire. No doubt, then, that their identity is a big mystery, and given the story that unfolds, their identities become obvious.

Knowing the end of a story before one gets there isn’t the worst thing in the world. In some stories it’s taken for granted. It’s not like we’re worried Indy isn’t going to beat the Nazis, or that the Ghotsbusters aren’t going to melt the Stay Puft marshmallow man. But in a twisty turny time travel movie, catching on to the big reveal early is kind of a bummer, since the movie isn’t about anything else. In a short story, not so much of a problem. On screen, once it all wraps up, it feels a bit empty.

The variety of time travel logic on display in Predestination is the closed loop. Heinlein’s object was to take an extreme look at what such a loop might include, and this the Spierig brothers have reproduced exactly. I can’t say much more, other than that it’s a fun conceit played to the hilt. Unlike something as messy and ridiculous as Looper, Predestination’s logic is simple and clear, and still manages to be a bit of a mindfuck as you trace what goes where in time. Once you do, of course, you’re where you always are in a closed loop story where the future influences the past: asking where it begins.

To which there is no answer. It is a loop of time. It’s all there, past and future. What happens always happens. There’s no “beginning” and no “ending.” It just is. And what it is, in the case of Predestination, is pleasingly, logically ridiculous.

5 responses on “Predestination Eats Its Own Tail”