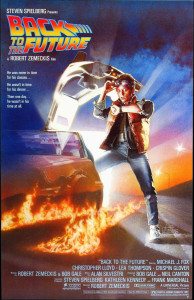 One needn’t go very far out on a limb to say that Back To The Future (’85) is a fun movie. You could say it without so much as climbing a tree in the first place. You could be a hundred miles from the nearest tree, in a desert, with nothing but a lone tumbleweed to keep you company, and the tumbleweed could blow away, and still it’d roll off your tongue. Not the tumbleweed. The tumbleweed blew away. Your liking Back To The Future, you could roll that off your tongue. No one would blame you. What are they going to say? That it’s not fun? They wouldn’t dare. You’d hit them over the head with a shovel. Because you also have a shovel in the desert. Why? For this very purpose!

I saw Back To The Future when it came out, along with every other living human at the time. Dead ones, too. People exhumed the corpses of loved ones and brought them along, they were so crazy for this movie. I’m pretty sure I remember that, anyway. Of course I was 14 and had just discovered frogging, so I might be wrong.

(Frogging: the crushing into powder and snorting of pellets filling a particular brand of stuffed-animal frog sold between ’84 and ’86, popular among the 12 to 15 set until Geraldo Rivera blew the lid on it.) 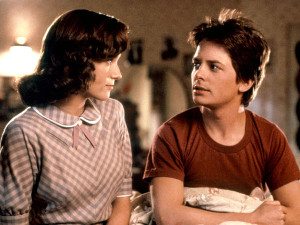 It made boatloads of money, was the number one movie for weeks on end, people were gorging on Huey Lewis & The News records, it was madness. I saw it over and over again. I saw it so many times I never had to see it again, or so I felt sometime around the early ‘90s, give or take.

I felt this way about many movies from my youth. I watched them till my VHS tapes cried out in agony, begging for peace, then put them aside, having seen them enough to last a lifetime. After which I got older. I didn’t mean to. But here we are. And in the past few years I’ve been returning to many of these movies, ones it’s now been fifteen or twenty years since I last watched, to watch them with new eyes. Or old eyes.

Some hold up. When I saw a beautiful 35mm print of The Road Warrior a few years ago it more than held up. I was floored. People stood up and cheered. We’d been force-fed CGI action crap for so many years we’d forgotten what a real action movie looked like.

Others hold up less well. Try watching Indiana Jones And The Last Crusade and know boredom. On the other hand, watch The Temple of Doom and find yourself pleasantly surprised, albeit no less eager to throw Kate Capshaw to the crocs.

Revenge of The Nerds is, if nothing else, fascinating. Critters, less so. And it looks like it’s time to check out Heathers again. 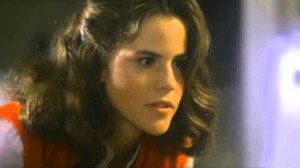 Oh, you adorable kid, you.

I watched WarGames the other night, another favorite from my teens, and was mightily impressed. It’s a smart movie with something to say, shot with that not-yet-‘80s look movies had until about ‘83/’84. The ‘70s style lingered visually, even if the stories had clearer plots, happier endings, and kid stars. Matthew Broderick and Ally Sheedy are so damn adorable, I wanted to gather them up in my arms and rock them to sleep. Come to think of it, thanks to WarGames, The Breakfast Club, and Bad Boys (Bad Boys! With a young Sean Penn. I wonder how that one holds up?), I was desperately-14-year-old-in-love with Ally Sheedy.

But so anyway, getting back to Back To The Future, which I saw a few days ago in a theater for the first time in ages, it plays exactly like it did in the ‘80s. It’s a perfect piece of pop moviemaking. It’s not challenging, it’s not deep, it’s as fluffy as cotton candy, and it’s completely charming from start to finish. It’s the best movie Robert Zemeckis ever made (though I haven’t seen Who Framed Roger Rabbit? in forever. Maybe I’ll watch it on a double bill with Bad Boys). Strange that it almost wasn’t made at all. 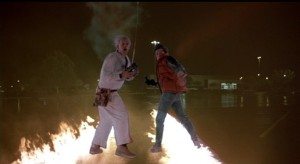 It amazes me that studio execs to this day continue to believe they know what kind of movies will be successful and what kind will fail. They’re amazingly, consistently wrong. I have always contended that if execs allowed artists to make movies the way they wanted, we would have on our hands the same number of bombs and the same number of hits. The only difference would be that in both cases we’d be seeing far more original, weird ideas.

Back To The Future was ready to roll in ’81. But Columbia Pictures said no. They thought it was too family-friendly, what with the big teen movies of the early ‘80s being full of sex, like Fast Times At Ridgemont High (still great), Risky Business (fantastic), Porky’s (how in god’s name did this movie make money? Oh, right. Shower scene. If you have any fond memories of this movie, do not under any circumstance watch it again, ever), Revenge of The Nerds, and Zapped! (I dare someone to rewatch Zapped! and report back). 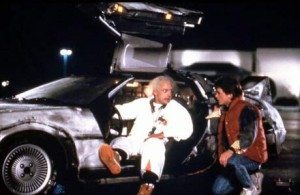 Better than a refrigerator

Give your sweet little family film to Disney, said the other studios. Disney, however, wasn’t so keen on a movie about a kid’s mother coming on to him. Go figure.

Finally, with Spielberg producing, Back To The Future was given the go-ahead. Fun fact I never knew: in the original script, the time machine was a refrigerator. Marty McFly powers it up in ’55 by bringing it to an H-bomb test. Which scene, you will with a certain amount of pain recall, was repurposed by Spielberg for that Indiana Jones sequel we’ve all spent the past six years pretending doesn’t exist.

But egads, said someone or other, what if kids start locking themselves in refrigerators? Not a bad point. A DeLorean was chosen instead, and thousands of rare car collecters rejoiced. 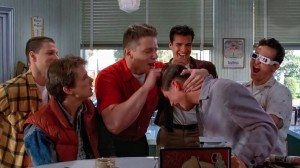 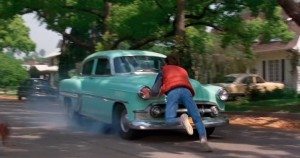 The story is simple. You might even recall it. Doc Brown (Christopher Lloyd) builds a time machine out of a DeLorean, but is shot dead by terrorist Libyans for stealing their stolen plutonium. Marty McFly (Michael J. Fox in his first starring movie role) escapes the Libyans in the time machine and winds up in ’55. First thing he does is screw up the storied meeting of his mom and dad. He needs to make sure they kiss at the big dance, then he has to get himself home in the DeLorean and warn Doc of his future murder. His fix of history changes his present and he finds his family rich and successful, and Doc wearing a bullet-proof vest. The end.

The script, by Zemeckis and Bob Gale, is tight and witty. Every bit of dialogue and every bit of business in the opening section of the movie plays into the past section. It’s all tied up as neat as can be. The conception of time travel is simplistic and silly, but so what? It’s not about the philosophy of time travel.

You tell him, McFly!

What is it about? It’s about the idea of meeting your parents when they were teenagers. Nothing else, really. It’s enough. Crispin Glover almost steals the movie as Marty’s dad, George (“almost” because weird and wonderful as Glover is, Lloyd is huge in this movie). Lea Thompson plays his mom as a sex-hungry, partying seductress. As family-friendly as this movie is, bad guy Biff (Thomas F. Wilson) attempts to rape her in the front seat of a car. It’s not all innocent fun in ’55.

Not to mention ’85, in which Doc is gunned down, a pretty scary scene for kids. At least in them days. Nowadays Superman kills millions and audiences cheer.

Back To The Future epitomizes the ‘80s movie vibe. It’s bright and cheery, it’s funny and nostalgic, and it has a happy ending. It’s pure escapist entertainment. It’s the kind of movie everyone was trying to make at the time, and still is, in many respects. Few pulled it off as smoothly. I doubt I’ll watch Back To The Future again for another twenty years. But when I do, I know I’m going to like it. 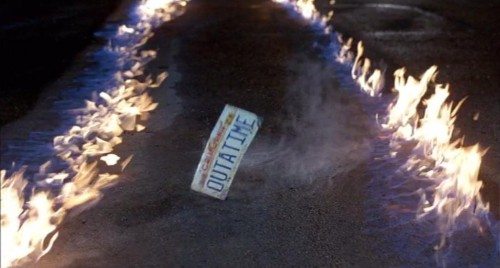 One too many letters, but we’ll let it slide.

2 responses on “Going Back To Back To The Future”