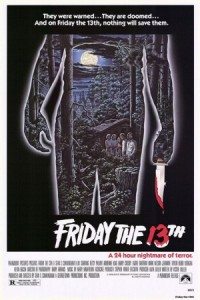 Do you know what is not nearly as funny as The Texas Chain Saw Massacre? That’s right: it’s Friday the 13th, a film as gelatinous as baby poop and only marginally less endearing.

As part of my ongoing attempt to catch up on all the horror films I avoided growing up, I thought, sure, why not? I’ll put my eyes in front of this. Maybe it’s kind of scary? Maybe it’s creative? Maybe there are attractive young people making rumpty-pumpty?

It’s got to have something going for it, right? 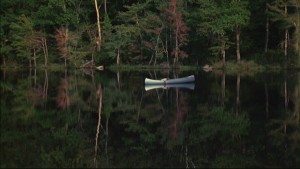 Watch out for snapping turtles and alien nanobots.

Friday the 13th is, after all, one of the most successful franchises of all time. Based on the plot summaries I just read on Wikipedia, these dozen films and the other associated Friday the 13th crap, taken as a whole, make about as much sense as anything that happens in the Marvel Cinematic Universe. Why wouldn’t I expect to find something to love here?

If the internet can be believed, over the 35 years Jason Voorhees has been hacking up camp counselors as an alternative to learning how to swim, everyone’s favorite hockey-masked demon-man has gone to hell, battled Freddie Kruger, gotten resurrected by nanobots, stolen an infinity gem, and won the Stanley Cup. He has killed more people than Mecha-Stalin and lax hygiene standards combined. 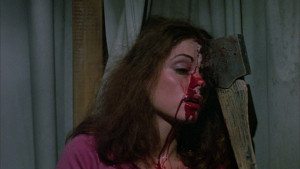 Do I have something on my face?

But in 1980, that was all just a beautiful dream. All producer / director Sean S. Cunningham wanted to do was piggyback on the success of John Carpenter’s Halloween by making a slasher film starring a mostly unseen antagonist.

I’m not a huge fan of Halloween, but compared to Friday the 13th, that film is Raging Bull. Friday the 13th sucks eggs if those eggs have been gestating inside an inner tube filled with rancid cream cheese and biting spiders. 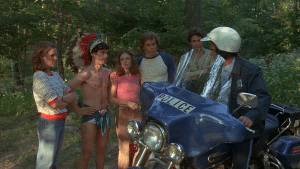 You. Kevin Bacon. I won’t warn you again about insensitivity to Native Americans.

Writing about it is making me depressed. One would hope that cinema audiences would have had the taste to recognize this as crap and relegate it and its characters to the crematorium, but no. Twelve films leaping off the back of this turd like fleas off a rodent’s corpse.

When the film begins, there is a bit of hope. Spunky and cute Annie (Robbi Morgan) hitches a ride out to Camp Crystal Lake, despite warnings from the local locos and the clunky prologue in which amorous counselors, back in the 50s, get all killed and stuff whilst attempting to bone. We then meet a slew of other counselors at the newly reopened camp. Some have a character trait, like the idiot who acts like an idiot. Others are Kevin Bacon. They do fascinating things like pretend to drown and fix gutters. 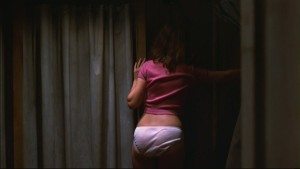 Worst episode of Let’s Make a Deal ever.

Also, one by one, they get killed by a mysterious slasher — starting with poor Annie, the only character in the film you’d want to get to know or watch disrobe. Her inexplicably early death is your first and clearest warning of what’s to come: nothing good.

These scenes of bloody mayhem are captured with the artistry and attention to detail one usually reserves for spitting tough meat into a napkin. Because all of the counselors are off on their own when they get butchered, none of them knows what’s coming and this makes these scenes interminable instead of tense. Harry Manfredini’s score goes “ki..ki..ki..ma..ma..ma..” and then someone gets introduced to the pointy bit of a hatchet.

Throughout all of this, what’s most remarkable is that I thought this film would be scary when I was a kid. The only way this film could be less scary is if you acted it out with balloon animals. 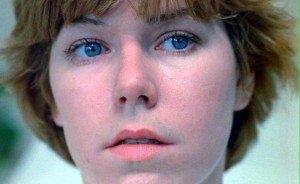 All I wanted was a tan.

Anyway, they all die. And play strip Monopoly. Kevin Bacon gets laid because he was Kevin Bacon, even back then. The final survivor, Alice (Adrienne King), is the only one to discover that all of her peers have been slaughtered. Kids these days; no awareness of their surroundings. Then we get a final half hour of Alice trying to defend herself with a weenie fork against the now-revealed killer.

And that’s the one thing I liked about Friday the 13th, which is, if I haven’t been clear, a terrible terrible ghastly terrible film. It is also, I guess, a spoiler so if you’re going to watch this dreck and will be doing so without a sense of humor, look away now. 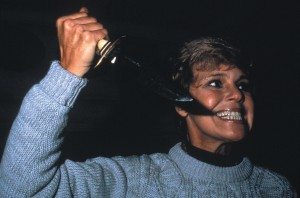 THE LITTLE FORK IS FOR SALAD!!!!

The killer, despite all the now-ubiquitous hullabaloo about Jason Voorhees and his hockey mask, isn’t Jason Voorhees; it’s his mother, played remarkably well by Betsy Palmer. This middle-aged lady, crazed with grief over the avoidable drowning death of her son, has been killing people for decades. She is, in her performance and in her incongruity, genuinely creepy.

For about thirty seconds.

Then you wonder why Alice doesn’t just keep bashing her head in with that skillet or, I don’t know, kick her in the shins or something. She’s just someone’s mom, in her mom sweater — and, yes, obviously off her nut — but still acting as angry as your friend’s mom when you accidentally spilled grape drink on the living room sofa.

Friday the 13th takes place on a Friday the 13th, which is awfully convenient as otherwise there’s no connection between the film’s title and the story. It, as a film, proves there is absolutely no need to spend any energy building character or story because people will go and see anything if it seems like it might be familiar.

We’re awfully dumb that way. See you at the new Star Wars movie.

4 responses on “A Brief Stab at Friday the 13th”