We are living in strange times. Today, you can go to pretty much any cinema and catch a showing of a film about a talking raccoon who, with his buddies, saves the universe from a piece of tacky jewelry. Despite how odd that sounds, Guardians of the Galaxy, the latest from Marvel Studios, has been seen by everyone and everyone seems to adore it. 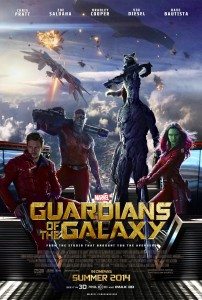 The film is funny. It’s moving. It’s got space adventure and sexual innuendo and a tree-thing that sort of talks and every other scene takes place in the craziest damn place you ever saw being destroyed by some sort of just hacked together ultra-destructo gun. It has all of the elements of an epic adventure and I enjoyed it. Or I did as much as one can enjoy a film about a man who wants to obliterate a planet with a giant hammer.

But can we keep things in perspective?

I must protest most vehemently — although Kumail, whom I’ve never met, has the weight of public opinion on his side. Guardians of the Galaxy is a great Marvel Studios film. It is a perfectly enjoyable piece of summer entertainment. But it is in no way good enough to even shine the shoes of Raiders of the Lost Ark, one of the most satisfying adventure films ever made.

That’s what confuses me when I see these comic book pictures and then read the critical and audience responses. Have these people never seen anything but what’s currently in front of them? Are we now so susceptible to hype that off-hand references to 4th-tier comic book characters elevate a film to exalted status? 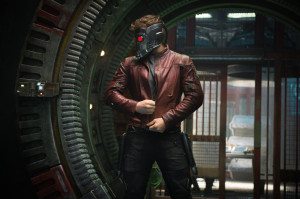 Because let’s be clear. As much as we may enjoy mowing down some popcorn and watching Guardians of the Galaxy — which is a film with some solid humor, a pair of cojones in the dialogue department (an image I’m sorry to drop on you), and many other things to appreciate — it is a film about really, really, really stupid things.

At its core, Guardians of the Galaxy introduces us to a man who robs graves and happens upon an object of theological importance — a weapon of god. That does not make it Raiders of the Lost Ark.

In Raiders — and even in its lesser and increasingly lesser sequels — the mythology means something. We know and respect what the Ark of the Covenant represents. So too the Holy Grail. With sankara stones and crystal skulls, Spielberg and Lucas depend on our imaginations and have debatable amounts of success. 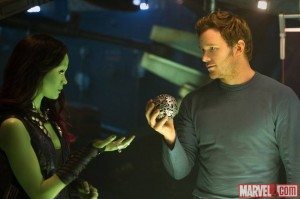 In Guardians of the Galaxy, a host of Marvel comic book mythology is dumped on us and quickly at that. This is because the mythology is so overwhelmingly idiotic that if you have time to consider it, you’ll start throwing your jumbo-sized sodas at the screen. There is a demi-god sort of thing called Thanos that wants infinity gems, which contain cosmic power. One of these things ended up with Loki in The Avengers as the tesseract, but if I started spelling out all of this stuff, I’d be doing Marvel’s work for them.

That is something I have no interest in doing.

I want to watch films that stand on their own. I don’t want to have to watch all 25 James Bond films and read the novelizations and follow the TV spin-offs to understand why Auric Goldfinger had his eye on Fort Knox. I might be glad to do so, but I don’t want to need to do so. In Guardians, even if you’ve watched all the Marvel films, you’re out of luck. They are — by design — forcing you, on your own time, to research the story you’ve paid to hear told just to understand what’s essentially incomprehensible. They want you to beg them for advertisements and tie-ins and receptacles for your money and energy so that you might feel satisfied.

You will never feel satisfied. That’s the ‘genius’ of the Marvel Studios’ mega-franchise.

Here’s the set-up, though: Thanos (Josh Brolin) has tasked some Kree psychopath (Lee Pace) to use Thanos’ kidnapped-into-bondage ‘daughters’ to steal an infinity gem from Peter Quill (Chris Pratt), who’s just walked onto some dead world and picked it up while working on behalf of space pirates, whom he’s planning on double-crossing, but bounty hunters — a genetically altered raccoon (Bradley Cooper) and a tree-thing (Vin Diesel) — try to capture him for the space pirates who want to sell the magic bauble to some other weird space nut (Benicio del Toro) but, getting his mitts on the gem, the psychopath decides he might as well just keep it to enact some half-explained vengeance against Glenn Close’s hairdo and the universe-at-large.

It may not sensible, but it is fun.

Because Thanos — the villain, right — is the sort of guy/god you can just double cross and forget about, particularly if you have an infinity gem.

Thanos doesn’t have any infinity gems, see? Loki had one. This Kree guy has one. Peter Quill had his hands on one for a while. But Thanos? The overarching villain? He has big teeth and a silly helmet and a chair on a space rock but no infinity gems.

So it’s all clear, right? Thanos is the big bad guy who exhibits no badness or bigness or competence; instead he uses Ronan — the Kree psycho — to get the most valuable thing in the world, who in turn jobs the task out to Thanos’ ‘daughters’, who are with Ronan on loan — which is just how you’d do it if you wanted something cosmically precious that was just sitting in a decrepit hall on an uninhabited world, there for the stealing by pretty much anyone. Then when it all goes south you’d just disappear out of the film to be just as impotent in the sequel. 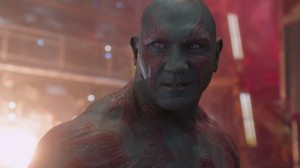 This is Drax. His superpower is being a bad motherfucker.

It’s bad writing in support of a complex structure of films that mirror comic books written for pre-teens thirty years ago. It’s bad writing by design, because that bad writing leaves you unsatisfied and wanting more, in the misguided hope that more will deliver clarity.

Reminds me of Lost — another property I enjoyed watching and discussing, but which, in retrospect, took more from me than it gave. It was a story that didn’t respect me.

In Raiders of the Lost Ark, the villains were Nazis. A slew of them worked to recover the Ark of the Covenant with the help of the morally flexible Frenchman Belloq. In the end, the unknowable power of the Ark proves too much for anyone; it must be left alone or your face will melt.

What does that suggest to you about the grasping of mankind? What does it teach you about Indy? About yourself?

Marvel films are not satisfied with melting faces, though. They’re betting people want to see the Ark and the Holy Grail and the sankara stones and a couple of crystal skulls pulled together to make some uber-villain into a god-thing over a dozen films so a team of Indiana Jones substitutes can battle an unbeatable being and defeat him, but not thoroughly enough to destroy sequel potential. They’re betting that audiences won’t notice that the uber-villain has been lackluster, intelligence-wise, with a plan as complex as “me want.” They’re betting that if this ‘Marvel Cinematic Universe’ doesn’t ever end, they’ll avoid the failings of Lost.

That failing was the lack of meaning. Here, too, everything lives on the surface level, with tone and call-backs mimicking depth. 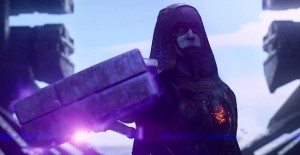 Do not mess with my space jewelry.

There are fun scenes with wry dialogue. There are crazy characters who find time to manufacture romance and drop bon mots. There is a lot of fun, but there is nothing to fear and no depth.

What does Peter Quill have to lose? Nothing. Why do we care about Nova Prime and the Nova Corps homeworld of Xandar? We don’t.

It isn’t. It’s as good as the first half of Super 8. It’s better than Independence Day, or The Last Starfighter, but not as compelling as Tron, or District 9, or even Inception. If all you’ve seen lately is Captain America: The Winter Soldier, though — and you bought the line about that film being a gritty ’70s-style thriller — then you’ll be overjoyed with Guardians.

I don’t want to write this review. It feels awkward, like I’ve been dating a woman I know isn’t right for me, but with whom I can’t manage to break up completely. She’s foxy enough, and an engaging conversationalist, and we have fun together doing preposterous things — but she doesn’t make me sing. When I drop her off at the end of the evening, I don’t miss her. I don’t lie in bed thinking about the ideas she inspires within me.

Guardians of the Galaxy is either the best Marvel movie yet, or the newest, or the one you haven’t seen. Chris Pratt is likable as Star Lord. Most of the other characters were not talking raccoons. I laughed a few times. There were a few elements of the production design I found interesting. I swept along from start until finish without the urge to leave the theater or even roll my eyes.

It is perfectly decent. I hope you see it, and enjoy it, and then you go watch Raiders of the Lost Ark or The Road Warrior or Time Bandits and lean on Marvel Studios. They’re working with as much talent and money as the world has on offer. There’s no reason why these films can’t be as good as the very best of them. Why we can’t get a character like Marion Ravenwood instead of Gamora. Why our villains can’t have aims that scald us with their diabolical cleverness instead of making us snigger into our fists.

Making films that satisfying is hard, but what it takes more than anything is the will.

Calling Guardians of the Galaxy great depletes the world of will. Love it. See it often. Then demand more.